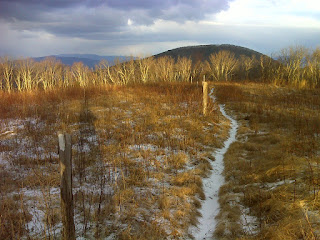 I visited both today (Monday, March 5th). Above is what I call Mini-Patch, which was one of the highlights of the morning leg north from Limony Gap (sorry, Lemon Gap). It’s a small ‘bald’ or field atop Walnut Mountain, and just feet from the old drafty 1938-vintage shelter of the same name.

Among the other highlights of this morning’s adventure was snow. It had snowed a bit overnight, but the main event came during an hour of fog and wind and dropping temperatures between 9 and 10AM. About an inch fell on the high peaks – not enough to seriously affect hiking conditions, so on I went. 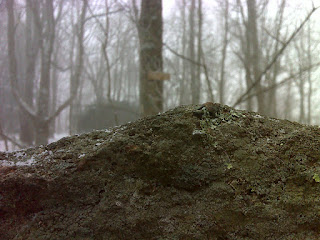 The turn-around point for this leg was the summit of Bluff Mountain, which, for the record, I put my finger on but did not actually stand on—it’s a bit too small for that.

Here I met NC State students Alex, Holly, Tham, Steve-O, Graham, Rebecca and their dogs Mogley, Biscuit and Hugo spending their spring break on the AT. Hugo seemed locked in a one-dimensional world, and was deathly afraid of passing me. Yet he would not leave the trail to do so. Finally mustering up all his courage he made a hilarious, crazed-eyed, full-speed dash past me.

This gang had spent the night at Roaring Fork Shelter and were headed to Walnut Mountain Shelter tonight. I’m afraid they would find the new accommodations rather less appealing. Roaring Fork is roomy and new and in a protected valley. Walnut Ridge had accumulated snow on its sleeping platform and wind-sculpted snow drifts all around. I’m betting it was a cold night for them, with a forecast low of 22 degrees. Fortunately by midnight the wind was relenting. 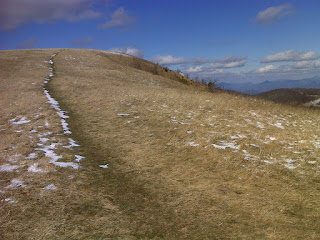 Meanwhile, on I plugged. And soon the day’s crowning jewel came into view – Good old Max. In this iconic photo, which I’ve seen on AT guide books, the trail shown isn’t even the AT! The shot is indeed taken standing on the AT, but is of an (unnamed, as far as I know) lesser trail that follows the brink of the steep right-side slopes to the summit. 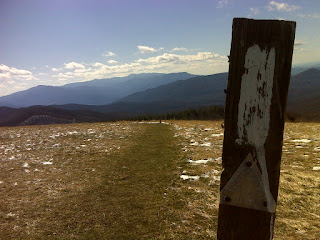 It was still windy up there on the summit, but the crisp new airmass that pushed in after the morning snow was pure cerulean crystal. As I had on Bald Mountain a few days ago, I found myself wishing that the earth was flat, so I could see Kilimanjaro and Mt. Everest poking up above the tropical hazes of far-off continents. As it was, I wished I had a guidebook to point out all the names of the peaks. The Smokies, with Clingman’s dome dominating everything else, were not hard to identify, and in the opposite direction, a gleaming bald in the distance was probably Grassy Ridge, barely noticeable in the center of the reduced-resolution image: 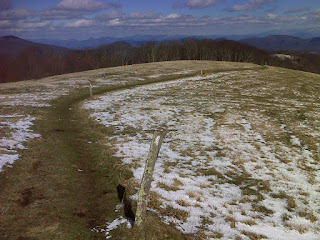 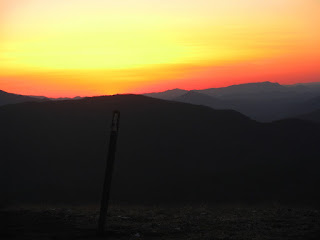 I turned around at Max Patch Road and did the summit all over again, and enjoyed it so much the second time that I came back for a third. The parking lot is just a ten minute walk from the summit, so I ventured up there again and caught the sunset. If you look closely you can see the aerial navigation tower atop Snowbird Mountain just above the post and to the right of that last glimpse of sun. 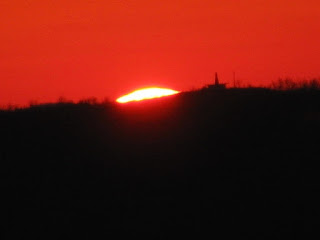 Max Patch is considered one of the North Carolina balds, but that’s a fraud. It is just a farm; it was originally all wooded. Well, we can forgive those who lump it in with Hump Mountain (my favorite by a wide margin), and Big Bald, because it’s every bit as spectacular.

Here's the route of today's long sojourn - a memorable day. Embedded in this track, if you click the link, are a bunch of additional photos.