Hiking Patagonia, Part 4 of 4, French Valley and the End of the World


My last day in Torres Del Paine National Park started out with rain and gray skies.  I had rearranged my schedule in order to stay an extra day and do this last significant hike, to the French Valley lookout beside the massive Paine Grande peak.  Forecast was for the weather to improve, and thankfully it did.

The hike begins with an hour ferry ride the length of Lago Pehoe to Paine Grande Refugio, a major campground and lodge that is not accessible by overland vehicles.  Everybody huddled in their vehicles at the Ferry terminal rather than waiting in line at the boat ramp, in order to stay out of the wind and rain.  But by the time we arrived at the Refugio, as you can see below, the weather had improved. 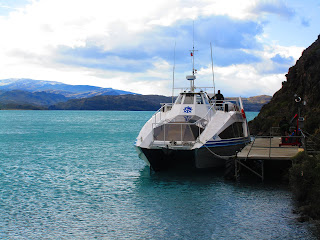 The challenge of this hike is less about the elevation change and more about the need for speed--to get there and back in time to get in line (the boat has room for 100) for the last afternoon ferry ride at 6PM.

The first part of that challenge is that the ferry doesn't arrive at the Refugio until 10AM.  Then off we marched - me, guide Nino and a 40-something American couple named Sara and Paul.

The first part of the hike undulates along the slopes beside picturesque Lago Skottsberg. 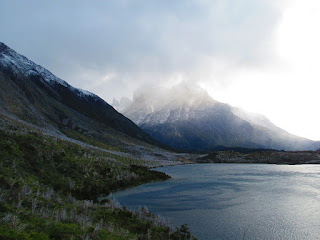 To the right is the lake, with views of the Cuernos beyond (I had close up views of Los Cuernos peaks on my previous hike, see part 3) and to the left the great mountain and most of its glaciers were shrouded in cloud, out of which pour a number of cascades. 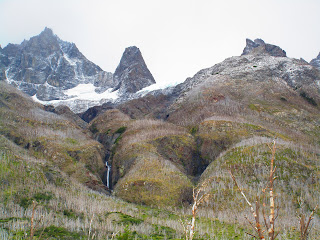 The next delay came once we actually reached French Valley.  We had to wait in line at the suspension bridge across the French River in order to get across to the Italian Camp, a busy hiker campground.  People were lined up to cross both ways and the strict rule is that only one person is allowed on the bridge at a time. 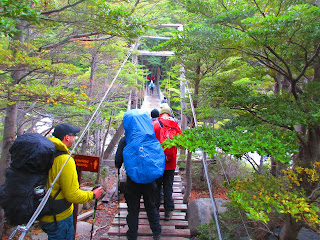 From Italian Camp the French Valley trail climbs several hundred feet to the panoramic viewpoint of the glaciers up on the grand peak, 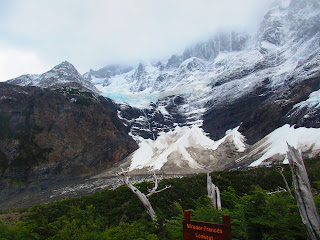 with views of the valley between Paine Grande and Los Cuernos, of the Cuernos themselves, and of Lago Nordenskjold and the landscape behind us down the valley. 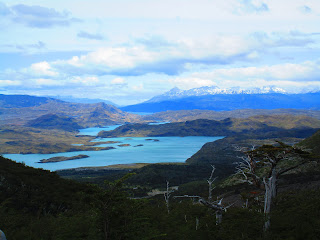 The clouds continued to lift over Paine Grande as we returned to Italian Camp.  Better yet, there were no lines waiting to cross the footbridge so I could stop in the middle of the bridge and take a photo of the French River and the mountain slopes and glaciers beyond. 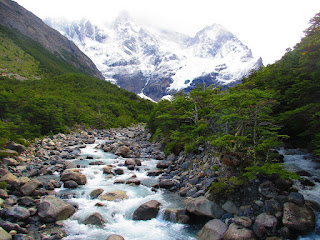 Checking the clock at that point, it was clear that we had to make time.  Five miles back to the ferry landing with two hours to get there.  I took the lead because I have a natural pace that would get us there on time, and Paul and Sara were troopers, keeping up that pace, even when I stepped it up another notch.  Nino, of course, was just strolling along in back.

The boat was coming up the arm of the lake as we came up over a rise and into view of the Refugio, so we were able to get in line in time.  As we waited in line, the Grand mountain finally revealed herself. 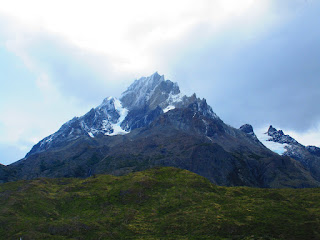 A fitting end to the day and to my Patagonia adventure.

Next it was on to 'Fin del Mundo' - the self-proclaimed 'End of the World' at the town of Ushuaia, Argentina.  Plans were to continue my travels, but it was in Ushuaia that I got the news of my Mother's sudden illness.  I had an afternoon and the next morning here.  I started by walking from the airport to the motel. 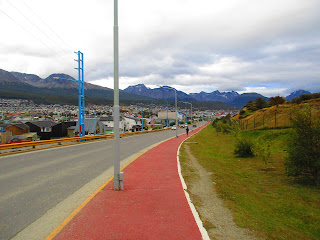 This is a town that embraces outdoor adventure despite the famously brutal Cape Horn climate.  Fall had arrived with snow in the mountains, but the denizens were unfazed. 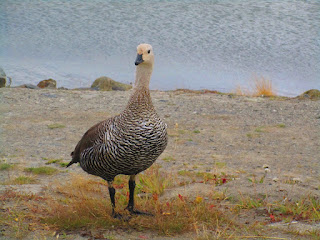 Tourists were lined up to get photo-ops at the town's iconic visitor sign, but I managed to get this shot when one celebrating group left and before the next one assembled in front of the sign. 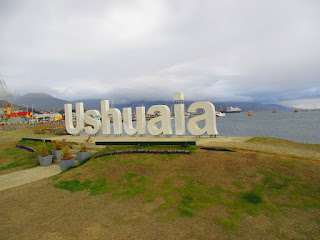 Many are here for Penguin tours, for Antarctic Cruises, and for various hikes and treks.  There were a couple of cruise ships anchored in the harbor, but one or two others that didn't look like they were going anywhere anytime soon. 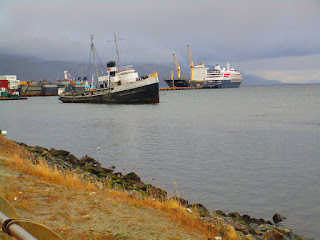 Finally the next morning, as I had an early breakfast at my motel's penthouse dining room, I was treated to one of the most vivid sunrises I've seen anywhere. 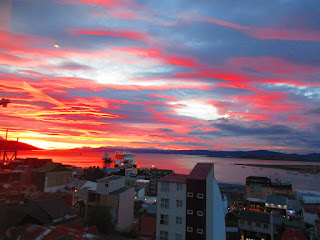 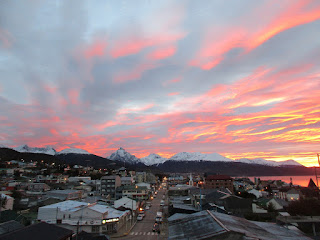 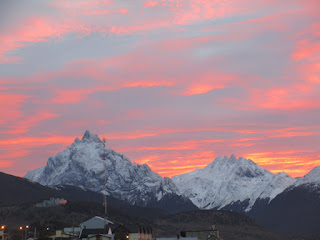 Then it was two days on airplanes to get back to family.  I had a chance to say a loving good-bye to Mom and to fulfill her request to trim my beard to a length she thinks is more befitting a PhD scientist, and then to recalibrate my life.

Next it's back to the domestic trails, to resume my oft-delayed quest to hike to every place I've ever lived.  Reports will begin soon.
Posted by PJ Wetzel at 9:00 AM