This is my long-distance-hiking overview and information page.  It's the one place to check to find out where I'm hiking, my goals, and my progress toward them.  When I'm out on the trail, this page—especially the map—gets updated daily.

I've set five basic rules for my hiking.
This link takes you to an overview map of all the Personal Continuous Footpath hiking I've accomplished since acquiring my first GPS back in June 2010, courtesy of Wikiloc.  That map shows, day-by-day, where I’ve been. I keep it updated daily as I hike new places.  I used to be able to embed that map here, but for unknown reasons I can no longer get it to work properly (perhaps the file has gotten too big).

Looking to the future, here's the current version of my big picture goals/dreams.  I've designed a continuous route, which I've called the 'Fifty Trail' (this is a link to the trail guide).  It includes a generous piece of every one of the eleven National Scenic Trails, and every one of the 50 US federal political divisions on the North American continent.

Below is a TABLE of the miles hiked by year.  It only covers the years since I bought my first hiking GPS in June 2010 (when I started recording the tracks of every hike). 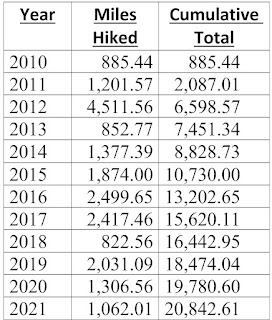 And now, for more detail.  Here's a chronological list of named trails (in bold) and other hiking locations, and dates hiked.  At the end of the list are planned hikes, not yet completed.


, June-Aug. 2015.  Forced to discontinue completing this trail by a major forest fire.


The title of this page, "Hopping Rocks," refers to leaping from stone to stone to get across a stream.  In my case, the stream is a metaphor for life, with its restless ever-changing currents.  Each stepping-stone represents a meaningful landmark along the way, such as a place where I lived.

Obviously it's not just getting across to the other side of the stream that matters.  Each rock I choose matters, and the way I get there matters too.  I want to hop the rocks, using my two feet, not get in an SUV and roar across throwing a wake of splashing water into the air.

Why hop the rocks?  Just because I love to walk, because I love nature, and because walking is the most natural way to go.  Because the rocks give my walking meaning and purpose.  Suddenly I'm not just wearing out rubber on a treadmill.

Below are two views of one of the major stepping stones—my boyhood home from 1958 to 1966: 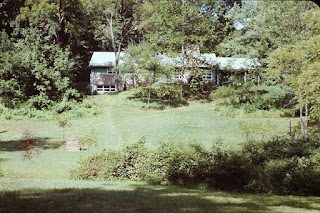 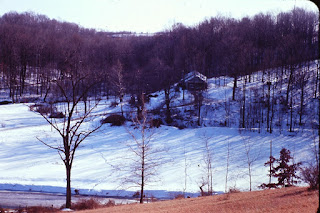 Situated on several acres of farmland along White Clay Creek near Landenberg, PA, it was a magical place to grow up.  No one place defines me more.

I first returned there on foot on July 17, 2011, via a series of road walks, including a long stretch of the famous US Route 1, starting from my home about 20 miles west of Baltimore MD.

It was a small hike in terms of distance—a hundred miles or so—but it was huge in personal significance. Not only did it expose me, unhindered by vehicular shell, to places full of deep memory, but it was fulfilling a need I didn’t even know I had until I was more than sixty years old.

I immediately knew I wanted to do more of the same. It gave purpose and direction to my favorite sport—walking. Walking is healthy. I'm convinced that there's no better exercise.

But doing "exercise" bores me to tears. I cannot and will not waste my time and energy just 'staying in shape'. People on exercise machines in gyms remind me of hamsters on spinning wheels. They seem so self-absorbed—fixated on their own bodies and oblivious to the stimulating outside world that they're missing. Even going out and walking the same circuit in a park quickly loses its appeal for the same reasons.

I need fresh new vistas. I need a real sense of purpose and accomplishment. My answer is to walk home.

Yes I know the old saying: "You can't go home again."  The place has changed and so have you. It's true ... up to a point. But the poor blokes who say that are pessimists, brooding over the dreary bottom of their glass through its half-empty swill and entirely missing the wider view.

I want to illustrate what I mean with two examples.

In 1959, at the home shown above, I planted a tiny sprig of a tree, a few inches high with maybe three or four leaves. It was a fast growing Tulip Poplar. I had my picture taken with my tree in 1963, and it was already twice my height. 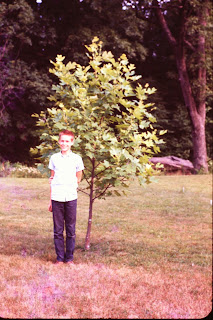 The future seemed unlimited for both of us. I went back to my tree many times. Tulip Poplars live hard and die young. This one blew over in a storm in April 2016, and that was the end of it. There's a lesson in that. When I was a kid I and my tree were full of vigor and naïve enthusiasm. Today I can think back and marvel at the positives and the negatives, how much we both grew, the scars and storms we have both confronted. 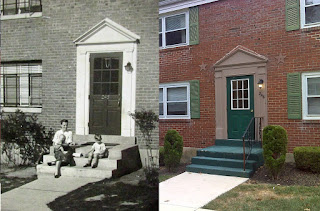 In the left photo that's me on the right with Mom and my baby brother Jim. The view at right was taken September 17, 2016.

This is the first place I really remember living. Here I learned how to swing on a swing and I found my first four-leaf clover. Today the swing is gone. The whole playground is a parking lot. But even if the swing was still there and I could sit in it and pretend ... even if I sat down in the lawn and started searching the clover ... I wouldn't be trying to go back to capture some lost essence of my youth.

When I visited the remnants of my tree in the Pennsylvania meadow in August 2016, I did not come to lament the ravages of age. No, in both places I came to reinforce the fabric of the tapestry I began to weave back then. I stand and nod and say "Yes, it happened right here. Now I see. This is how it goes because this is how real things go. The little boy built strength here. And he is still building it."

Then I smile and walk on, because there are many other stepping stones with deep personal significance that I want to visit.

Sure as hell beats a treadmill.