It was four days on the road, with three miles of trail around a little lake at John Muir Memorial County Park and a couple more miles of trail along Chaffee Creek where the noise of I-90 dominated the first mile.


This area is not an ideal setting for a foot traveler.  It is the most trail-poor section of the Ice Age Trail; but the routing has a purpose. It sets the hiker up for the best stuff along the trail, at Devil's Lake State Park.  Watch for that report soon.

But today's report is about open country, Amish farm country.

I came upon a typical Amish family fishing at French Creek Dam, and there were a whole gang of Amish men fishing at the fishing pier at John Muir County Park. Took no photos except of their buggies parked at the parking area. 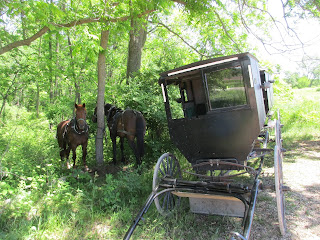 Amish people resent being photographed. Its based on their belief in the second of the Ten Commandments, which bans all 'graven images.' They have a point. By making an inanimate image of a person, thing, or even an idea (writing something down) you are idolizing them, and idolatry leads to error in thinking and behavior (sin) - separation from what's right and real and true.  One must stay intent on worshiping the "Living God".

What the Amish, and almost everybody else seem unable or unwilling to accept is that the Bible itself is a graven image, as is the original stone tablet containing the Ten Commandments themselves. This is one of the great beautiful Paradoxes that lie at the heart of what makes our reality such an interesting place. The word of [God], the nature of reality, is a living thing, not subject to being frozen in time, just as the Amish 'Ordnung' is - their always unwritten code of rules and ethics for proper living. It changes with the flow of events. It lives and breathes.

The advent of the written word marked the onset of the downfall of human culture. As soon as a person sets down footprints, they begin to fade. Their trail is lost unless others follow, and personally sustain it. Each traveler's footprints are their own, unique, personal, and not reproducible. Its such an obvious truth, and yet our tech-dependent culture is wholly dependent on denying this principle. This is a subject very close to my heart and at the core of my belief system. And so I'm taking the liberty of imposing it on you in this paradoxical written form. Better to talk to me about it some time.

Anyhow ... back to the subject at hand. Road walking is not all bad. In Fox Creek Preserve I met a most interesting fellow road walker. 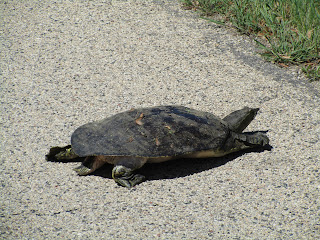 Neighbors along the roads often feel inspired to entertain passers-by. 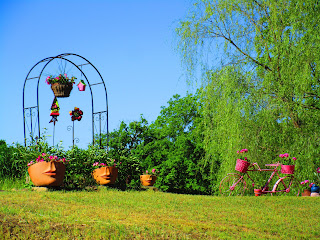 If you're going to have to pass people's private property, this is the kind I prefer.

The road I chose went across Buffalo Lake on a long causeway.  It's one of those lakes that is miles long and just a few feet deep.  They have a big problem with aquatic vegetation (clogging boat propellers), though the geese would not agree that it's a problem at all. 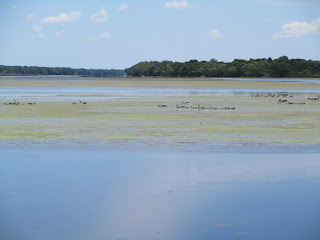 So here are the GPS Tracks for these four days on the road. 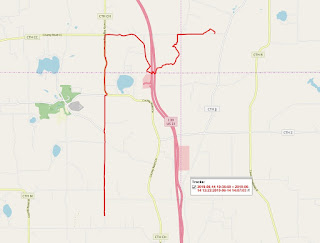 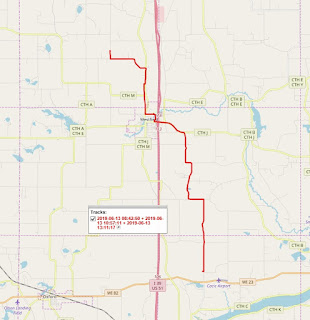 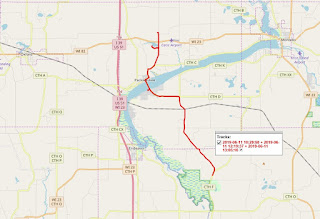 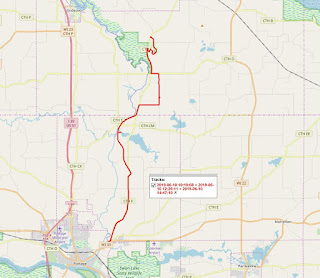 So now, with luck, it's on to 'greener pastures.'