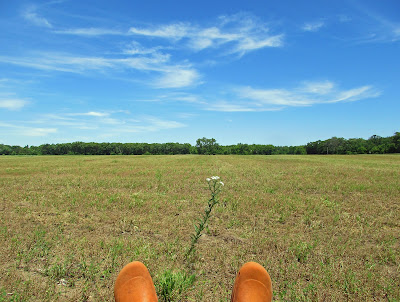 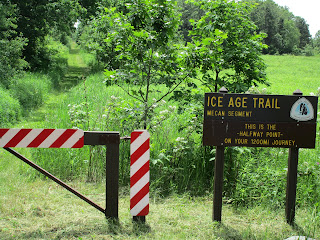 It's dead smack in the middle of lots of open prairie, just a few miles from the most wide-open mile of hiking I've encountered yet. 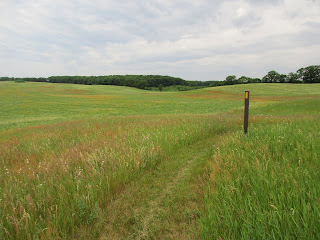 No trees, no shrubby bushes or brambles, just grass and wild flowers.  Practically the whole mile is visible in that shot above - it's the ribbon of slightly more colorful grass that rambles off to the left and then again to the right as it approaches the distant tree line.

This was part of the Mecan River segment, which also featured some nice riverside walking. 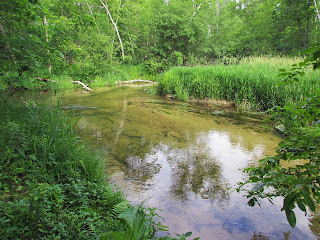 Mecan Springs was on the trail menu here too.  Its the headwaters of the river, in what's called a Glacial Tunnel valley.  But the trail just skirted the steep rim of that valley, never immersing the hiker in the wonder of this unusual setting.  Barely a glimpse of the headwater lakes, because the valley walls were wooded, and no views of any actual springs.  Pretty disappointing compared to what some creative trail building might have provided.

Farther north, in the "Deerfield Segment" I saw … well … just what you'd expect. 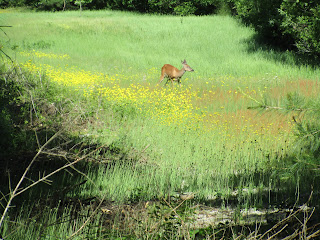 Wild flowers and prairie meadows were the most common sights. 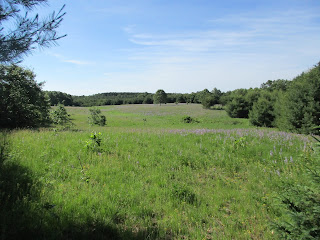 They don't always make for the most photogenic subjects, unless they are as stark as the headline photo, where the hay had just been harvested and somehow that lone stalk of Queen Anne's Lace 'fell through the cracks'.  So instead of broad vistas, I focused on the little things, like fairy rings in clover. 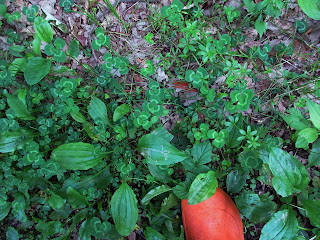 Or Lichens on an old weathered bench, on tree bark, and on glacier erratic rock. 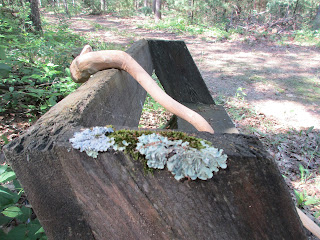 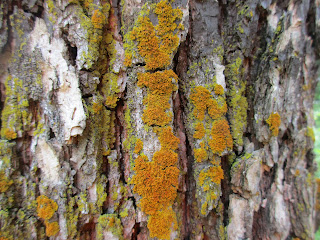 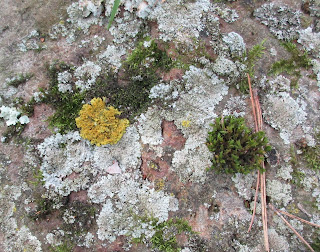 Or these ridiculously red sprouts of an oak, of the species known as 'red oak'. 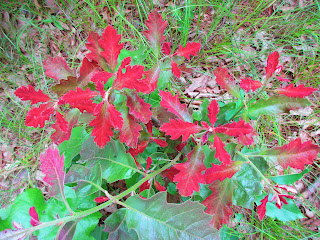 Hmmm.  Maybe names make sense more often than I give them credit for.  But this was an extreme - brighter than most flowers.

Anyhow, one feature of the hike that didn't fit the pattern was a wade through Bohn Lake. 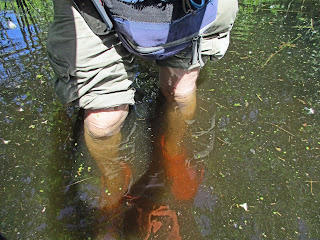 Water levels had covered what was apparently normally dry trail. 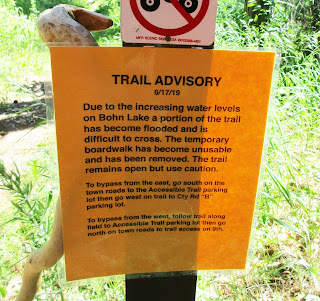 The water got even deeper than the photo.  Thigh deep.  Couldn't take that photo.  Modesty, you know.  After all, it was just a couple days past 'Hike Naked Day'.  Nice summer-mild water.  It was a refreshing change from prairie meadows in the bright sun.

Here are the GPS Tracks of these two hiking days. 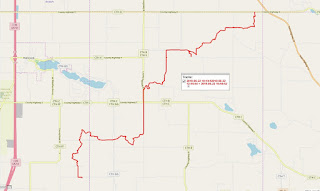 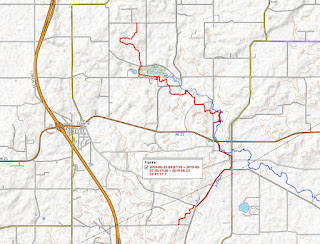 The majority was on real trail, with just a few short road walks.  Not so in the upcoming report.  Next I had to negotiate 30 miles of continuous road walking, a short segment of trail, just three miles, then 12.5 more miles on the road.

Prairie makes for good private farm land, and not for good public preserves.  Ahh, well.  I better get used to it.  I've got a thousand more miles of it on this trek to Colorado.