Colorado or Bust, Day One. Back to Wisconsin


I call it my 'Personal Continuous Footpath', an uninterrupted trail of footprints that connect every place I've ever lived.  I've been working on this since 2011 and have successfully connected Key West Florida, Topsail Island North Carolina, Wilmington, Delaware, State College PA, and with the Appalachian Trail all the way to Katahdin, Maine thrown in.  When I left off this project in Fall, 2017, I was hiking south through Wisconsin, heading to the home where I learned to walk, in Sauk City, near the state capitol of Madison.

I was chased off the trail by winter as I hiked east out of Wausau, Wisconsin.  At the time I had planned a detour via the Mountain-Bay rail trail and a cobbled-together route through Green Bay to the eastern terminus of the Ice Age Trail, but have changed my mind and now intend to continue to stick with the Ice Age Trail from where I left off then, and hike south (trail east).  This is a shorter route and allows me (and the Fifty Trail route that I'm hereby establishing) to include the Devil's Lake section of the Ice Age Trail, which is commonly considered to be the best segment of the entire trail.

The ultimate goal is to visit the last two places where I lived--Sauk City, Wisconsin (with a visit to the hospital where I was born in Madison) and then to Colorado where I did graduate school.

I have two very different trail options for how I could get to Colorado--either via the North Country Trail, or via a newly established Great American Rail Trail, the route of which was just revealed last month (May 2019).  That route has a few small to moderate-length road-walk gaps, but it takes me across Iowa and Nebraska.  The North Country Trail crosses northern Minnesota and North Dakota where it leaves me hanging with some huge gaps and lots of road walking to get south to Colorado.  Since that is the route of the Fifty Trail, I consider it to be a project for later.  First I want to give full attention to finishing 'Hiking Home,' a project that I've been working on for nearly 8 years now.

So … for this first report, there isn't a lot of hiking to cover.  It's mostly just a written re-introduction.  The eastbound Ice Age Trail leaves the Mountain-Bay Trail and follows a specified but unmarked road walk for 28.5 miles between the Ringle Segment at Hatley and the New Hope-Iola Ski Hill segment.

Road walks on the Ice Age Trail are unofficial.  There are no yellow blazes.  You're on your own.  And so I've chosen to take some different roads.  Instead of leaving the Mountain-Bay Trail at Hatley, I'm including the section east to Eland where there's a nice museum display and trailhead (shown in the report from fall 2017 and again as the headline photo above.

From there I headed south to Wilson Lake County Park. 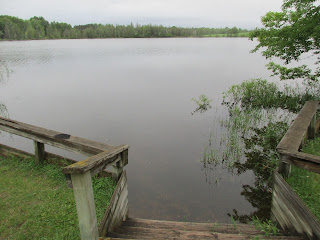 It was a cloudy drizzly day.  Back in Topsail it had been summer for a month.  Here it was in the 50's and breezy and felt like early spring, although corn has been planted and is sprouting, the Monarch Butterflies have arrived in full force, and the Sand Hill Cranes have nested and hatched their little ones (see future reports).

From Wilson Lake I headed to the village of Elderon (love that name, it evokes a Tolkienesque feel) where there's another lakeside park, and then on to end the day at the Community Center in the village of Galloway where the sky was finally beginning to clear and the local potato barons have erected a patriotic memorial to one of their own. 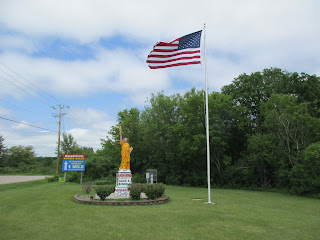 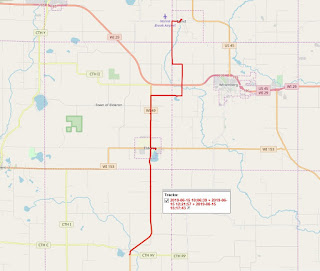 And for an overview of my long-suffering Personal Continuous Footpath route, follow this link for a full map.  (Be patient, it contains almost 2000 individual hikes, so can take a few seconds to load).

So it's "Colorado or Bust."  Watch this space for the continuing reports.