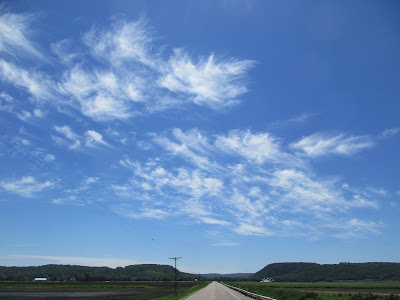 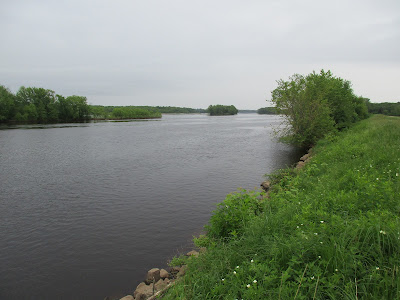 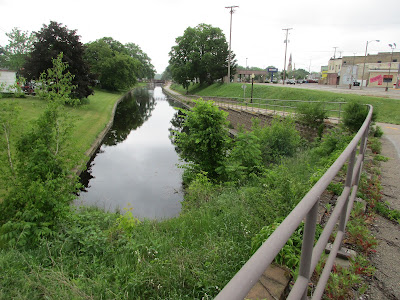 Colorado or Bust, Days 13 and 14 found me traversing the Lower Narrows of the Baraboo River, a steep-walled gap cut in the hills eons ago (first photo above), the Pine Island State Wildlife Area, along the sprawling Wisconsin River (second photo) and finally the historic Portage Canal, third photo, which connects the Wisconsin River as it flows to the Mississippi and the Gulf of Mexico with the Fox River, which flows into Lake Michigan and on to the Atlantic.

This report doesn't have many more photos.  It's more about the deep history and some unexpected personal history.  To go with the three rivers, I discuss three bits of history.

First the Lower Narrows.  According to this interpretive sign, 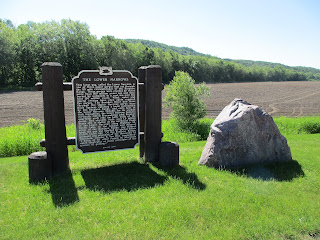 the Narrows were cut 500 million years ago through 1.5 billion year old rock.  Devil's Lake is mentioned as another cut through that ancient rock of the Baraboo Range.  I get up close and personal with its steep cut rock faces in my next report.

Second, in much more recent history, the First Peoples of America maintained a trail between the Wisconsin River and the Fox River as a major commerce route well before the Europeans arrived.  Europeans established Fort Winnebago there to secure the area because of its economic importance, then set about to eliminate the portage (carrying one's boat overland) between the rivers by digging the canal.  The town of Portage is built around this historically important pre-industrial thorofare.

Finally, as the third historic note, in the Early 20th Century, famous pioneering conservationist Aldo Leopold bought land in the area of Pine Island and began practicing and refining his revolutionary conservation principles, known as the 'Land Ethic.'

As I hiked through the area, I found the Leopold Center to be a convenient rest stop. 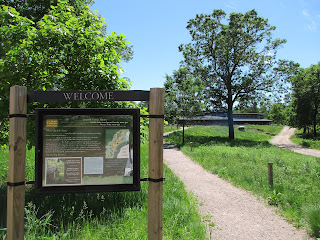 I had not known it was there, and knew nothing of its significance.  The Aldo Leopold foundation was established in 1982.  They built this building from wood locally harvested off his former property.  It is set near 'the shack' where Leopold and his family often came to work on restoring the land and to just relax and vacation; and it is located near the spot where Leopold tragically died in April 1948 fighting a wildfire.

I visited the 'green building' that houses the Leopold Center, and mentioned to the friendly staff that I was a distant relative of Leopold through the marriage of a second cousin of mine to Leopold's grand-daughter Wendy Leopold.

Amazingly, the staff produced a Leopold Family Tree, made a copy for me, and shared my excitement as I showed them where I fit in that tree. 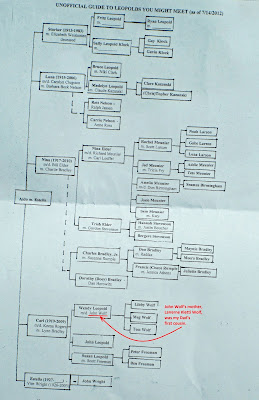 The visit has renewed my appreciation for the great man, who studied Forestry in college then went on to realize the true value of the Forest, not merely as a resource to be plundered but as a sustaining, nurturing cradle for wildlife - a place to be respected and husbanded.

Here are the GPS Tracks for these two days. 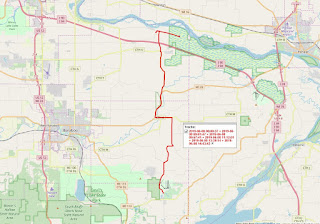 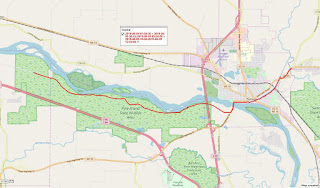 In the next report, I'm hiking real trail again, in fact it is by consensus the signature bit of trail of all the 1200 miles of the Ice Age National Scenic trail.
Posted by PJ Wetzel at 12:08 AM