From Bitter End to sweet beginning

Three miles south of the town or Roan Mountain, Tennessee, and just past Cloudland Elementary School is Buck Mountain Road. Turn left and drive two miles, turn left again at Old Buck Mountain Road, then right after 0.8 miles. This is Howard Harrison Lane, and at its end is a small cluster of homes and a gated Forest Service road. This is the place known as Bitter End. This was the launch point for today's (Valentines Day 2012) out-n-back day hike, number 42 in the series that began January 1st.

At the other end of today's relatively short effort was the southbound hiker's first contact with North Carolina - a sweet beginning to some real mountain hiking.

In between is the cascade called Mountaineer Falls, which is just below the shelter of the same name. 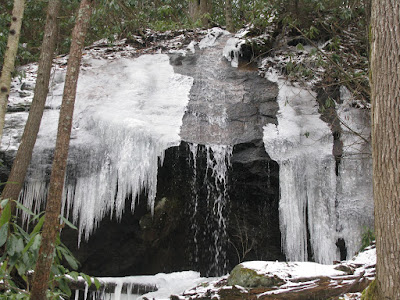 But let's begin at the End.

Gated USFS 293 heads into the woods from Bitter End and goes barely 0.2 miles before intersecting the AT. From there, the southbound hiker travels a half mile more through the 'badlands' I identified yesterday (much more of it northbound from here). I call it 'badlands' because on the smallest scale the landscape looks as if it has been bombed - little humps and depressions are continuous, and the trail winds willy-nilly left and right to avoid them. Most of the time you are in deep Rhododendron cover, so all sense of scale and direction are missing. It makes a half mile of hiking seem like ten miles (in the humble opinion of someone who likes to grasp the bigger picture of his surroundings as he passes through). 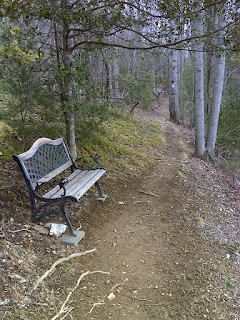 But then you begin a serious descent to Laurel Fork. You follow the stream, bathed in the lovely noise of rushing water, for perhaps a quarter mile, cross the footbridge, and then ascend through a bit more badlands until you reach the Ron Frey memorial bench with a glorious man-made view of Hump Mountain and over to the Roan Mountain complex (out of view to the right in this shot): 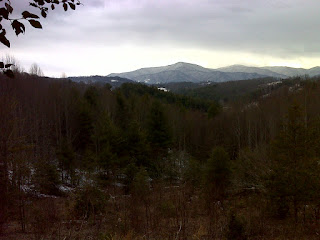 After another mile, in which you descend and cross some streams then regain all that altitude, you reach Walnut Mountain Road - unimproved, but rather well-used. Today drivers were still using chains, three days after the last snowfall. Immediately south of the road crossing, the trail descends seriously, then levels off until it reaches the beautiful new Mountaineer Falls Shelter - a three-level affair built in 2006, and such a stark contrast to the dilapidated Moreland Gap Shelter I showed you yesterday. Amazingly, I arrived at the shelter just as a semi-serious rain shower passed through - so I stayed dry. The rain lasted 15 minutes, then I was off to view the falls and descend to the beautiful, serene Elk River, a walk through an open meadow on the flood plain, and the first contact with North Carolina: 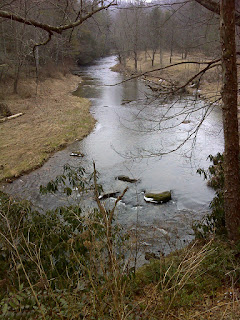 To sum up, it was a well-rounded day from End to beginning and, of course, back again - coming full-circle as all well-rounded things should do. 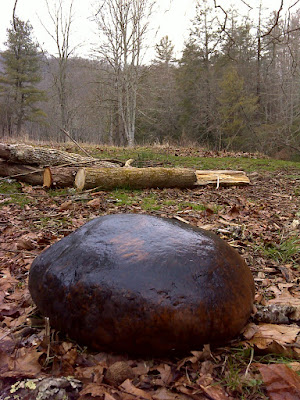 Here's the GPS track of today's hike. Click on the title for more photos and additional GPS information, including a plot of the elevation profile and travel speed.

AT Day 42 - Bitter End to Elk River
EveryTrail - Find trail maps for California and beyond
Posted by PJ Wetzel at 9:30 PM