A new touch of winter, but a sure sign of spring 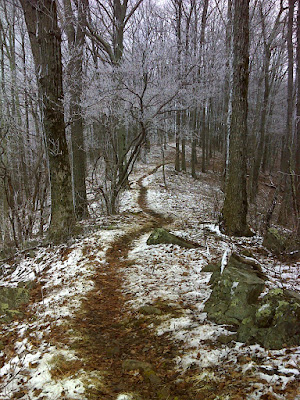 Snow gave me a return visit today, Day 36 (February 8th). It had been an entire month since the last snow - what a wimp of a winter, not that I'm complaining.

I hiked two out-and-back legs today, and on the first, ten miles long, I not only forgot my backpack (it's so comfortable and light that I was half a mile down the trail before I realized it, so decided to go without), but I also made a wrong choice in clothing. I wore my super-light down jacket as the outer layer. What I didn't figure on was that the snow was a very wet snow and for some reason it clung to the jacket and made it soggy. My trusty pants, which sop up rain like a sponge (but still keep me warm) were repelling this wet snow completely. I really can't explain the difference - the lesson is that sometimes the only way to know how your gear will perform is to let it fail.

This leg north took me along the crest of Holston Mountain from US 421 back to Abingdon Gap Shelter. I passed a tent on the way out, and passed its owner on the way back - and here's the sure sign of spring: It was my first NoBo! My first meeting of a NorthBound thru-hiker. Mickey D left Springer January 2nd and had not taken a zero day yet. He planned to take two in Damascus. Mickey D is a trail veteran - he's done a SoBo thru-hike and various other trails. It was exciting to meet him - the first of what will surely be hundreds.

I made gear adjustments, changed into dry shoes and socks (and did not forget my backpack) for the leg south of highway 421, so was much more comfortable. By then the snow had let up and a dense fog had rolled in (producing the rime ice you see in the photo up top).

And then came my second encounter with a serious hiker on this unlikeliest of days. 'Winter Hiker' was headed to Double Springs Shelter for the night, which I had just passed. He didn’t specify how long he’d been hiking or where he’d get to in the end, but that didn’t matter to him. He has a job lined up starting in April where he lives in Vermont, and he just loves hiking. I think he said he’d done the entire trail already.

Most interesting about him was that he was ‘wearing’ an umbrella. It was propped up by one strap of his backpack somehow, and seemed very secure. 'Winter Hiker' is no weirdo. He's an articulate communicator and seemed otherwise very well geared (better than me), with gaiters, high-end boots, water-proof pants and jacket, nice trekking poles, etc.

I have, in fact, hiked carrying an umbrella in the past. It's an elegant solution to the problem of staying dry. It keeps the rain off your torso, yet you are fully ventilated. My umbrella was full-sized, so it brushed against foliage occasionally, and it tied up one hand. W-H had solved both problems - his umbrella was smaller than a regular street umbrella. I wish I had asked him more about it.

This southbound leg completed my traverse of the ridge of Holston Mountain. The fog even let up enough to let me see the huge South Holston Lake through the trees to the west and a glimpse or two of the entirely inappropriately named Shady Valley to the east. (There are very few trees and it's a wide, high, exposed valley - still, a very pleasant looking place by any name).

Most of the other photos I took today were various snow shots, but I'll leave you with this parting shot: It's just called the 'Emergency Shelter' between McQueen Gap and the former fire tower on McQueen Knob. It looks pretty drafty, and the guide book said it had a dirt floor. But it has a new metal roof and now sports a cozy little raised platform, big enough to squeeze in two people - if they're really friendly. 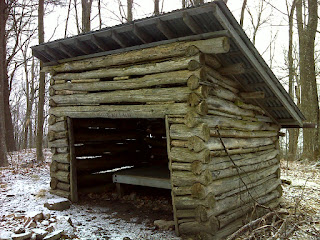 Here's the map of today's route. Click the title for more detailed GPS information and a bunch of additional photos:

AT Day 36 - Holston Mtn, southern half
EveryTrail - Find the best hikes in California and beyond
Posted by PJ Wetzel at 7:16 PM