Spotlight on the trail builders 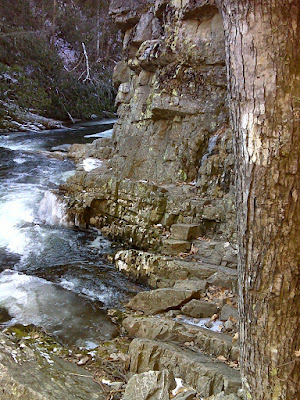 This is the route of the Appalachian Trail just below Laurel Fork Falls. It's a ledge traversing bedrock barely above water level. It took some concrete work to make this a piece of 'trail'.

But it is worth the effort. This is a popular place for day hikers intent on seeing the impressive cascade, and it was included in my itinerary for today, Day 40, Sunday, February 12: 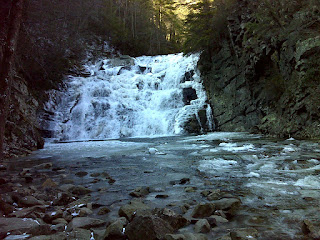 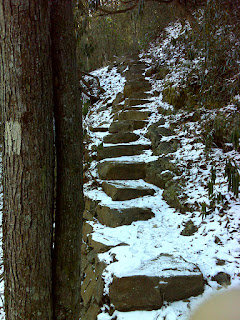 Most day hikers stop here, but of course the AT goes on. It ascends several hundred feet via 265 stone steps up to the "high water bypass trail" - you saw why such a trail might be necessary. 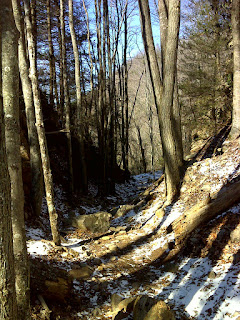 The High Water Trail and then the AT itself from there to Dennis Cove Road follows a course cut by a much older 'trail builder' - an ambitions railroad line that chose to run its tracks through this gorge. There were several long, high trestles across the stream, long gone, and deep narrow cuts like this through solid bedrock. Here the AT borrows its route from these 19th century trail builders.

The other section of trail I covered today rose 2000 feet from the Laurel Fork to Pond Flats. Yesterday I hiked the north side of this mountain and found the trail to be one of the most user friendly climbs I've encountered -- very smoothly graded with switchbacks and a steady but comfortable rate of ascent. Today, on the south side of the same mountain it was a different story.

Some sections here the trail power straight up a ridge with a "CRASH! POW! WHAM!, straight up the hill and the slope be damned" attitude, replete with erosion right down to bedrock, and places where you needed to grab the resident shrubbery to keep from toppling over. 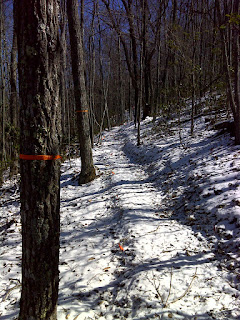 These sections of trail I would call ‘cardiac climbs’ and, going the other way, ‘suicide slides’, the latter was particularly true today with an inch of snow on the trail. After reaching my turn-around point on this leg I negotiated those ‘suicide slides’ carefully and still slipped a few times. And then I began to notice a couple sections of future relocation flagged with red or orange plastic and wire flags. It became clear that the trail on this side of the mountain was a work in progress. There were already sections of the CRASH BANG trail that had been abandoned and replaced by nice switchbacks, and I documented at least two new relocations not yet officially part of the trail. The one shown here seems nearly finished - the grading and all tell-tale marking stopped just out of sight of the old 'Blast up the hill' trail that I was forced to follow.

Soon the hiker who chooses to go over Pond Mountain will have a pleasant experience all the way up and down both sides - no more heart-pounding cardiac ascents and heart-in-throat suicide descents thanks to the current trail builders, be they the local club (Tennessee Eastman), the 'Hardcore Crew', the Konnarock crews or others.

My hat's off to the trail builders, past and present, for your hard work!

Here's the GPS track of my route today, including the variations I took on the side trail to the trailhead parking. Click the title for further information and to view all the photos:

AT Day 40 - Laurel Fork Falls at EveryTrail
EveryTrail - Find the best hikes in California and beyond
Posted by PJ Wetzel at 11:12 PM