The Appalachian Trail crosses many 'Balds' - enigmatic treeless peaks that research suggests are tundra remnants from the last ice age that were ecologically 'enforced' (originally by extinct mega-fauna and then by native American burning). These are areas that are mostly grassy and open despite being warm and wet enough to support lush forest. And today (Friday, February 17th) I hiked the longest stretch of grassy bald in the Appalachian Range. The weather began with biting wind-driven arctic fog but transformed to crystal clear with unlimited visibility by midday. What an honor!

I parked at the USFS paved, privy-equipped parking area at Carver's Gap and hiked north to meet my footsteps from yesterday (in wind and rain) atop Hump Mountain, and then back to the starting point, as usual. It was a long but thoroughly enjoyable twenty miles.

The first bald you cross on this route is Round Bald. The trail over this summit has been constructed to prevent erosion of the sensitive grassland soil. They used landscape fabric covered with gravel, and the footing is excellent. Unfortunately when this section ends after about a mile, you immediately see the contrast: The rutted, deeply eroded alternately rocky and muddy ascent up Jane Bald is as tough as Round Bald is easy.

Beyond Jane Bald, which is rather a small knob relative to the other balds, the trail climbs toward Grassy Ridge. It passes a side trail to the summit of this bald rather than leading you to the summit itself (site of the highest formerly-tilled farm east of the Rockies). From there you begin a wooded section that descends to two shelters and two gaps. This section of trail has relocations with switch-backs that replace 'brain-dead bulldoze-ahead, straight-up-the-slope' sections of former trail that are steep and deeply eroded. Then you follow an old road grade that parallels the Tennessee-North Carolina border and ascends toward the long stretch of bald that includes Little Hump Mountain, Bradley Gap and Hump Mountain itself - miles of glorious open meadow and a true climax to today's experience.

Okay, now that I've used less than a thousand words to summarize the route, I'll let the pictures tell the story in more detail. First comes the precious, ephemeral early morning fog-shrouded vistas from Round Bald, frosted by rime ice: 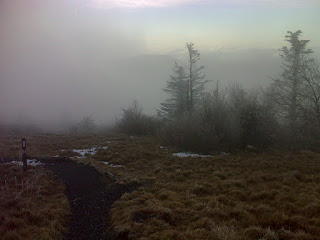 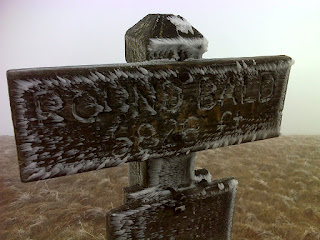 Moving across to Little Hump Mountain, the rime ice persisted until the sun got to work. Here's the view back toward the SW to Grassy Ridge, the summit in the distance: 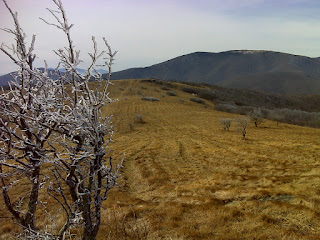 And facing the other direction from the summit of Little Hump Mountain, the expansive balds take charge. Here is the view that stretches across Bradley Gap to the long ridge that is Hump Mountain: 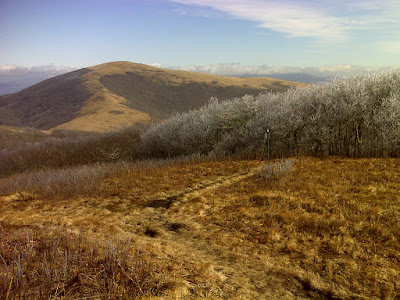 At the turn-around point of today's section, I got to see the views that I missed yesterday from the Stan Murray memorial: 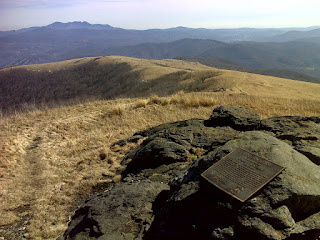 And on the way back, with the fog on Round Bald long-ago dissipated, I could soak up the 'big picture'. Here's Jane Bald with Round Bald behind it (and Roan Mountain proper in the background), as viewed from the southern flanks of Grassy Ridge: 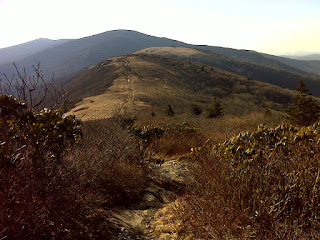 Today's hike breaks the record for the number of photos taken and judged to be worthwhile in my usual evening debriefing. For a look at the entire album, click below. Here's the map of the track of today's hike, as recorded by my GPS. And embedded in this track are all the photos, 'geo-located' automatically by my GPS. Each little red 'pin' along the track marks the location of a photo.

AT Day 45 - the Roan High Balds at EveryTrail
EveryTrail - Find the best Hiking in North Carolina
Posted by PJ Wetzel at 1:02 AM