A final brush with Brushy Mountain 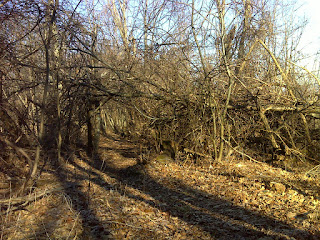 What's the deal with Brushy Mountain? It's like a bad dream. I thought I was done with it. But it seems Virginia has somewhere upwards of 8 different Brushy Mountains. And today's candidate (January 30th), judging from the photo above, may have the strongest case to deserve the name. Yes, that's the AT wallowing through that tangle.

Actually most of today's hike was through much prettier terrain. It covered 20.8 miles and traversed this incarnation of Brushy Mountain from end to end. 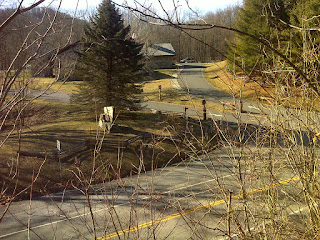 In the middle is the beautiful Mount Rogers Visitor Center (here seen from across VA 16 as the southbound AT approaches it). That's where I started and finished the day. I headed out on the trail early, at 7:10, eager to get back into the routine after three zero days. It was a crisp morning because of the low humidity. The temperature was around freezing and the wind was light but occasionally an issue on the ridge. I hiked north along the spine of Brushy Mountain with some brief rocky passages for a couple of miles and then descended to a very high narrow saddle that almost felt like a bridge between Brushy Mountain and Locust Mountain. It dropped off steeply to headwaters of streams on both sides.

The climb up Locust mountain was strenuous but brief. That's where I had ended my previous day-hike, thus it was where I turned around today. The return climb up Brushy Mountain was much less strenuous – less steep and somewhat less elevation gain. On the way back to the Visitor Center I passed three people in succession, not together but two of them turned out to be hiking together – a woman who seemed to be semi-running was first, then came two men, one who seemed older than me wearing shorts and a thin shirt (hiking vigorously to keep warm - trail name Short Stop) and a slightly younger man trailing behind who asked about water up ahead. I told him there was none until the fantastic spring that feeds Vaught Branch on the north side of Glade Mountain.

I stopped in at the Mt. Rogers Visitor center to ask about snow on the mountain (got the expected answer – none, and that was very unusual for this time of year) and used their rest room then headed out past the very nearby and very nice Partnership Shelter and on along a woods road for a mile or more. The road followed a stream, gradually descending, then ascended for a bit before the trail left it to make its way to a power line crossing with very limited views of neighboring ridges but none of the valleys. 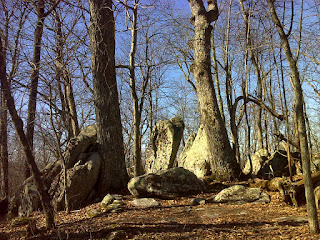 From there the AT climbs to the ridge of Brushy Mountain at a knob with interesting big monoliths and big oaks but no view. Then there are half a dozen knobs without rocks that the trail tops, each climb and descent is less than 100 feet. At the last of these, south of the crossing of the dirt road VA 610, people have cut down trees to create a limited view of the Rye Valley to the south. 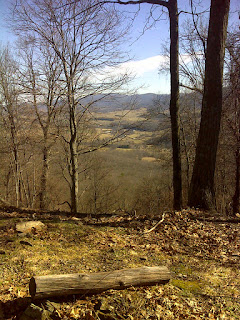 This is where I had intended to turn around for the day, but it was only 1PM – today’s hike had so little large-scale elevation change, and the walkway was so smooth, that I was going fast. I didn’t want to turn around until 2PM so I continued on, surprised to make it all the way to the crossing of the paved Teas Road, VA 670 at the South Fork of the Holston River where there is a road along the river and an AT footbridge crossing it. 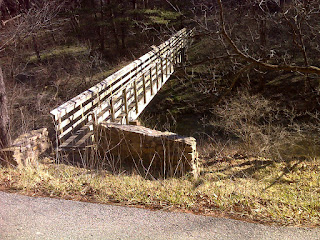 I had time to take photos and still was headed back well within schedule, at 2:05PM. I always seem to go a bit faster on the way back, so despite the fact that I had to climb 800 feet back up from the Holston River, I got back to the visitor center as the low angle sunlight played through a pretty stretch of 'green tunnel' along the woods road - it felt great to be back 'home'. 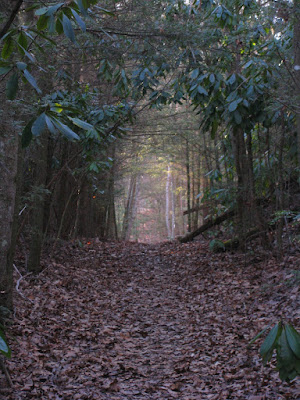 Below is the detailed GPS track with a link to a whole slew of photos for the January 30th hike:

AT Day 27 - Brushy Mountain at EveryTrail
EveryTrail - Find the best Hiking in Virginia
Posted by PJ Wetzel at 7:30 PM