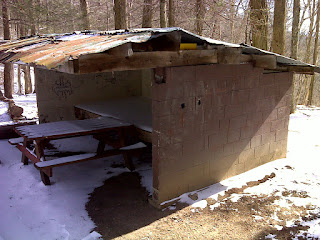 Moreland Gap Shelter was sheltering nothing but 3 inches of snow. Look at that roof. It looks like a third world mule stall. Wouldn't want to have to take refuge there in a storm ... just sayin' ...

Somehow, the highlight of today's long hike (Monday February 13th) was gazing wistfully across 9 miles of crystal air to 5700 foot Hump Mountain, still 25 trail miles away, and wishing I was there. Just sayin' ...

Not that today's 19 mile trek was dull. Far from it. But it was arduous, both mentally and physically. It began at the trailhead on Dennis Cove Road, which rejected me yesterday because of icy road conditions, reminding me of the true weakest link in my method of hiking the AT - the need for frequent road access.

From there the southbound trail ascends to White Rock Mountain -- 1600 feet of climbing, sometimes on trail with slippery roots and leaves buried by the lingering snow, which was 3 inches deep with drifts over the trail piling up to nearly a foot in places -- pretty tough slogging through.

And there was a section of old-style trail that just bulldozes up the slope: 'Cardiac climb' / 'Suicide Slide' depending which way you're going. It really was a 'Suicide Slide' for me on the way back down in the late afternoon, with the snow made slippery by the warm sun. Flag tape clearly indicated that a reroute is in the planning around this old eroded "power straight up the ridge and to hell with erosion control and hikers' knees" section. Great, but too late for me!! 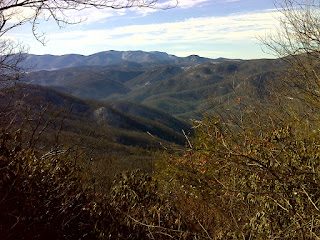 White Rock Mountain offered some nice views of really wild country, like this view to the southwest. It is the first mountain I've crossed on this trek where the main bedrock is granite (my amateur identification). 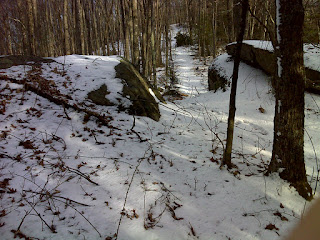 The AT neatly passes through an introductory portal of two large boulders near the summit. But the rocks are not white. Just sayin' ... 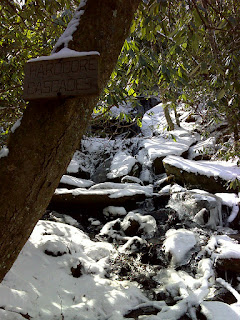 Leaving White Rock Mountain the trail enters a 'badlands' (just sayin ... ) - bombed-out looking forest that's wedged between private high pasture and farm land and the headwaters of Laurel Fork, bound for Dennis Cove and then on down to its impressive Cascade (see yesterday's entry). Here the trail meanders left and right and up and down through the jumble of rough terrain, never seeming to 'settle' into a pattern. It crosses small streams and one larger one at a well-hidden falls that has been proclaimed as 'Hardcore Cascades' according to the sign. My guess is that it was named that because it's so remote that only the most hardcore hikers would have the fortitude and perseverance to reach it ... just sayin'.

A long day alone on the trail ended at dusk with a much smaller than usual harvest of photos. That tells me something. ... Just sayin'.

Here's the route as recorded by my GPS. Click the title for more photos and for more detailed GPS information.

AT Day 41 - White Rock Mountain at EveryTrail
EveryTrail - Find the best hikes in California and beyond
Posted by PJ Wetzel at 8:18 PM