Side trip to the best Party place in Ohio 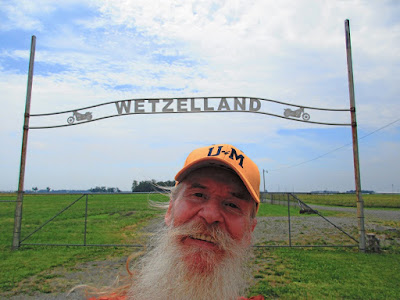 It covers a frikkin' half square mile.  It's the site of the most awesome motorcycle rally in Ohio - maybe the state's best party, period.  And it's all named after me.

Well, sort of.  Like if your name is Smith (or Wesson) they named a handgun after you.

Truth be told, the Wetzel Motorcycle Club named their party place after the little hamlet of Wetzel, Ohio, a few miles down the road at the intersection of Wetzel Road and Middlepoint-Wetzel Road. 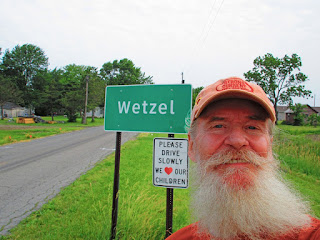 It had been more than 40 years since I last visited Wetzel, Ohio.  On my last visit there were no signs announcing the town, nothing except the road signs at the intersection. 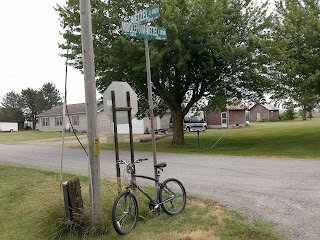 On my last visit, Wetzel Motorcycle Club had not yet been founded and Wetzelland was just another field of corn and soybeans.  But it's come a long way.  The first rally was a small get-together in 1987, and it's been growing ever since.  These days they throw one helluva party on the last weekend of July, attracting bikers from all across the country.  Check their Facebook Page for more.  They've built a big pond in the shape of the Harley-Davidson emblem.  They have big-name bands performing, and they donate a big chunk of their proceeds to local charity.  And in the process, they've put the sleepy little crossroads town of Wetzel back on the map.

Since the Buckeye Trail/North Country National Scenic Trail is only a few miles east of Wetzelland, it seemed a natural detour for me to take.  I headed northwest out of Delphos, past the loop-trail that circles their interesting man-made elevated reservoir 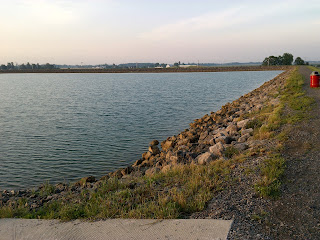 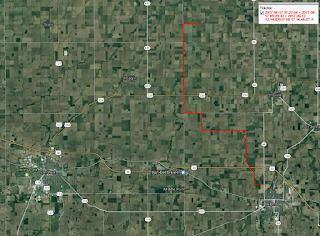 and on through some of the flattest farmland this side of Kansas. 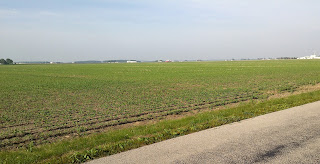 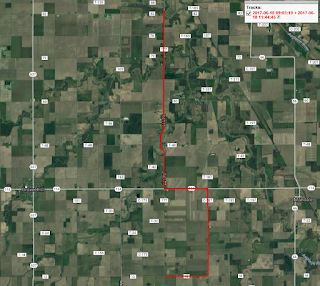 I headed on north through the town of Melrose and then picked up the Buckeye Trail again near the town of Charloe, beside the Little Auglaise River.


Starting with this post I'm going to feature the 'hat of the day'.  I have an ever-growing collection of them, and I've organized them into a rotation.  Wear a different one every day until I've cycled through them all.

This part of the Buckeye Trail/North Country Trail has a lot of road walking.  There are just a few brief walks in the woods alongside the Miami and Erie Canal ... 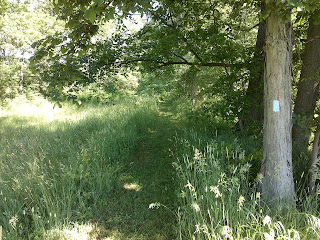 ... but a lot of the canal in this area has been destroyed.  Elsewhere it runs beside or through farm fields.  Here I took a detour to avoid some traffic congestion. 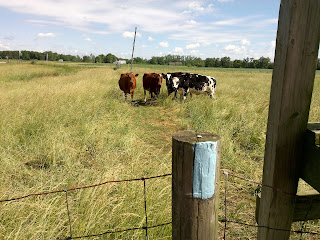 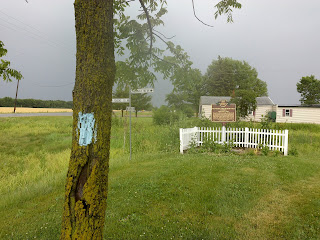 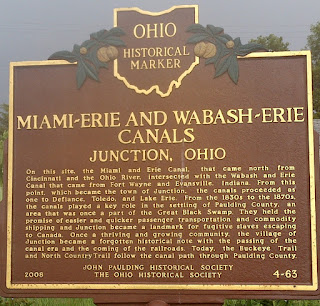 But north of there it was all road walk, first north, and then a right turn at Hammerhead Road to head eastward toward the town of Defiance. 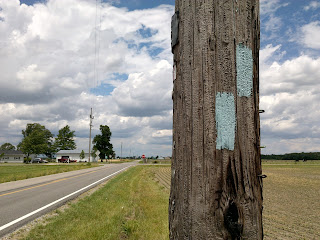 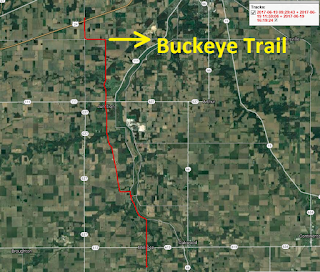 It is here that I've chosen to say my final farewell to the Buckeye Trail and turn left.   This will be the start of a major detour off the North Country Trail.  The North Country Trail and the Buckeye Trail coincide for some thirty more miles, heading eastward from the point shown in the photo above, passing through Defiance then following the Miami and Erie Canal where it exists from Independence through Napoleon. It is a street walk through downtown Defiance, then the trail uses 'narrow busy' roads to Independence that I'd also prefer to avoid.

After Napoleon the North Country Trail splits with the Buckeye Trail and jumps over to the Wabash Cannonball rail trail, picking up its SW extension at Liberty Center and continuing NE for ten more miles.  Following the rail trail route, the NCT then turns back westward near Toledo and heads back due west for more than thirty more miles, leaving the Wabash Cannonball at West Unity where it begins a 20 mile road walk North to Hillsdale, Michigan for a short off-road piece and a bit of rail trail before a sixty mile road walk that is a tour of the downtown areas of Jonesville, Litchfield, Homer, Albion, Marshall, and then sprawling Battle Creek.

I don't do city tours, certainly not when I have to walk roads to connect between them.  So I've chosen to cut north-northwestward from Defiance in order to visit rural NE Indiana and to avoid downtown Battle Creek before returning to the North Country Trail west of Battle Creek.

It will be a long road walk this way, too, but here I get to pick roads that match my sensibilities.  Here I won't have anybody else to blame if I get bored.

Maybe my hat rotation will keep you, my faithful readers, from too much boredom.  How many hats do I have to share with you?  Well, check out the two hats in the selfies up top.  They are hats number 84 and 85.  You won't see them again until fall.
Posted by PJ Wetzel at 1:58 PM