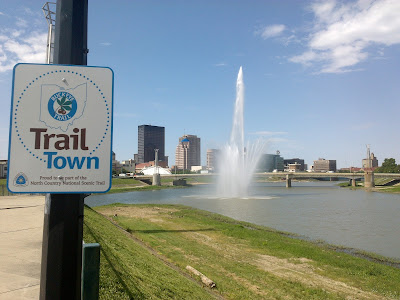 Called the GMRRT for short, it's the gem of the Miami River Trail System.  With scenes like the above, with the Dayton Skyline gleaming in the background, and many other fine river views, this is a paved bike path worth exploring. 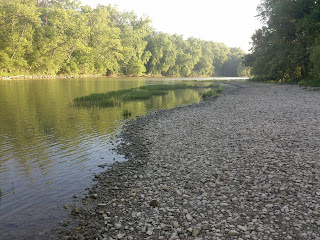 I took three days to cover it, from the confluence of the Mad River and the Miami River in Dayton, where the fountain above comes on for just 30 seconds every hour (yes, I was just plain lucky to be passing at the right moment) to "Road Side Park" on the north outskirts of the town of Piqua, this trail was a first class experience. 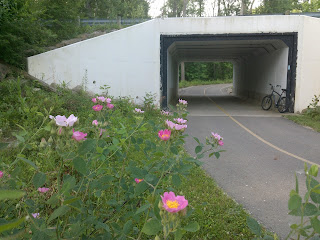 Before going on, I wanted to clear up any confusion about the name Miami here in Ohio and its connection with Miami, Florida.  Both places are named after Native American peoples, but they have no linguistic or cultural connection with one another (though perhaps they have common ancestors who crossed the land bridge from Asia back in the ice age).  An Ohio Miami Indian refers to himself as 'Myaamia.'  The plural is 'Myaamiaki', and they originally lived in SW Michigan, western Ohio, and Indiana.  The completely separate 'Mayaimi' people lived around what we call Lake Okeechobee in Florida.  But these people named themselves after their lake - Mayaimi means 'big water'.  The Miami River in Ohio is big water too.  But maybe I better stop here before I confuse my readers who still mi ami  (Italian for 'you love me.')

Anyhow ... The GMRRT and its namesake river pass plenty of interesting places.  There's even  a ghost town called Tadmore (not much to see) where a flood control dam rendered the town uninhabitable (that's the way they defined progress back in the early 20th century), and there's also the historic Eldean Covered Bridge, which unlike anything in Tadmore, is still standing and still in use. 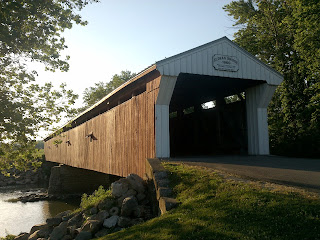 The trail passes through the city of Troy, with a promenade of trail-side park benches overlooking the river and the town beyond, 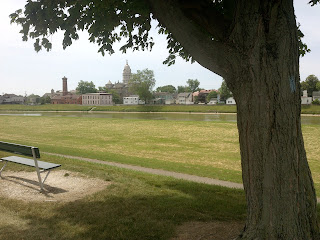 And it offers a wonderful route through Piqua that the Buckeye Trail/North Country Trail used to follow but no longer does.  Because I was walking one way and biking back, I got to experience both routes. 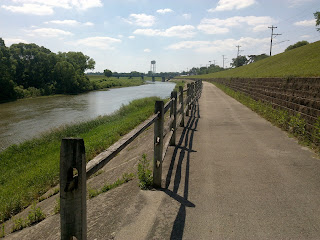 Instead of following the river through Piqua, the Buckeye Trail follows Linear Park in a promenade through center town, 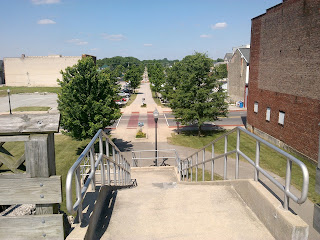 And then along what's called the River's Edge Trail that follows the Miami and Erie Canal, passing the biggest cemetery I've ever seen 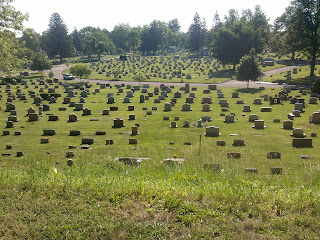 And passing three pretty lakes that helped provide the canal with its water in this area. 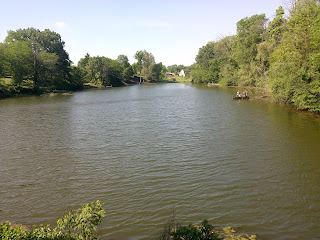 The Miami and Erie Canal runs from the Ohio River in Cincinnati to Lake Erie.  Parts of the GMRRM follow it, for example here, as it passes Lock 14 near Tipp City 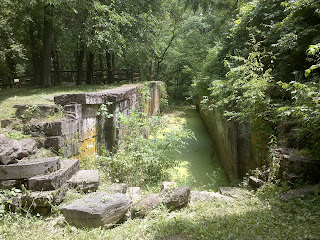 and it officially becomes the 'Miami and Erie Canal Trail' and the route of the Buckeye/North Country Trails from Piqua North, so you'll be hearing and seeing a lot more about that in posts to come. 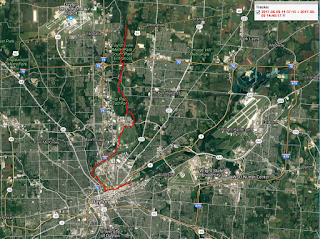 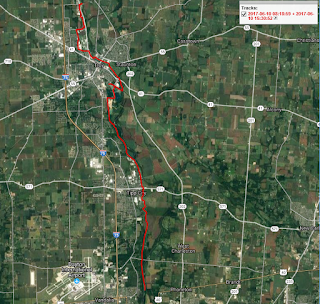 And as always, you can delve deeper with this interactive map of my track.  Just zoom in on the area of interest starting from this general map of my Personal Continuous Footpath meanderings: