Hiking the Miami and Erie Canal and the towns it built 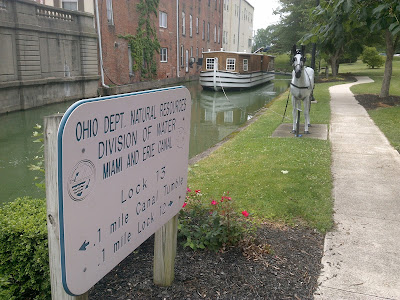 My last report covered two days of hiking the tow path of the Miami and Erie Canal, now converted into a trail, through the towns of Lockington (not named after Lockey Locking and his curly blond locks but for the five successive canal locks situated there), Newport, Fort Loramie, Minster, and New Bremen, all of which attribute their early development to the coming of the canal.

This report covers the canal route through St. Mary's, Spencerville, and Delphos.  Spencerville, in particular, acknowledges its canal roots. 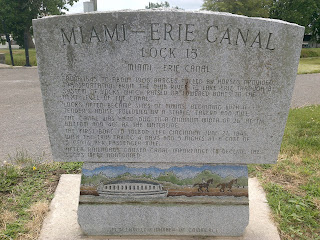 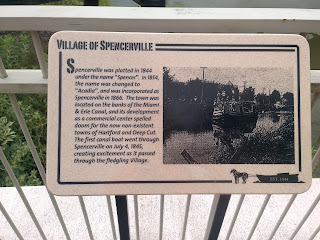 And Delphos features a canal museum (though it was closed when I came through).  But the town of St. Marys pays perhaps the most elaborate homage to its canal roots with the only life-sized reproduction of a canal boat (headline photo) 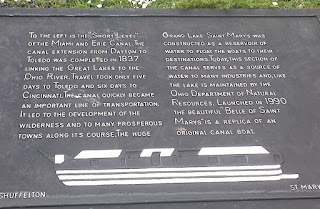 and elaborate brickwork trail that avoids (under-passes) all the cross-streets through center town. 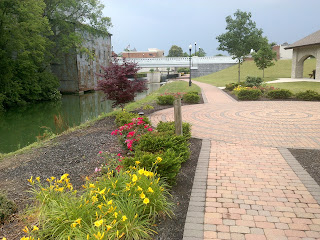 Adjacent to the canal boat display is a moving memorial to veterans. 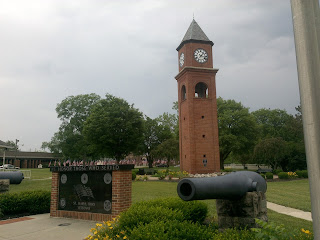 Out in the country north of St. Marys the canal tow path earthworks created a series of ponds, including the '40-acre Pond' shown here. 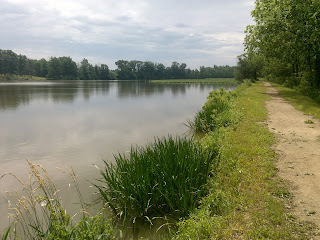 Between St. Marys and New Bremen I spotted four or five of the old stone mile markers, 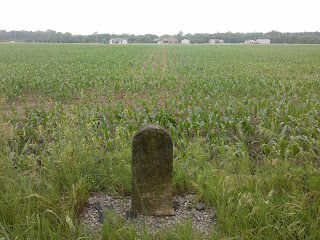 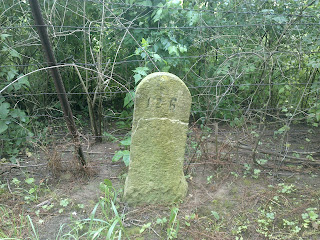 and wherever I hiked, every lock had its Ohio Dept. of Natural Resources sign, such as the one shown in the headline photo.  Most of the locks were made of wood, and nothing remains of them, but a few have been restored and repurposed into water control structures, such as Lock 14 out in the country between St. Marys and Spencerville 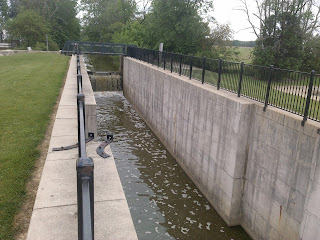 And near there was a most unusual sight--an old oak that canal builders kept and worked around. 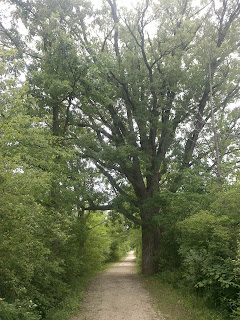 Farther north in this magical zone between St. Marys and Spencerville is 'Deep Cut', where the canal builders, working with nothing more than pick-and-shovel and mule-drawn wagons, cut the canal 55 feet deep through an obstructing hill.  I guess it was deemed easier than building a few locks, or perhaps there was no way to feed water into such locks.  Deep Cut is pretty to walk through, but the high banks were obscured by the woods, so there wasn't an opportunity for a decent photo.

What was really special about this magical stretch centered around St. Marys is that the canal was intact and still held an abundance of water.  Here are some of the country scenes: 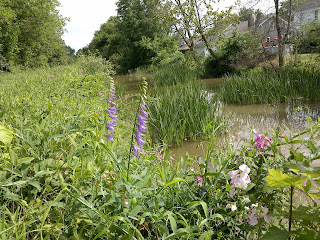 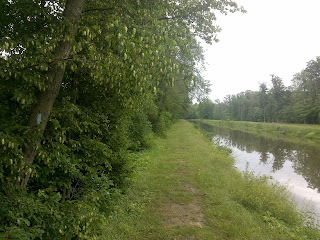 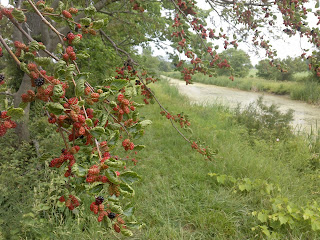 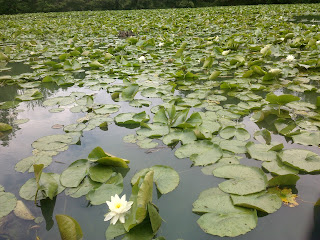 Where the canal has water it has wildlife.  Frogs were peeping and 'ribbiting' and 'Knee-Deep-ing' and 'Gung'-ing and garrumping.  There were huge carp thrashing about stirring up the mud bottom.  And I got a good up-close photo of my first ever spiny soft-shell turtle, one of the most purely aquatic of the fresh water turtles. 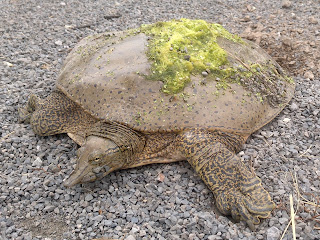 Farther north, between Spencerville and Delphos, the canal dwindled, and all that was left was a ditch. 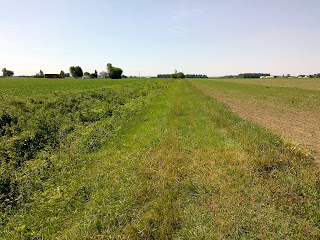 Heading north out of Delphos, I'm taking a detour from the Canal and the trail that follows it for a very special purpose--to visit my namesake town and its significant party venue.  Stay tuned for the surprise.

Meanwhile here are screen shots of the GPS tracks for these three days of hiking one way and biking back the other. 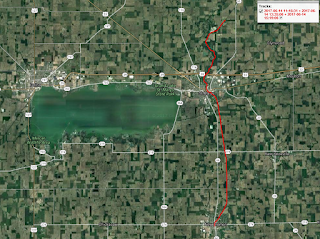 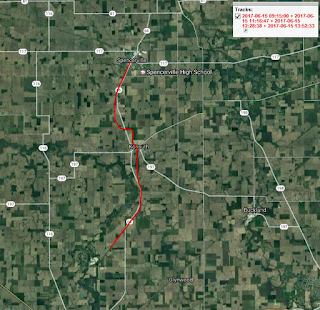 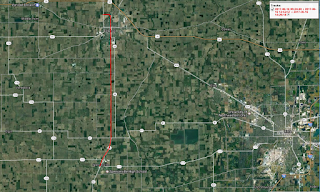 And if you are curious for more detail, you can delve deeper with this interactive map of my track.  Just zoom in on the area of interest starting from this general map of my Personal Continuous Footpath meanderings: