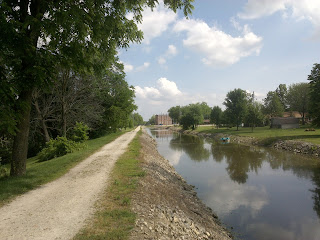 Hiking the Buckeye Trail 'clockwise,' as they call it (around the state), I have been handed over from the paved and well-maintained Great Miami River Recreational Trail onto the trail known as the Miami and Erie Canal Trail.  It's a bit of a shock.  Almost none of the M&E Canal trail is paved, there are road-walk gaps, some of which carried heavy, nearly continuous dump truck traffic, and the first pieces of real canal tow-path trail I encountered were pretty rustic. 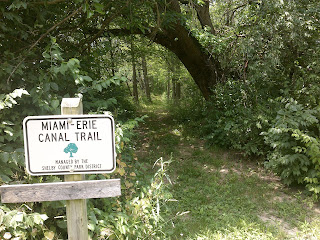 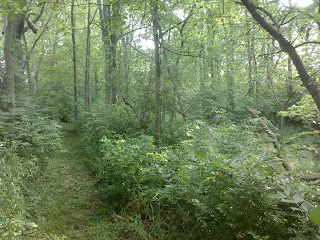 You won't find me complaining about trail in the woods, as long as it's passable.  And here it was.  For the most part the route was freshly weed-whacked and out-reaching growth had been lopped back, leaving a clear pathway, as the photos show.  The hiker will pass several surviving examples of 150-year-old stone canal mile markers.  This one announces that we are 101 miles from Cincinnati. 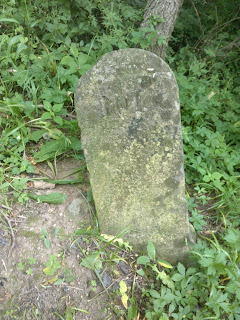 But there were also neglected sections overgrown with weeds and one significant piece coming north out of Newport, from SR66 to Cardo Road, that has been abandoned. 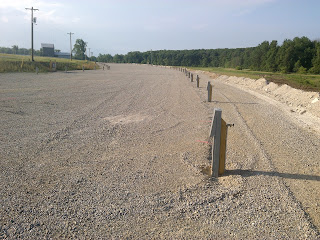 Yes, the photo above is the bed of the canal, bulldozed over, covered with gravel, and turned into a line of RV hookups in the Hickory Hill Campground.  The original tow path follows the line of posts with brand new electric outlets and spigots, and every one of those spigots was working when I passed through.  You could stop for a drink every twenty feet.

I suppose Hickory Hill still allows hikers to follow this route.  There were no signs or gates or fences.  It's a concert venue.  They like people. 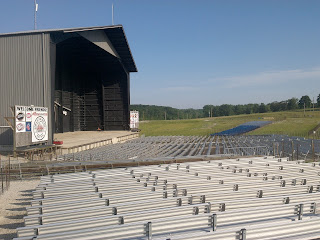 The reason the section is closed is not here.  Between here and downtown Newport the Buckeye Trail Association built a footbridge over a twenty-foot deep ravine that has cut through the tow path.  The bridge was just built in 2013, but it took only three years for the erosion in the ravine to cause it to collapse. 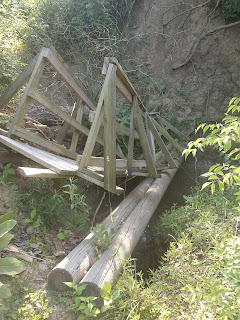 The route through here is truly impassable now, though I struggled through the ravine on hands and knees, slipping and sliding and grabbing branches and vines.  Rebuilding that bridge in a way that it will last would be a major project.   It doesn't appear that it's going to happen any time soon, if ever.

But that was the worst of it.  Elsewhere the experience was much better.  There's a genuine hiker shelter in the woods, on a section that had just been lovingly maintained by 'Snap Dragon' the day before I came through, according to the shelter register. 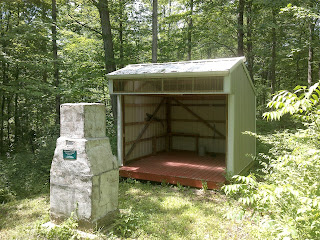 As you approach the town of New Bremen the trail seems to hit its stride.  The headline photo is of the gravel tow path looking north toward town.  In the downtown area there is an elaborate kids park, 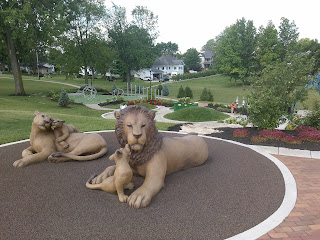 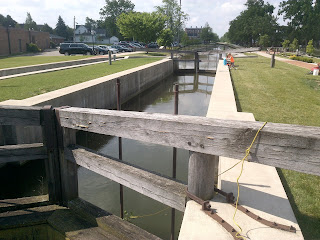 and many interpretive signs. 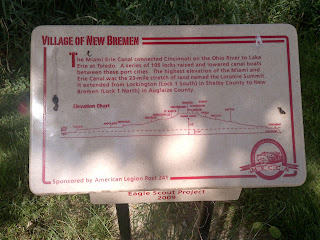 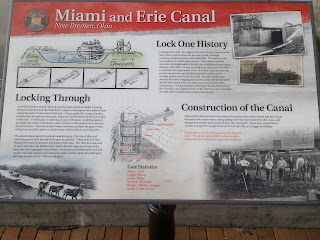 Heading north out of New Bremen the trail is even paved for a mile, and the trail is able to follow the canal without interruption for a long way.  Three more full days of hiking, to be specific.  I'll cover those in my next report.

This report covered the first two days of the five I hiked along the M&E Canal.  Here are the GPS tracks. 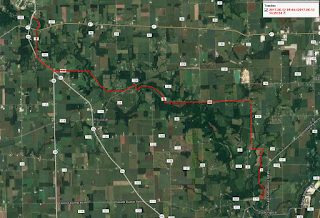 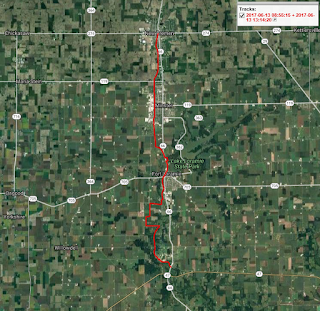