Hiking where the sun don't shine

This was not a 'Chamber of Commerce' Florida day - cloudy in the 'Sunshine State'.  Worse, because it was warm and humid the mosquitoes were out in force.  I didn't find much to photograph, although I did walk a section along the banks of the Ochlockonee River with hills and venerable old trees.  Trees among other trees don't photograph well.  The incessant plague of mosquitoes kept me from stopping except for the most interesting sights.  Anyhow, today I'm 'copying and pasting' the report from my personal journal where I basically list details rather than write prose.  Here goes:

"I drove down to near Porter Lake Campground and was hiking a leg of about 4½ miles before sunrise. It was a different geography than I’d hiked through yesterday, even right across the highway. Here the streams had no bog and cut fairly deeply into the ground. The woods had a lot of live oaks too, something I didn’t see yesterday at all.  Lately I've been paying attention to 'witches broom' growths on pines, and here I passed one that was right on the trail and photographed well from below. 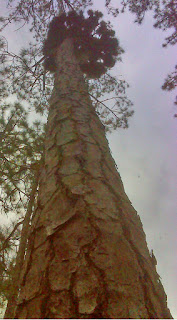 The weather started out mostly clear and chilly but got warm and humid and cloudy pretty quickly, and with that the mosquitoes came out in force. It appears they love cloudy humid weather. They were a significant problem for most of the rest of the day, though perhaps not quite as bad as two days ago with similar weather.

Next I moved my car to an official Trailhead on CR 375 and hiked a fairly short but very interesting leg that included a section along the banks and slopes of the Ochlockonee River. This walk was unexpected because my official map shows all road walk here, although the trail guide book and my DeLorme map book have it right. The off-road piece is apparently on private land.

There were lots of big trees, plenty of diverse species, a look at one channel of the big river, and even a walk around the rim of a deep narrow steephead.  Here's a shot of one of the big trees, an American Beech - a tree that grows along the entire length of my continuous footpath from Maine to here in Florida: 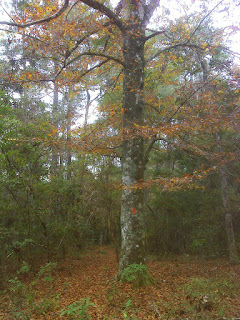 When I got back to the van it was about 12:15PM. I then had to do a whole lot of driving to scout ahead and decide if the forest roads are good enough for my passenger car to get through. I drove down to the town of Sopchoppy then up Oak Park Road to the trail crossings along the Sopchoppy River.

This access is on excellent road—about as good as a dirt road can be. Then the more remote woods roads connecting from there to the western end of Bradwell Bay Wilderness turned out to be of  tolerable quality—firm, no loose sand, and no significant mud holes. I decided that the car could make it through—there’s only one mud hole that I worry about, and of course I worry about the effect that the coming rain will have on the road. But there’s no evidence that it gets soft at all when it rains.

The scouting took two hours because of all the slow driving on forest roads. I finally parked the van on the newly closed FR 314 and parked at the west Bradwell Bay trailhead. Only later did I learn why the road is closed (from yesterday to mid-February)—some sort of forest management project involving lots of heavy equipment. The signs specifically say the West Bradwell Trailhead is closed, but I didn't see them until later, and I got away with being parked there for a few hours today.

From there the section back to where the car was parked on the paved highway was exactly four miles and I thought it might be mostly on minor roads based on the straight lines on the map and on the guidebook. So I made the mistake of assuming there wouldn’t be much boggy stuff.

I should know better than to expect good trail. There were several long boggy sections with no structures to help me get across, with just this one exception. 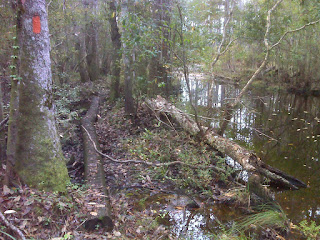 I managed to get through all but one without getting my feet wet, though that required some creative bushwhacking and some very slow picking of footsteps. I still made decent time—there were, in fact, several road segments and not much to stop and see, with the exception of this clump of yellow pitcher plants with individual pitcher-leaves that were much smaller than normal for the species. 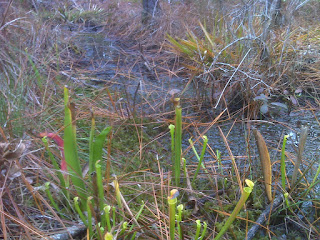 I then drove the car into FR 329, starting the gauntlet of minor forest roads, to the intersection with the closed FR 314—1.2 miles from the West Bradwell Bay trailhead. From there I walked up to the van and got it out of harms way, ending the day’s hiking at 5PM in a cloud of mosquitoes."


And that concludes my personal journal account.  Below is a map of the route hiked today, with links to the rest of the photos.