Tale of an ordinary day

Not much to report today.  Fifteen miles of trail, and all of it was through 'ordinary' albeit eye-pleasing pine savanna. 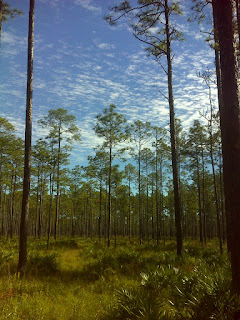 Inevitably, the 'fields' of trees can't go on forever.  Today the trail presented about a dozen bog crossings, only one of which had any sort of structure to aid the crossing.  Most were undeveloped and required either getting wet or picking footsteps carefully and slowly.  There was one long boggy section where puncheon had been put in place but had washed out during a flood. 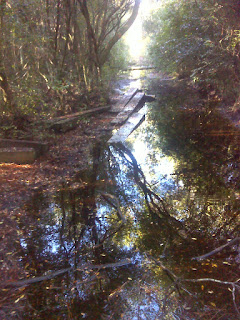 And that was today.  What makes a hiking day special for me are unusual sights and experiences, and today provided few.  The morning dew, featured in the headline photo, combined with overgrown trail meant wet pants and socks, and even wet arms, in the morning, and swarming mosquitoes in the afternoon.  Those didn't help my mood.  A patch of purple pitcher plants perked me up for a moment. 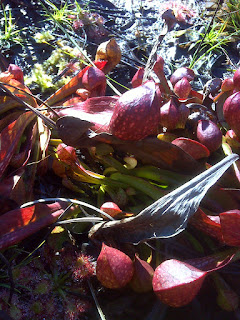 Growing among them were some robust examples of the diminutive little carnivorous sun dew plant. 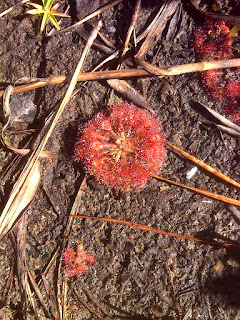 But mostly what covered the trail was brush.  The trail through here hasn't been given any attention by maintainers in at least a year.  The overgrown trail did provide some 'christmassy' color. 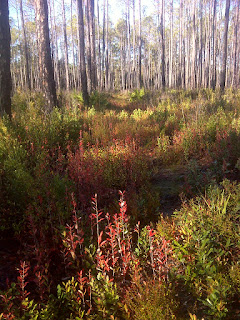 But it also made for navigation problems.  I want to highlight one example.  In the picture below the trail changes direction. 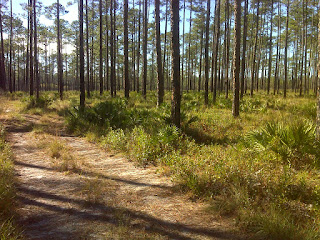 It turns to the right, leaving the forest road just before the prominent tree in the center of the photo.  But because of the growth over the trail and because the only trail marker (which is on that prominent tree just right of center) had been scalded by fire and was no longer orange, but was tree-bark colored and impossible to spot on the shaded side of the tree, it was easy to miss this turn and continue ahead on the road.  Here's a closer look at that fire scalded marker: 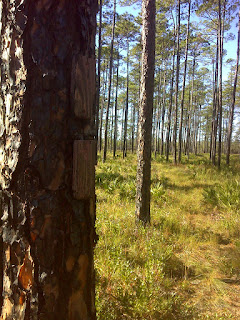 I missed turns more than once today, and was forced to backtrack.  Usually it was my fault, and usually because the trail would cross a bog on a road and then abruptly turn off the road into the brush immediately after emerging from the bog, where the growth blocks the view of the turn until you are right beside it.

So it turns out that this report is full of complaints.  Every day there are things to complain about, but on most days I'm distracted by the array of new sights and experiences.  Today there just weren't enough of those pleasant distractions.  Tomorrow, as it turns out, would be even more mosquito plagued, and it would be cloudy and dreary besides.  But I was to have a bit of a break from the savanna-bog wash-rinse-repeat cycle.  I got to walk beside the Ochlockonee River for a bit.  Watch for that report next.


Below is a map of today's travels, with links to a few more photos.