According to the NW Florida Environmental Conservancy the area between Eglin AFB and the Suwanee River has more plant and animal species than any other area of comparable size in the US.

There is an ongoing effort to create a continuous 'Greenway' that would connect the various public lands in the area. I've written about the 53,000 acre Nokuse Plantation, a keystone in that greenway arch, through which I hiked a few days ago.  Now it's time for the 38,660 acre Econfina (e-cun-FINE-ah) Creek Water Management Area.

I'm covering this amazing place in two separate posts because I took two days to hike it.  Today's post covers just the six or seven miles (distance is not clear because of a significant reroute around a closed area being prepped for habitat restoration) between Strickland Road and the FL 20 trailhead.

In this report I'm also including the twelve mile road walk I did the previous day in order to get back into the woods.  It was along straight, lightly populated FL 20 between Pine Log State Forest and the Econfina trailhead parking area.

I can cover that quickly.  It's got wildflowers.  The sign said so.  I didn't see any, though. 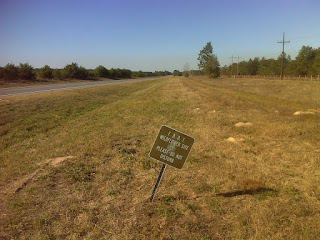 Oversimplification, I know.  It was twelve miles of walking that grassy shoulder.  Truth be told I enjoyed views of some pretty blue lakes as I got close to Econfina--foreshadows of the 'big event' 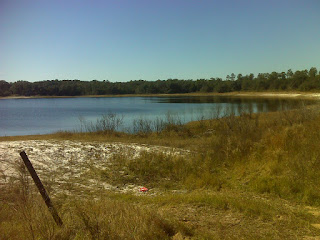 Okay - so let's get to it.  Next day I plunged into the off-road footpath and straight into a state of wonderment.

When John Muir plunged into the wilderness of the Sierra he didn't have a digital camera with him.  If he did, then we may not have the benefit of his vivid, evocative prose.  He may have relied on the imagery to convey the message to the eager public.  Perhaps this is one more way that technology is destroying the essence of what it means to be human--our adeptness at verbal communication is in atrophy.

Be that as it may, I'm using photos to depict the diversity I experienced.  It felt like every step I took was a new experience.  Here goes.

After a short walk through a field where Longleaf Pine was being restored, I dropped into a steephead ravine for a side-hill walk among huge old trees, including some species from the northern hardwood forests - remnants from the ice age - such as American Beech, White Oak and Mountain Laurel. 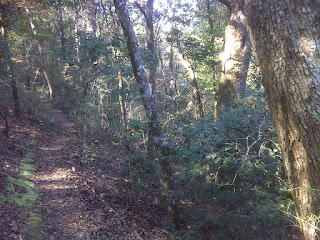 At the bottom of the ravine was a babbling brook with clear cool water hurrying to tumble over a knot of roots. 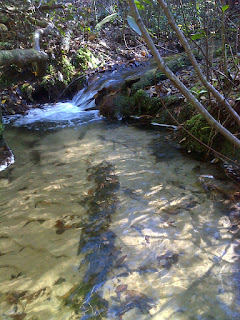 That led to the sandy beach of Rattlesnake Lake.  The sign said to watch for Alligators.  Sadly they were elsewhere today. 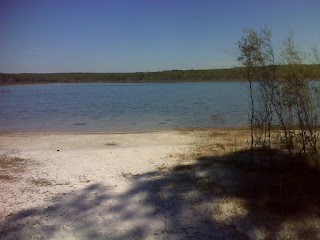 Next came a shortleaf pine plantation.  Shortleaf pine is not my favorite tree.  It has a trashy look compared to the elegant Longleaf, and here the trees were all in rows and all the same size.  But they did support a very interesting ground cover. 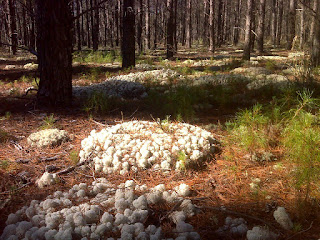 There were erosion areas cut into some of the steeper slopes within this plantation.  Here I found a mini-badlands full of little buttes - pebbles on a pedestal. 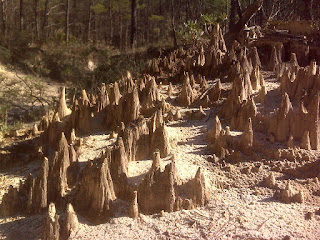 There was that freshly cleared area where they are restoring Longleaf habitat.  It is a huge devastated space, but for a good cause.  Here the trail is closed and the FTA has you walking the access roads to get around the area.  In this photo the area had just been cleared within the past week.  The bulldozer guys either had a sense of humor or a sense of art to spare this single tree. 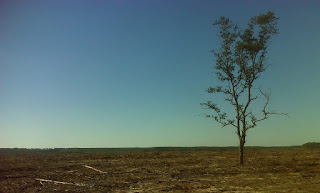 Because of that reroute I walked past an intriguing looking area of white sand, barely glimpsed through a thicket, so I pushed through the scrubby bushes to investigate and found an utterly magical secret garden full of ancient Live Oaks.  I spent half an hour here visiting these huge old icons.  their trunks, scarred with age and storm, were six, seven, eight feet in diameter. 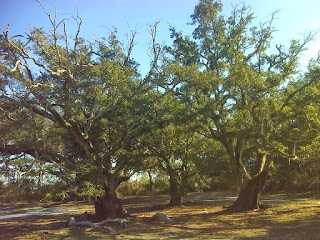 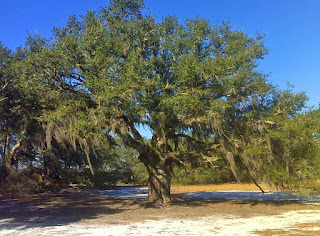 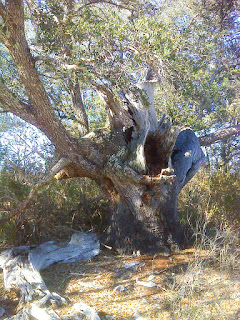 The Florida Trail ought to go through this enchanted oasis, or at least mention in their guide.

Also in the midst of the cleared area stood a forlorn sinkhole pond, stripped of all its buffer trees but a few. 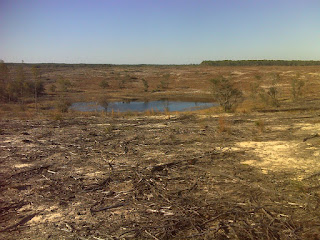 Beyond the cleared area the trail skirts another bigger sinkhole pond, Mabel Porter Pond, which was more picturesque. 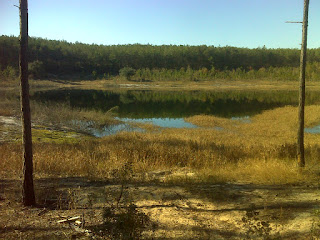 And finally, when I thought there could be no more variety to my last mile of hiking, I passed through this truly wondrous pure savanna. 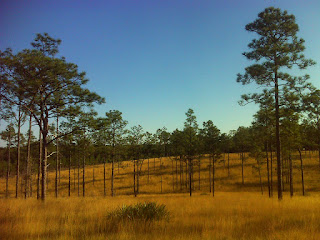 This is how Longleaf Pines naturally deal with very well drained sandy soil - they give each other lots of space and support grass speices that also depend on fire.  I've visited another area like this in my old stomping grounds of coastal North Carolina - an extremely remote part of the 56,000 acre Holly Shelter Game Land called Southwest Ridge.  That area was longer and narrower than this one.  But it appeared just as natural and unspoiled.

What a gem of a place.  By the end of this hike I felt fully bedecked with fine jewelry.  And the next day I was to be handed the crown.  There were some thoroughly unexpected sights.  Watch this space.


Below is a map of the road walk and the meandering trail through the Water Management Area.  There are links to even more photos.


Florida Trail through Econfina WMA, part one at EveryTrail
EveryTrail - Find trail maps for California and beyond