The Chipola River, Blountstown Greenway, and the long road between

After a full day of road walking, I started today with a short but memorable bit of trail along the Chipola River and ended it walking the peaceful paved greenway through Blountstown.  In between I had about seven more miles of road.

Road, road, road.  Got nothing else to say about it.  So let's get to the good stuff.

With its bed in limestone, the Chipola River below Altha has the steep high banks reminiscent of the middle part of Econfina Creek, and as with that watercourse, the great variety of species was the highlight for me.

It started as I walked a tributary down to the river and came upon a forest where mature Sabal Palmetto were growing in the wild.  This is the first place I've come to where I'm sure they were occurring naturally. 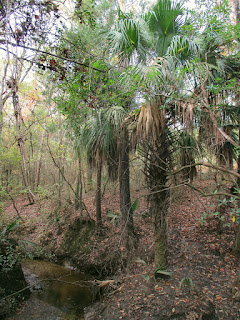 Then I noticed another species I hadn't yet seen.  Resplendent in its fall color was the Florida version of Canada's national tree--the sugar maple. 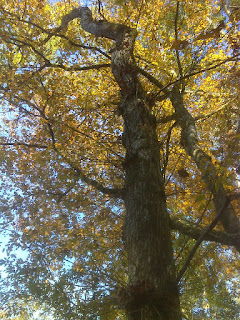 Florida's sub-species has considerably smaller leaves, and the fall color is not as brilliant, but the leaf shape is right off the Canadian flag. 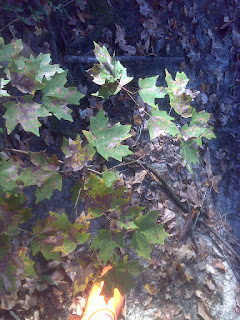 The first quarter mile of riverside walking took me past a dozen or more remarkable old trees.  Besides the cypress featured at the beginning there were swamp tupelo, more palm trees, and several big old live oaks with their characteristic out-reaching branches.  Here the morning light plays with a reflected branch on the restless river's surface.
. 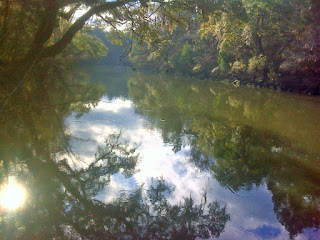 The sunlight seemed a beacon from some secret realm of peace and joy.  The river currents tugged me toward it with promises of mythic adventure just around the next bend. 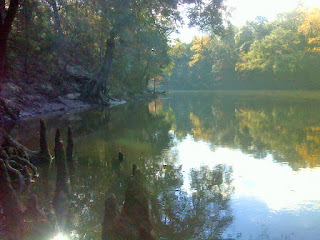 I took my time exploring these river banks, knowing this was all the wild trail I would see today - not wanting it to end.

But Greenways have their appeal too.  And for its size and population, Blountstown has a first class one.  It's nearly three miles long.  It presents the best of the downtown to the hiker, 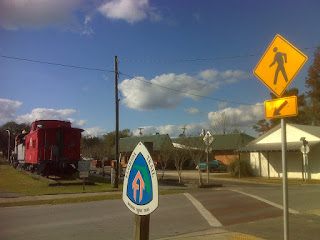 and then it does what urban greenways should--it provides an escape.  It transports you into a quiet wooded realm where the city seems a distant memory. 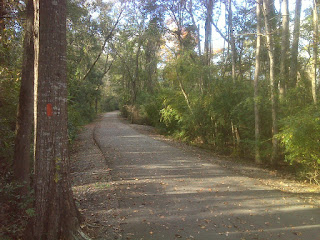 And so I ended the day refreshed.  There was more Greenway for me to walk tomorrow - the other direction from Depot Park.  And it held a surprise.  Did you know that elves live in Blountstown?  I have proof, but it will have to wait until tomorrow.


Here's a map of today's trek, complete with links to many more photos.

Florida Trail, Chipola River to Blountstown at EveryTrail
EveryTrail - Find hiking trails in California and beyond