The rapture is upon me.  Of the places I've hiked between Katahdin, Maine and the Florida panhandle, between North Carolina's mile-high balds and its storm swept outer banks, no place has consistently enchanted me, mile after mile, as here in northwest Florida.

Around each bend there is a different experience, and no more so than on the eleven miles of trail through and around Pine Log State Forest in Ebro, FL.

I chose the rare and threatened white pitcher plant as my headline.  I saw these in two places, both on surprisingly neglected trail.  One was in a boggy area along a power line clearing.  Here the trail is so poorly marked that it's easy to miss the sudden 180 degree turn that the trail takes as it leaves the power line right-of-way.  But right at that turn there was an abundance of white pitchers.  Here are two examples, one with the more common coloration and a specimen with much more anthocyanin--the pigment that makes flowers red and purple. 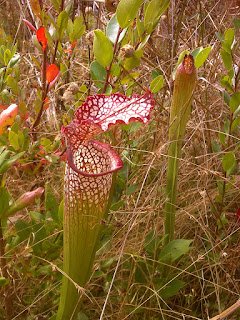 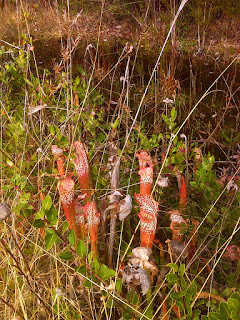 In both cases the full sun exposure seemed to be intensifying orange coloration.

The walk through this bog was tedious because there had been no trail maintenance and plenty of recent rain.  The most trampled route was under deep water.  Everywhere else the weeds were high and hiding bog beneath.  It was hard to keep dry.

The other pitcher plant sighting - the shot shown up top - came in an even more neglected section of trail - Luke Owen's Eagle Scout project. 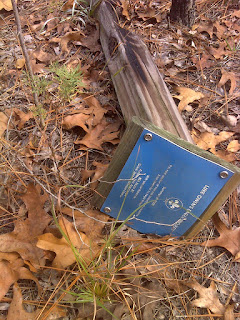 Sorry, Luke, but your sign burned down and the first mile of your project looks like it hasn't been maintained since you first cleared it in 2008. 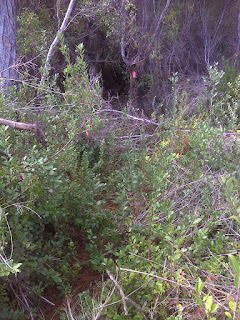 This was the first section of truly un-loved Florida Trail that I've encountered.  There were places that the deadfalls were so thick that it was nearly impenetrable, and others where it was nearly impossible to find the trail at all. 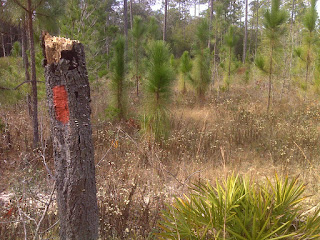 But then, when I emerged from a bog bridge on the other side of this neglected mile I came upon fresh maintenance--a mower had been through within the past day or two--cut things were still green.  Perhaps the same maintainer was headed into Luke's neglected section next.  Let's hope so.

The other headline was the trees.

Pine Log forest has plenty of mature longleaf pine for sure.  But these weren't the story.  For me the big lure was my first comprehensive encounter with bald cypress habitat since I've arrived in Florida.  Sand Pond, in the most developed area of the park, is the show-piece.  I hiked half way around this small lake, including the must-do side trip on the Campground Loop trail to the boardwalk.  Cypress trees entirely ring the lake.  Here's a photo tour.  It was early morning, and I had the place to myself. 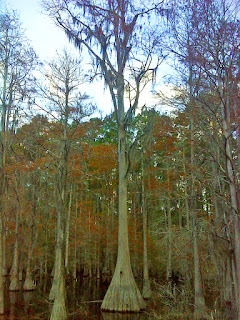 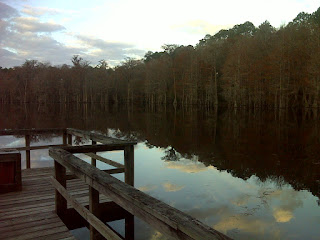 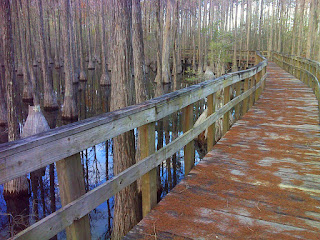 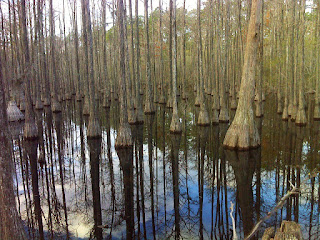 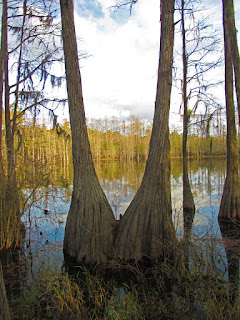 There were a few other ponds that the Florida Trail took me past.  By then the light had changed.  The sun-gilded Spanish moss looked like silver tinsel.  The reflections on the rippling water were abstract art in motion.  The sky was piercing blue amid racks of passing clouds. 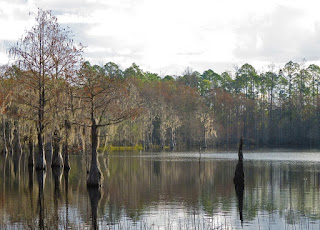 I danced on.  Next was a road walk.  Boring, right?  It was across a long bridge over the Choctawhatchee River.  There, along the quieter side channels, were more cypress.  Some seemed as old as time itself. 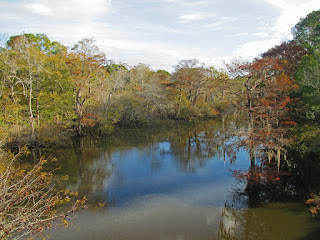 Beethoven once said "I love a tree more than a man".  I'm with him.  I've met some stern old monarchs dripping with wisdom and strength beyond reckoning.  I've taken my seat with the other young trees and listened to their sermons.   I've worked hard to learn their language.  Of the trees that I have met, only a rare few have called to me from afar and made such an instant impact as this riverside Cypress, standing proud in the morning breeze, and echoing the calls of uncounted eons out of deep time. 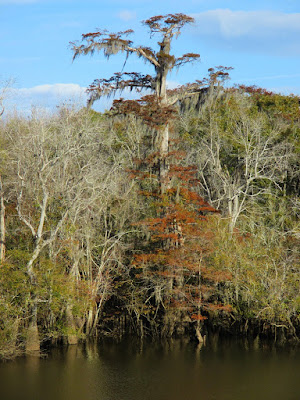 I longed to come closer, to hear more of its song.  I wanted to steal a boat and ramble these shores seeking more such voices.  It was not to be.   Not this day.  But before I finish hiking Florida, I expect to have heard a choir.


Below is the map of today's ramble.  Included are links to about four dozen more photos.