I feel like a drug addict going through withdrawal.  I'm desperately craving one more hit of Northwest Florida woodland footpath - more of the wild diversity that has made the past week of hiking such a natural high.

The next hit of such trail is the Altha section along the Chipola River.  But to get there from Econfina Creek I had to endure a whole day of road walking.

I probably looked like an addict - hands shaking, eyes glassy, face expressionless, shoulders slumped - as I trod the miles along CR 274.  There isn't much to tell, no photos to show.  I just needed to get through.

What I do when I hike highways is look through the trash, hoping against hope to find something to feed my addiction.  There's always lots of trash on road shoulders, and it's more interesting than weedy grass.  Among the beer containers and 'Eat like you mean it' fast food wrappers the observant wanderer can make some surprising finds.

Today was an especially productive day for perusing trash, if you're looking for things that civilization might deem useful.  I found a picture-hanger's level--a little eight-inch thing--in perfect condition.  I found a flawless 'Frisbee' disc.  And here's the pièce de résistance.  I found a pair of $35 UnderArmour sandals, my size, that had never been worn.

You often see single shoes in the roadside ditches, and they're rarely in wearable condition, let alone the right size.  But here was the one-in-a-million exception.  I know the price because the label was still on it.  I know they've never been worn because close inspection of the rubber soles shows not the slightest scratch or blemish, even right at the back edge of the heel.

Do I need sandals?  Hardly.  I have a box full of Crocs.  But why not try hiking in these.  I kept them.  Isn't that what a strung-out addict would do?  Plodding along the highway in the middle of nowhere I look like a hobo, so why not play the part?

See?  It pays to be observant - even if there's nothing but roadside trash to look at.  But Today I found one more unexpected 'misplaced' item along highway shoulder - not a roadkill ball cap (I keep those too), not a 'fork in the road', not a debit card (I've found a couple of them but never tried to use them).  It was something that actually fed my addiction to nature's bounty - it was a living, thriving Florida Endangered Species. 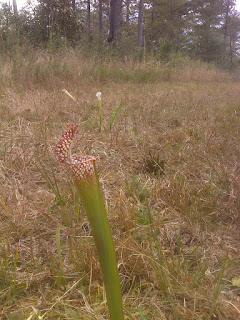 As impossible as it seemed, there in the regularly mown grassy shoulder of CR 274 were a few spindly white pitcher plants.

'Sarracennia leucophylla' is listed as "vulnerable" on the IUCN Red List (International Union for Conservation of Nature, founded 1948 and widely influential world-wide) and is listed as Endangered by authorities in Florida.

When I got finished hiking today I looked it up.  Its native range is limited to the Florida Panhandle and adjacent bits of Alabama, Mississippi and Georgia. The International Carnivorous Plant society says that there is only one known site where it grows in Georgia, 6-20 sites in Mississippi, and less than 100 sites in both Alabama and Florida.


I don't know what constitutes a "site" but I've now seen this plant growing in six different places separated by dozens of miles.

Here's an officially 'listed' species sitting where it gets regularly trampled on and hacked down by mowers.  Vulnerable individuals from a vulnerable species.  What should I do?  Report it or keep its location a secret?

As with the Venus fly trap, which grows in very similar habitat, but only in coastal southern North Carolina and a bit of adjacent South Carolina, way too many sketchy people poach these plants and sell them to incompetent amateur plant collectors. Virtually all of the poached plants die. They need boggy areas that regularly burn to thrive. Therefore Longleaf Pine is the BFF of these carnivorous plants, and Longleaf occupies just 3% of its original habitat.

Poachers and proven incompetent stewards of the wilderness occupy the other 97%.  Well, except for a few strung-out meanderers who just want to get back into the woods.


Below is a map of the above-reported road walk.