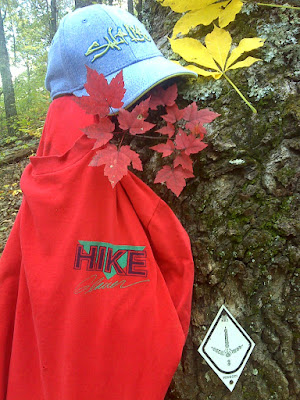 The cool weather of last week has triggered fall color change here in east central Alabama, and the woods were ablaze.  It's a special time to be hiking--a color display so vivid that sometimes startles you when you round a bend on a dry hillside ... 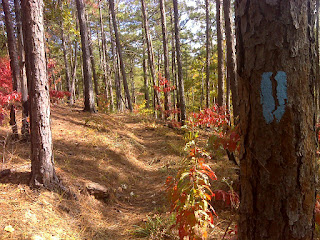 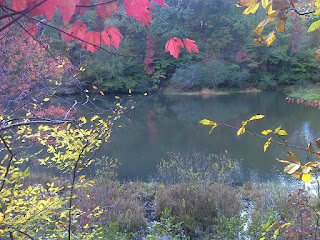 The majority of this section followed ridges, though, and there was one grueling rocky section a couple miles long that is so tough that the Pinhoti 100 endurance trail run (to be held November 7th this year) opts out and follows the dirt road, FS 600, that parallels the trail through nearly all of the two sections covered in this report (sections four and five).

The weather continued dry and mild.  There were some excellent viewpoints at rocky outcrops, and at this particular one I felt closer to the puffy clouds than to the ground. 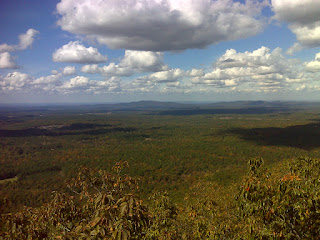 I notice that the mountains are dwindling away.  Most of them are just long, straight hills now, and the few 'lumps' don't scrape the clouds like they would in the Smoky's.  The southern terminus of the Pinhoti Trail is getting close.  In this shot from a power line clearing, looking SSW, I think the distant mound, just below the lowest power line, is Flagg Mountain, the actual site of the southern end of the trail. 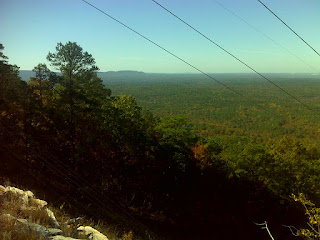 When I wasn't otherwise occupied by the fall color or the fine weather and views, I was up to my antics with my collection of shirts again, dreaming up labels or slogans.  On Day 30 I wore my best 'pre-made' hiking shirt, shown as the headline photo up top.  Here's what it says on the back: 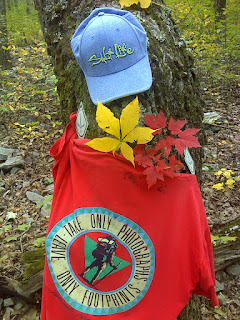 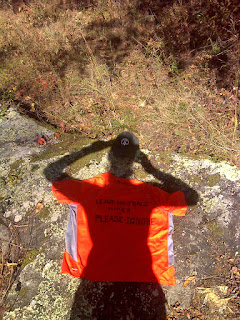 Note that the tree I used as a model for shirt number sixteen has two Pinhoti markers nailed to it.  Some trees don't seem to mind having metal tags, others try to eat them alive. 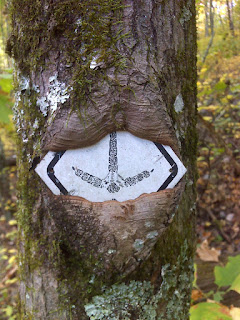 At the end of the day of rocky trail (between Porter's Gap and Adam's Gap) I felt spent and exhausted after hiking fifteen miles.  The next day, on thesection between Bull's Gap and Porter's Gap, there is some of the best cut trail I've seen anywhere. 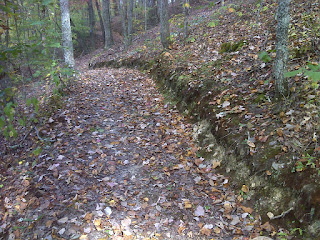 It was patiently and neatly built, four to six feet wide, level, smooth, and gently sloped with more than ample switch-backs to ease the climbs.  I hiked eighteen miles that day and actually felt invigorated when I finished.  I wanted to hike more.

Well, there is more, of course, so watch this space.

Below is a map of the two hikes with links to all the photos I though were worth the pixels they're filling.

Pinhoti Trail, sections 4 and 5 at EveryTrail
EveryTrail - Find the best Hiking in Alabama
Posted by PJ Wetzel at 6:09 AM