Back to the Pinhoti Trail - a Ridge Walk overload 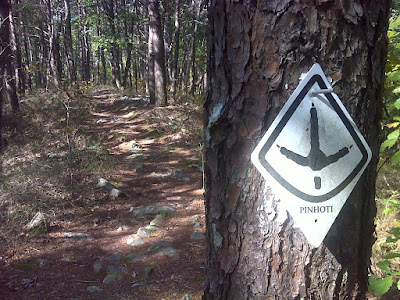 The section of Pinhoti Trail between Dug Gap and Snake Creek Gap is 15.2 miles.  The map of the route looks like the angry scribble of a psychopath.  It's a compressed, slightly tilted 'W' with an extra leg (see below).  The trail goes south for five miles from Dug Gap and then accomplishes two miles of westward progress by hiking 8 miles in an "M" shape - north for two miles, south for two, north for two and finally south for two followed by two more miles going south then a little west to drop off the ridge and reach Snake Creek Gap.  The vast majority of the distance is on top of ridges with names like Rocky Face Mountain, Hurricane Mountain and Mill Creek Mountain.  The only section that wasn't on a ridge was the second northward piece of the "M".  There the trail drops down and follows Swamp Creek, crossing it three times before ascending fairly steeply.

It's the stuff of haunted nursery rhymes:

I didn't find six-pence, but I did find a treasure that pays much richer dividends and, for me, buys something much more fundamental than a 'crooked cat, who caught a crooked mouse'.  More on that in a minute.

Before I tackled the long crooked walk I had picked up my second vehicle and hiked up to Dug Gap from I-75 in Dalton.  For more details of my two-vehicle 'leap frog' hiking plan, and the logistics of getting two vehicles from Topsail Island, NC to Dalton, GA, check the end of this post.  But first, it's back to the main focus -- the 'Total Immersion Ridge Hike'.

Don't get me wrong, I enjoyed this hike immensely, crooked or not.  The ridges are pleasant walking, the weather was bright and sunny and warm (maybe a bit too humid).  But honestly, after fifteen miles of it I was craving something different.  Even though I was on top of a mountain continuously, there were no views because of the trees.  The two exceptions were a burn area on Mill Creek Mountain and a popular rock outcrop within a half mile of the Dug Gap trailhead. 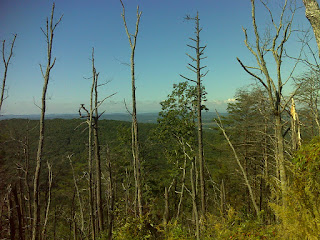 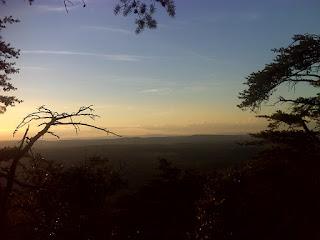 The relentlessness and the rockiness of the trail reminded me of the Appalachian Trail in Pennsylvania, but it didn't seem nearly as intense as that.  The ridges are mostly very narrow, with visible steep slopes on both sides much of the time.  That wide picture is hard to capture in a photo - the one up top is my attempt.

So now to the treasure--worth far more than six-pence, if you ask me. 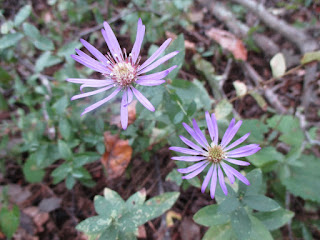 When I'm in the 'green tunnel', deprived of expansive views, my attention turns to the smaller details - flowers are a favorite.  I passed a bazillion pale lavender asters--the 'common blue wood aster'.  They're a fixture of the autumn color palate all across eastern North America.  But among them I spotted a few blooms of the far more rare Georgia Aster, shown above.  The latter is known to exist in only 118 remaining populations in four states (Alabama, North and South Carolina are the others - see This US Fish and Wildlife species assessment for all the details) so it was a special treat to spot these.

The Georgia aster has a much more intense petal color than its cousin the common blue wood aster, though the common aster wins the prize for showy yellow central florets, as in this example: 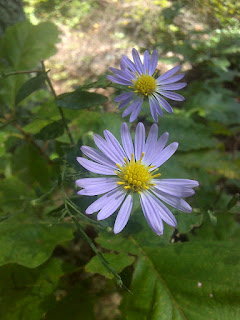 But when you photograph the two together, the difference is clear. 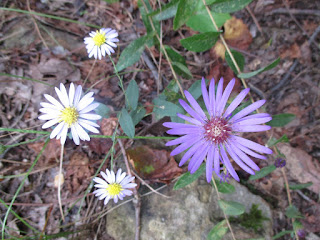 And so although the crooked walk wore out this crooked old man, the haunted nursery rhyme ended well:


... he took a crooked photograph
and smiled a crooked smile.﻿
﻿


To get from point A to point X a thru-hiker simply straps on his pack and goes.  I'm not a traditional thru-hiker.  I'm a serial day hiker.  I get off the trail every night rather than camping on it.  When I did my AT "double" in 2012 I supported myself with one vehicle, which I would park at a trailhead then hike a piece of trail both ways.

But to hike the "Florida or Bust" hike, I'm opting to hike each piece of trail just one way using a 'Leap Frog' scheme with two vehicles.

In my case point A is the Pinhoti Trail at Dalton, GA and point X is my newly purchased place in Florida where I want to eventually deliver my two vehicles.

Of course there are easier ways one person can deliver two vehicles to Florida.  There's the auto train.  There are plenty of auto shipping services.  Or I could just recruit a friend.  But my way is more fun because I get to extend my 'Personal Continuous Footpath' too - deliver one car, walk back to the other, and deliver it.

The added complication was that one of the vehicles was not at Dalton but at my former residence on Topsail Island, NC.  To get two vehicles from there to Dalton, I drove one vehicle to Chattanooga where I parked it for free at the Groome's Transportation parking lot, walked 4.2 miles to the Chattanooga airport, flew to Jacksonville, NC via Atlanta (Delta offered a super cheap fare - $119),  took the $5 public transport to Topsail, drove the second vehicle to Dalton, took Groome's Transportation shuttle ($35) from Dalton to Chattanooga and picked up the first vehicle, and drove it to Dalton.

Voila!  That odyssey took two days and was an adventure of its own.  But now the focus is on hiking.  The map of the crooked hike appears below: