Wrapping up two weeks based in South Bethany Beach, I hiked a bit more of the American Discovery Trail through Lewes, DE and starting west from there, and I hiked the length of Ocean City MD's beaches and its 2.45 mile boardwalk.

Lewes is a quaint old town with crafty/touristy shops in its downtown and a Fisherman's Wharf where the main north-south street through town crosses over the Lewes-and-Rehoboth Canal. 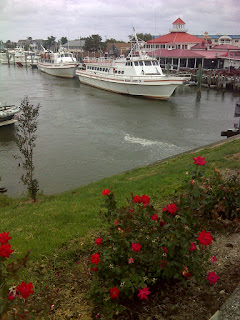 It is that north-south street, Savannah Street, that the American Discovery Trail follows as it leaves the Delaware Bay shore and begins its long westward course.  I hiked only about five miles of that, but hope to return another time for more.

On the other end of my complete Delaware Beaches hike, reported elsewhere, I extended my walk through all of Ocean City, MD to the inlet.  Ocean City features a 2.45 mile boardwalk, and as I walked it on a warm early fall morning most of the shops were open and offering deep end-of-season discounts.  A typical scene is shown up top.

Ocean City is commercially developed along its entire length.  If there is a vacant oceanfront lot, I didn't see it.  The buildings fronting the boardwalk are roughly equally divided between various commercial establishments such as restaurants and shops and places to stay--hotels and rental condos.  There is always plenty of activity, with people renting bikes seemingly at every corner and even a horse drawn carriage for hire. 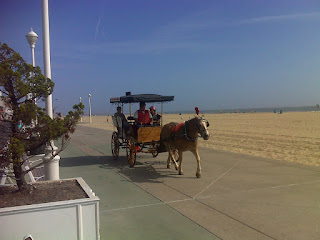 Between 94th Street and 118th Street there is a continuous row of massive high rise condos and hotels.  These monoliths seemed to loom over the beach on the cloudy hazy day I passed them. 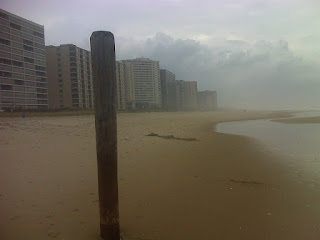 Other than that, I don't have much to show or to talk about.  The American Discovery Trail is a road walk west of Lewes on flat ground that was once farmland but is now increasingly being developed into residential neighborhoods, and Ocean City presents endless beaches lined with multi-unit dwellings.  Let's just say that if you're looking for a single family home on or near the beach, Ocean City isn't your bag.

Below are maps of the two venues reported in this post, with links to more photos.

Ocean City MD, end to end at EveryTrail
EveryTrail - Find the best Hiking in Maryland
Posted by PJ Wetzel at 9:25 AM