The Coosa Trail was opened just a couple years ago and it's a great addition to the long-distance route between the Florida Trail and the Pinhoti.  But it's not for the feint-at-heart.  This 11-mile off-road route is intense in many ways.

First of all the terrain is severe and rugged.  It runs through a large tract of Wildlife management land on the north shore of Mitchell Lake.  Elevations range only between 350 and 650 feet, but the topography is riddled with steep sided ravines--intense terrain.  And the trail makes no apologies about going right up those steep sides when it's necessary.   There are often switch-backs, but even those are steep.

And the difference between the ridge tops, an example of which is shown above, and the ravines is intense too.  Down in the shadiest of them the trail plunges into rhododendron tunnels reminiscent of the Appalachian Trail in the south and mid-Atlantic. 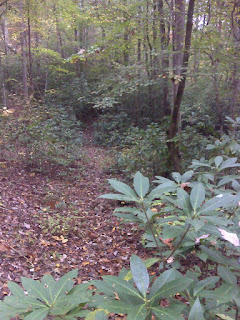 The intensity of the plant-life includes some of the biggest leaves I've seen on the aptly named big-leaf Magnolia (here shown with size XL shirt number 23, hat and size 12 volt-green Crocs for size comparison). 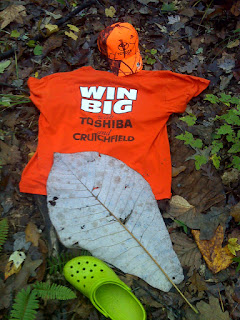 The intensity of the scenery ranged from barren scrub to almost tundra-like in clear-cut areas where longleaf pine is being restored ... 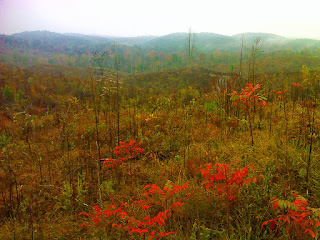 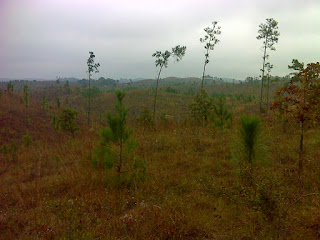 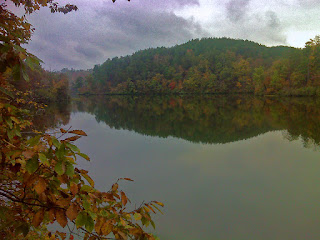 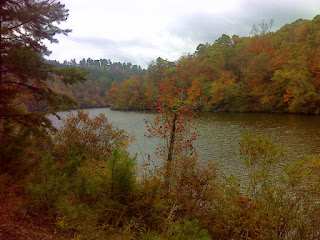 There's even a new shelter beside Lake Mitchell, apparently installed just this summer, with a killer view. 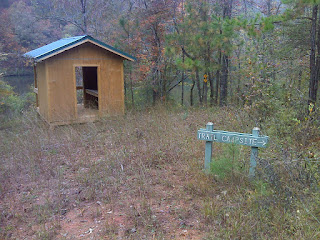 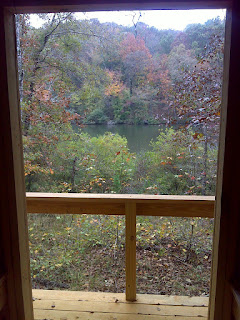 The trail register at the adjacent campsite had only six entries, and two of those were written by people who came in by boat.  The trail is intensely lonely.  My entry was the first one in five months. 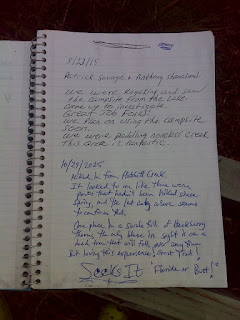 And there were places where it was evident that nobody had hiked through since spring.  A full summer's growth was crowding in, untrampled.  The general lack of use made the trail extremely hard to follow in places.  Finding the next blaze required intense concentration.  A couple dozen times I would lose the blazes and have to backtrack or stand at the last blaze in sight and look every which way to find the next one.  The turns were sometimes abrupt and counter-intuitive.

There was one place where I had to forge ahead blindly before I spotted the next blaze buried in the midst of a swale overgrown with blackberry thorns.  Leaving the last blaze behind, there seemed a more obvious route following a semi-cleared fire break, but since I saw no blazes up that route I started looking in other directions until I spotted the dead tree in the brush with the blaze.  Can you see it. 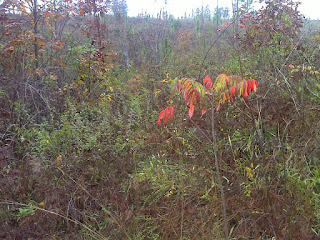 The trail had made two turns - onto the fire break and then off it after a hundred yards, and neither of these turns was marked.  Worst of all for future hikers is that the dead tree that the blaze in the picture above sits on is so rotten that it nearly fell over when I tapped on it.  By spring it will by lying useless on the ground.  Unless the dedicated maintainers from the Alabama Trail Hiking Society can work some magic, hikers are going to get lost.  The GPS Coordinates of the above photo are  32.8747° N, 86.3704° W.

I've made a big commotion about one blaze in order to give it the attention it needs, but that was only one blaze out of what was surely a thousand or more.  I want to repeat that the trail is excellently blazed and ready to hike.  Footpath on steep side-hills has been graded in most places, and there are hiker signs with arrows at road intersections and crossings and significant turns. 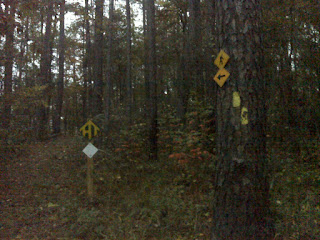 The thing this trail needs is some hikers!  A little more trampling and everything will be fine.  And I urge hikers to try it.  The Coosa Trail is well worth the extra time it takes to negotiate.  I averaged 1.3 miles per hour, but I wasn't hurrying--I set aside an entire day to do this eleven miles.  If the intensity gets too extreme, just pause and genuflect before this "Christ the Redeemer (as in Rio de Janeiro)" look-alike, naturally crafted by fire: 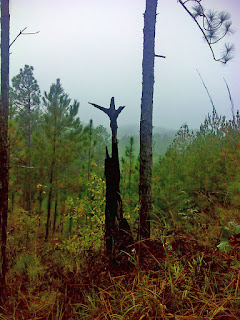 The road walk from West trailhead of the Coosa Trail up to Flagg Mountain has an intensity to its rural beauty as well.  Old Alabama was on display 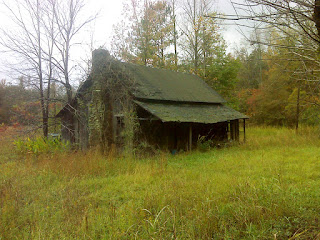 And if you keep your eyes open as you walk up CC Camp Road, about a mile up from CR16, you can spot the tower on top of Flagg Mountain. 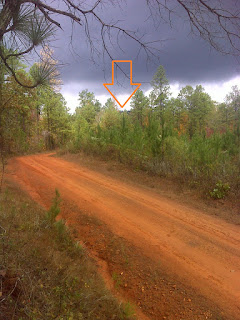 It's there, readily seen by the naked eye, but only for a moment as you pass this spot.  And here's the 40x zoom telephoto shot, taken from the same position to prove it.  The tower is not open to the public yet, so this is the best view you can expect. 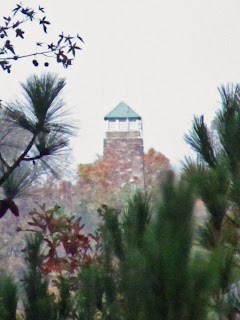 But blink and you'll miss it, as you will the next blaze on the Coosa Trail itself.  Be Intense.  Think Intense.  Here is a trail where it pays to have every sensory and mental faculty on "max" - Live Intense!  And enjoy!

Here's a map of this wonderfully intense hike - including, as always, links to many more photos:


The Coosa Trail at EveryTrail
EveryTrail - Find the best Hiking in Alabama
Posted by PJ Wetzel at 5:13 PM