Keown Falls - one of my all-time favorite trail experiences


"Florida or Bust" - Day 16
There is something very special about a waterfall that you can walk behind.  You're cut off from the rest of the world by a moving wall of water.  The gush of the cascade echoes off the rock behind you, enveloping you in sound.

It's not easy for me to explain why, but waterfalls have always been my favorite single geological phenomenon.  So a waterfall that has a trail behind it is, for me, the ultimate destination.  Keown Falls, on the Pinhoti Trail, is such a place.  Sadly the trail that goes behind that cascade is not the Pinhoti but the Keown Falls loop trail.  They ought to consider rerouting!  Anyhow, I've only hiked behind a waterfall on a formal trail in one other place--Kapaloa Falls via the Kohala Ditch Trail on Hawaii's Big Island--and that trail has since been destroyed by an earthquake.

So, as far as my resume now goes, Keown Falls is the one-and-only.  It doesn't have the volume of that waterfall shown above--it's really just a trickle by comparison, but the cavernous space behind it has room not just for a trail, but room to live--to set up camp or even build a shelter.  In my novel series, Eden's Womb, I have the main characters spend their honeymoon in a little cave dwelling behind a waterfall because that's where I wish I could.  I've always loved the artificial waterfall grottoes at water parks and hotels.  You get the idea.

Okay, so here are three views of Keown Falls - face on, from the side (looking along the trail), and looking up. 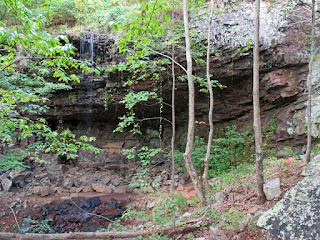 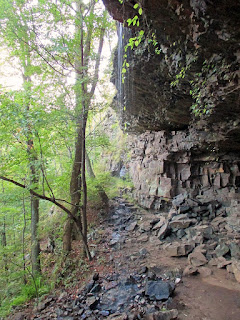 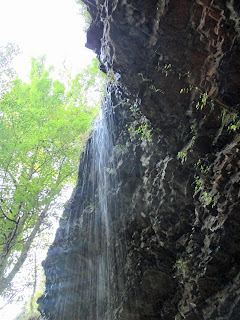 I reached the falls in the evening after a fifteen mile day, and the light was fading.  It faces east so would be best experienced in the morning.  Perhaps I'll go back.  Other special sights today included an abundance of sunflowers at man-made Pilcher's Pond (two views) and a man-made clearing on top of John's Mountain. 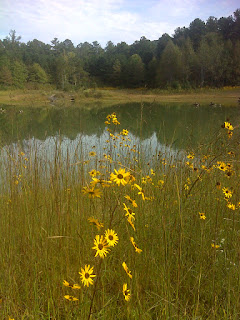 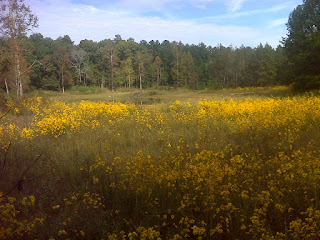 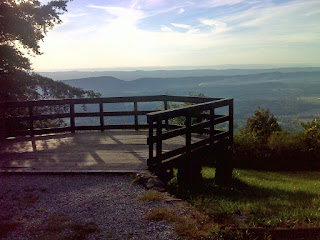 The simple things are not man-made, like thistle down and snail shells.  This area must be snail Mecca, because I've never seen so many of their shells in one hike--I saw hundreds. 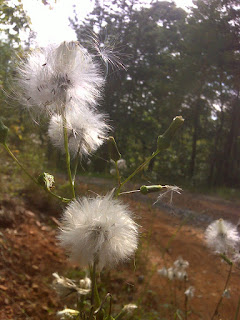 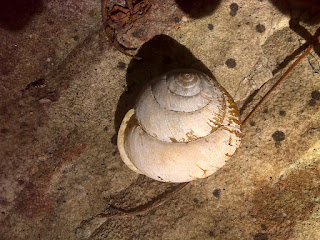 But when the natural sights and sounds don't stimulate me enough, I do tend to consider making things happen.  Today I decided to decorate my shirt. 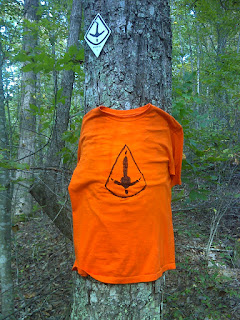 And that started a dangerous trend.  Be forewarned: I'm travelling with lots of clean shirts--like to do laundry in big batches and seldom.  I also have a collection of seventeen hats and a growing collection of new and old Crocs--the 'shoes' I now do all my hiking in.  I rotate through these hats and shirts, and will now rotate through the Crocs too.  Here are today's hat and Crocs, which I've labeled as number two because my I started yesterday's hike with all clean laundry and thus wore shirt number one yesterday.


Shirt number one happened to be the shirt I decorated to celebrate the completion of my '4368.4 miles or Bust' AT double in 2012.  And that got me thinking about decorating shirts.  The flood gate has opened. You have been warned!


I hiked between Snake Creek Gap and E. Armuchee Road today - much less ridge walking and much more variety.  Quite a bit of elevation change.  Below is a map of the route with links to many more photos: