Hiking the Pinhoti Trail - Life in the slow lane

The Pinhoti Trail in Alabama is a pure foot trail - an unadulterated ridge-rambling, creek-side-meandering hiking track cut from 'whole cloth' - that is, unspoiled forest land.  It avoids following old woods roads and old logging roads, even those that have been unused and overgrown.  It follows nothing but its own muse.

The Pinhoti Trail in Alabama is modern hiking trail, built starting in the early 1970's with intent to do what it does and with the understanding of how to build it for that purpose.

As such, it is what the Appalachian Trail wants to be but isn't - because too much of the AT is too old--built without the understanding that trail builders have today, too heavily trampled and therefore badly eroded, and cobbled together from existing tracks designed for other purposes - logging roads, fence lines and ridge lines, old recreational local trails, hunter's paths, and whatnot.

Of course the Appalachian Trail covers ten times the length, so it was a much more complicated project.  The Pinhoti Trail in Alabama was the project of a single federally funded organization--The US Forest Service/Talladega National Forest.  That gave it a huge advantage.  A lot of it was built by kids during the summers in the 1970s--kids recruited by the Federally funded Youth Conservation Corps.  The YCC still exists, but Federal funding ended in 1981.

Because of the fortuitous N-S orientation of the Talladega National Forest property, the Pinhoti Trail naturally became a long-distance through trail, which would be a natural extension of the Appalachian Trail.  The Alabama Trails Association has been promoting this extension for most of thirty years.

I have mixed feelings about whether the Pinhoti ought to become part of the AT, with Flagg Mountain as the southern Terminus.  The Pinhoti Trail has the shelters in place (conveniently spaced in Alabama, though there's only one in Georgia that I recall).  It has huge modern trailhead parking facilities.  In many ways it's more prepared to be part of the AT than many parts of the AT itself are.

But if the Pinhoti were part of the AT my hiking experience would be much different.  I've met only a handful of people on the trail in three weeks.  I've nearly gotten lost because the trail is so little used and the new fallen leaves are beginning to cover the track.  It's what the early AT pioneers would have experienced - Earl Shaffer, Dorothy Laker, Gene Espy, Emma Gatewood.  What a delight it is for me to have that sense of pioneering experience.

I've had the full 21st century AT experience too, so I can compare.  I hiked Georgia in late March 2012 during the peak of the thru-hiker bubble.  I would pick up a pebble each time I met a hiker.  Some days I had a hundred pebbles in my pocket by the end of the day.  It felt like a freeway at rush hour.  I prefer the wilderness isolation, thank you very much--life in the slow lane.


I have been enjoying perfect cool fall weather.  Temperatures range from the upper 30's F at night to the mid 60's during the day.  I have not seen a single cloud, and the visibility is unlimited.  I can imagine no better hiking conditions, nor can I imagine a better woods venue for hiking than the open understory of the fire-fashioned Alabama woods.  I've been happy.

The four days covered in this report found me in lake country.  The trail hits no high peaks.  It meanders through valleys and over randomly oriented hilltops, often following side slopes between the two.  It passes a series of lakes that appear to have been built for flood control, and many of them have no public access other than the Pinhoti Trail - fantastic!


This section is the venue for the upcoming Pinhoti 100 mile endurance race, to be run November 7th. They use 86 miles of Pinhoti Trail.   I had the benefit of fresh clearing of blowdowns in preparation for the event. 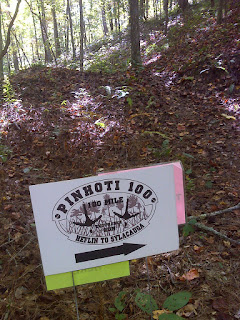 Near the end, on Day 26, I was getting close to Mt. Cheaha, at 2413 feet, the highest point in Alabama, and was granted several excellent views. 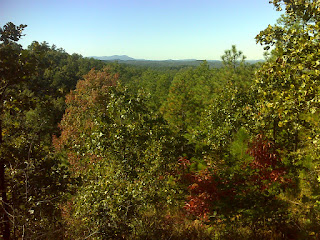 I'll be passing that mountain (The Pinhoti doesn't go over its summit, which is a popular driving destination and has a road to it and a tower on it) and hiking through the Cheaha Wilderness in the next couple days.  Weather is forecast to warm up - even get hot for a change.  Bring it on.

Below is a map of the route I hiked, taken by my GPS, and including links to a total of 71 photos:


Pinhoti Trail - High Point to FS 518 at EveryTrail
EveryTrail - Find the best Hiking in Alabama
Posted by PJ Wetzel at 4:55 AM