Walkin' in the Woods again - and back on the NCT


The big Michigan cities of Battle Creek and Kalamazoo are closing in on one another.  A couple more decades and they'll squeeze together into one big megalopolis.  But for now there's still some country between them, and still some laid-back small town flavor too.  The comfortable little town of Augusta splits the distance between its big neighbors east and west.  And the North Country Trail uses Augusta to launch the hiker on his/her northward quest into the heart of the state.

I like little towns - towns that aren't growing and sprouting suburbs, towns that feature a block or two of businesses, where you can see one end from the other.  In the case of Augusta the trail passes just three blocks east of downtown and that's enough to keep you in a residential neighborhood for barely four blocks.  Heading north from town there is rural trail that skips what there is of a downtown, following the edge of a cornfield instead. 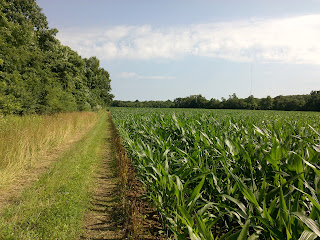 And just south of town is the Fort Custer State Recreation Area (FCSRA) with many, many miles of well groomed and well-marked trail, none of which the North Country Trail uses. 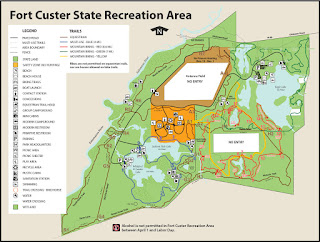 I chose the River trail, used mostly by horses.  It follows the east bank of the Kalamazoo River, connecting to roads at a gate on the far SW corner of the Recreation Area and emerging in the north at the Recreation Area's main entrance where my footsteps finally actually joined the North Country Trail.

I had planned my connecting road walk from Defiance, Ohio to reach the NCT here.  The climax of the road walk took me through another great little town named ... wait for it ... Climax.  Here I had a chance to let Hat number Eleven pose with their American Legion Post's memorial tank. 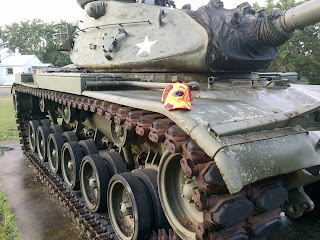 It was a long haul from Defiance, so it felt *so* good to be off roads and back on real trail. 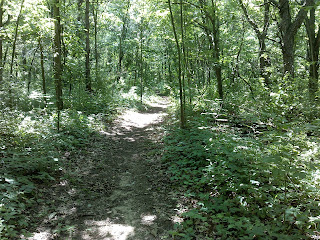 The River Trail provides a nice view of the big lazy Kalamazoo river. 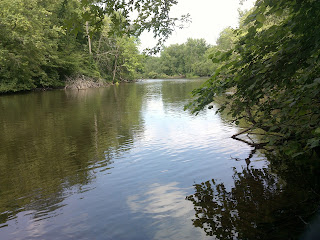 The trails in FCSRA are well groomed and meticulously marked with 'you are here' maps and directions to the next marker post. 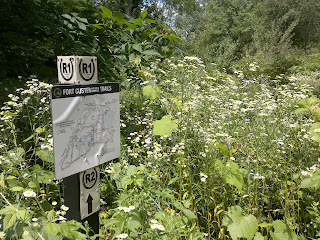 It passed all too quickly, and I was in Augusta.  At the Augusta Road trailhead I finished the four block road walk and let Hat number twelve pose on the trail register box. 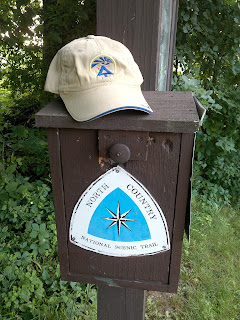 Then came the walk beside the cornfield and on into the Kellogg Biological Station with the covered bridge (photo up top), and I was back following the blue blazes. 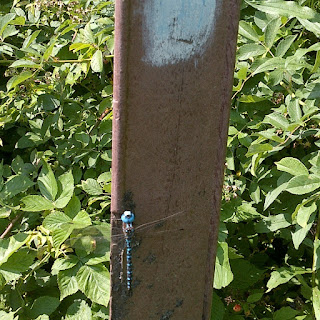 That particular blue blaze had a matching companion - a dragonfly every bit as blue as the blaze.  It's called a Spatterdock Darner - Rhionaeschna mutata - and it's quite rare across most of its range.  I don't think I've ever seen one before.

Through the vast Michigan State U Kellogg Biological Station's holdings, the trail provides wonderful variety.  There was perfectly groomed footpath in the woods, 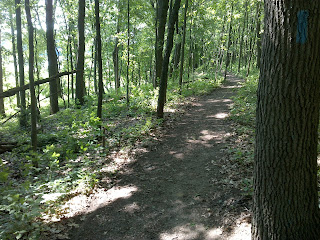 a walk beside Duck Lake, 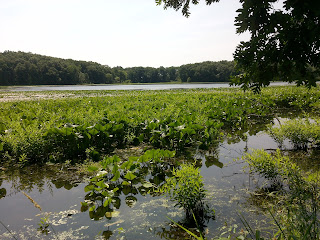 and open trail through fields 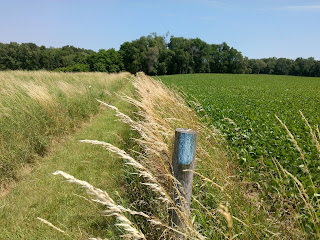 including this oddly placed bench with a view of cows in a pasture. 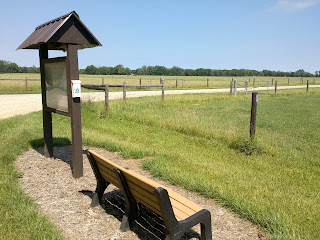 It's good to be back in the good graces of the NCT, doing some more of their 'certified' trail.  I actually dislike that designation, because as a result, NCT seems much less committed to trail continuity.  Many of their road walks are not blazed at all.  The impression is that there's no real route connecting the certified segments.  That's one of the reasons that I feel free to choose my own route.

So here's the map of the day where my personal choice re-connected with certified NCT at Augusta. 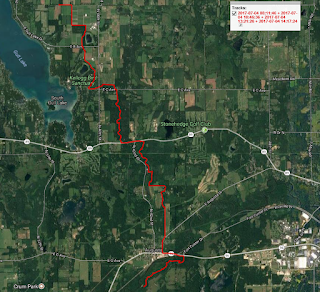 And here's the hike of my own choice through Climax and into the Fort Custer Rec Area that I did the previous day.  It is a wide view that shows how I targeted the gap between Battle Creek and Kalamazoo 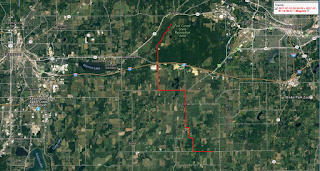