Surging through Lowell - Home Base of the North Country Trail


I stormed into town on a Saturday with the streets jammed.  The town of Lowell was abuzz.  The streets were packed with tourists and celebrants.  It was their annual Riverwalk Festival.  Every parking spot downtown was full.  The only spot I could find was 'Fifteen minute parking only'.  But that was enough, because in the heart of all the swarms of people - the town's biggest attraction of the summer - the North Country Trail Headquarters office was closed.  Their office hours are 1-4PM M-Th., 10AM-4PM on Friday, and they apparently saw no reason to make an exception for the festival.

Maybe they had a vendor booth that I didn't notice in my allotted fifteen minutes.  But as circumstances worked out, I never did get a chance to return to town when the offices were open.

It would have been just for talk - just to check in - a feel good moment.  I already have the t-shirt and hat (number 24 in my rotation) 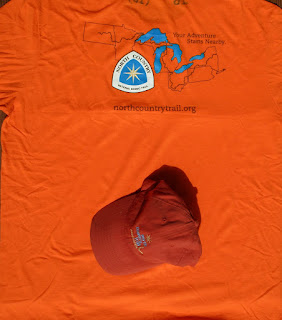 I already have all the maps I need, and I'm already a member.  My only questions were answered on their web site. (They have had just sixteen end-to-end hikers in the trail's history.  They offer a patch and a rocker to long distance hikers at various mileage levels and state completions.)  If I just wanted to look around, then I think I managed to do it all by peering through the windows on the quiet Sunday morning when the photo up top was taken.  The space inside was small.

The Lowell Riverwalk itself is small -- only three blocks long. (Note that the on-the-ground trail blazes and the 2013 handout map from the NCT web site [shown below], tell the hiker to skip one of those three blocks, between High Street and King Street.  The online interactive map includes that extra block.) 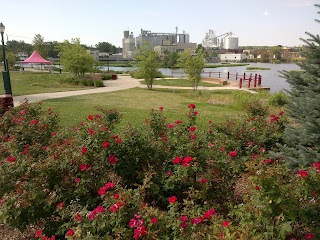 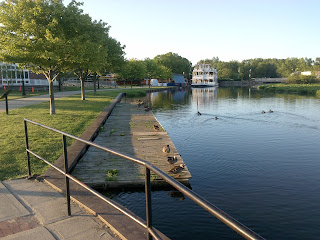 The best of the North Country Trail hiking in the area starts a mile north of town and goes through some hilly landscapes with deep woods. 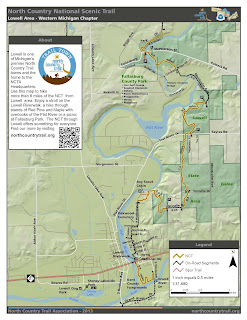 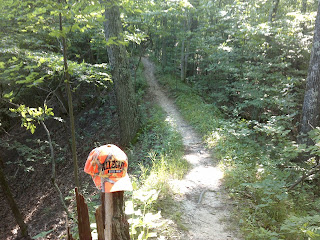 And there are a few high barren spots where the soil is too sandy to support vegetation. 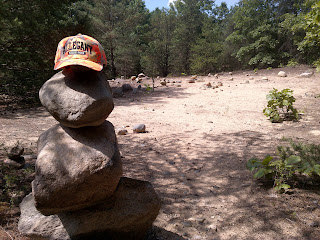 Hat number seventeen got to pose for both of those cameos.  But this report starts two days earlier when I was wearing Hat fifteen and coming out of the north end of Barry State Game area.  This looks like an old nursery or Christmas tree farm. 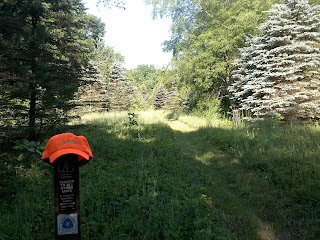 Next, coming into Lowell from the south there is a walk along the Paul Henry Rail Trail along the Thornapple River through Middleville. 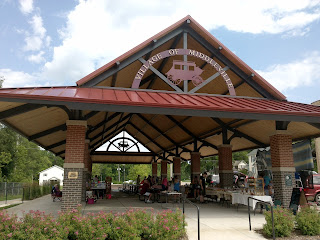 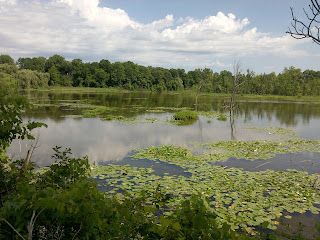 Everything looks peaceful and normal in the Friday morning downtown market scene above, but it's deceptive.  All the power in town was out and it would stay out until Sunday.  Just before dawn on that Friday morning a horrendous severe squall came through.  Fifty-five mph winds had ripped down dozens of trees.  I had to crawl through several major blow-downs like this in a few miles of paved rail trail. 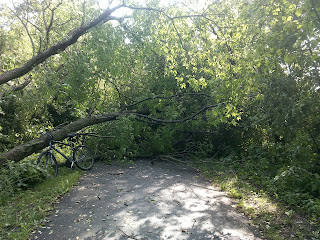 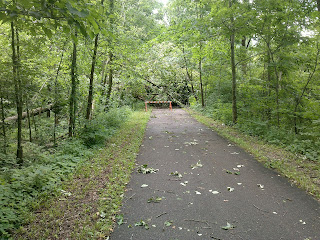 After the Paul Henry Trail, there is a short section of really pleasant woods trail through the Middleville State Game Area, then there are nine miles of road walk to Lowell - corn fields with blue sky and roadside sky blue cornflowers for hat number sixteen to pose with 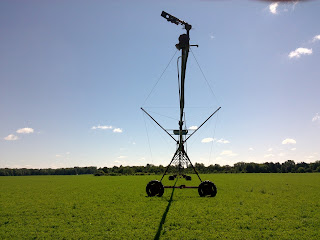 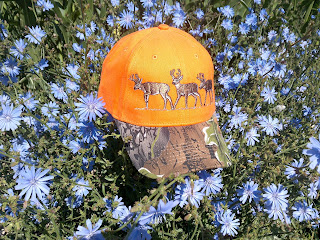 This road walk includes a little dip into Dolan Preserve, with a section of dead end trail beside the Coldwater River 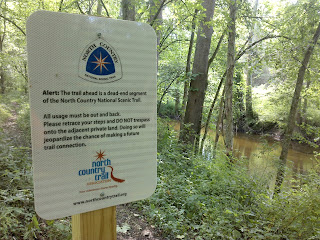 and it includes an inexplicable bypass of the considerable boardwalk trail through Maher Audubon Sanctuary. 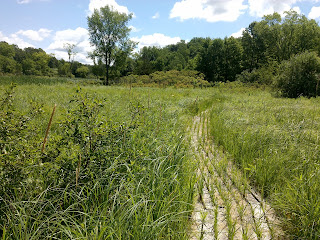 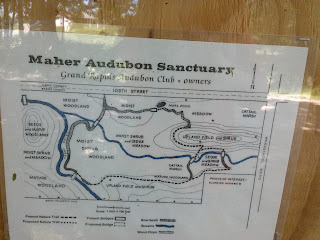 With a little bushwhack from Woodschool road along the ridgeline between wetlands I easily included Maher Sanctuary in my hike.  NCT could easily build trail along that ridge.  I'm surprised that they haven't already.

All in all an eventful and variety-filled three days along the North Country Trail.  For another perspective I present the screenshots of the GPS tracks. 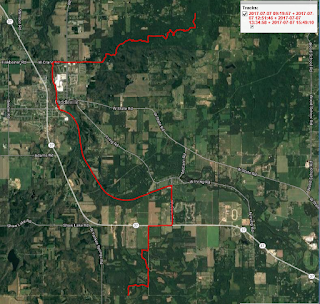 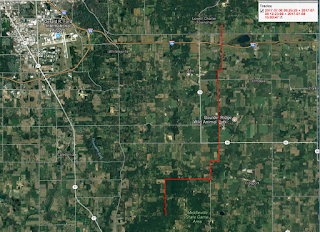 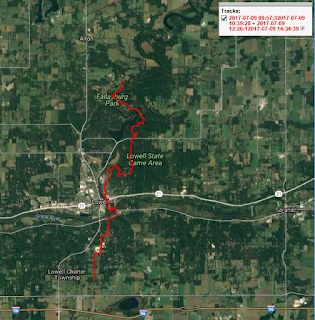 And for the more inquisitive, you can delve into as much detail as you wish on the interactive map below.

Now, I don't normally do this, but I have built up some concerns about the NCT management.  It seems to me that there is a disconnect between the North Country trail leadership and the trail hiker experience.  If they can't even correctly blaze the trail within three blocks of their headquarters, it tells me that something is wrong.  If they don't care enough to open their doors one Saturday out of the year when the festival named after a section of the trail is taking place, then to me, there is something wrong.  What?  My impression is that management is too focused on managing the trail on "paper".  Too much time in the office.  Too much emphasis on talking the talk - on the bureaucracy and politics associated with managing a National Scenic Trail, and not enough about 'being there' on the trail for hikers.  Just my two cents.
Posted by PJ Wetzel at 1:29 AM