Who speaks for the silent?  Amidst our harried, frenetic, modern, gadget-addicted existence, who has the courage to remind us of our humble, simple roots?

As I'm fond of saying, we are the ape who left the jungle to explore the world.

Henry David Thoreau sends us back there - into the woods - to live deliberately, to reconnect with the very marrow of life. 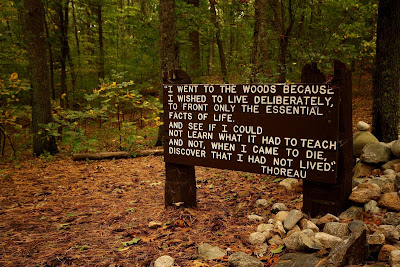 To be sure, there are others who have done the job well.  John Muir is a true icon.  But for me, there is no better spokesman for the wild than Henry David Thoreau.

We remember Thoreau today because he was an eloquent spokesman, a pathfinder in a world of followers, and a man of principle, willing to live his beliefs.

Two hundred years from now, if Thoreau is still remembered, we will be able to say that we have not yet lost our way.