The White Pine Trail - Too Good to Miss


The North Country Trail put me on this 92-mile-long Michigan 'Linear State Park', but I'll be damned if it's gonna get me off.

After forcing me to do another dreary road walk from near Lowell to the town of Rockford, northeast of Grand Rapids, the North Country Trail joins the White Pine Trail, a well-supported rail trail with state funding and its own web site.  The NCT follows the White Pine Trail for 7.4 miles to Cedar Springs and then leaves it, launching the hiker on yet another long road walk.

Another road walk? Really? When, stretching northward before my feet lies a long, beautiful, finished, non-motorized trail with peaceful country walking well away from aggressive dogs and harrying traffic - just beckoning me to follow it?

Here's what Hat number nineteen says to that. 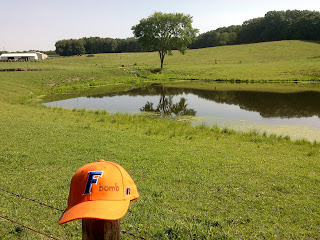 I recalled the advice from good old Yogi Berra, who once said, "When you come to a fork in the road, take it."

And as venerable old Abe Lincoln said, while agreeing to pose with Hat 21 in Rockford, "Be sure you put your feet in the right place [PJ] ..." 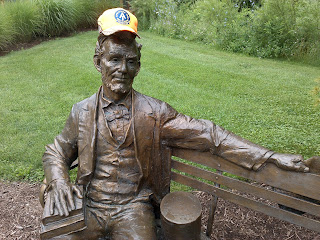 So I did.  I've been enticed to leave the North Country Trail once again.

The North Country Trail will meander through National Forest land on foot-only trail and I'll be following a bicycle trail.  Mistake?  I don't think so for at least five reasons.

First, bike trail provides more variety.  I've hiked National Forest all over the country.  Unlike parks, National Forests are there simply to preserve and manage trees.  Trails in national forests are 'Green Tunnel' all day.  You see lots of trees and are hard pressed to find much else worthy of note.  Not so on bike trails.  In the midst of the long road walk to Rockford, the NCT used another short bike trail, just four miles--the Cannon Township Bike Trail--and it gave me a significant boardwalk over a wetland, where hat number twenty posed 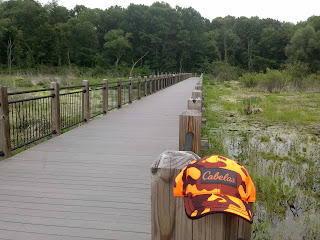 and some artfully constructed revetments. 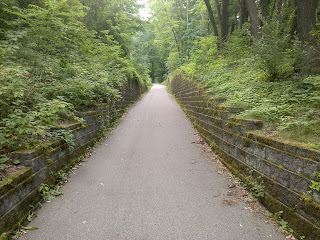 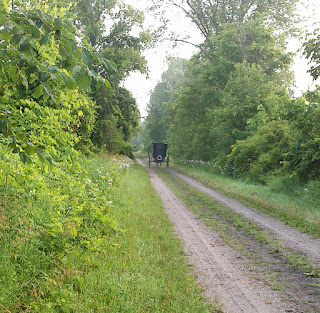 This is the fourth bike trail I've hiked that doubles as a preferred Amish thoroughfare.  I had hat 23 pose before a field of hand-gathered hay, the hundreds of neat stacks barely visible through the morning mist. 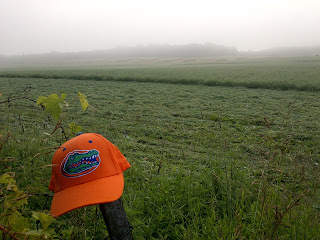 The Amish Settlement here, between Morley and Stanwood is among the most conservative anywhere.  Had I taken the North Country Trail I would have been oblivious to this Amish settlement and its contribution to the farm-to-table healthy lifestyle movement.  Conservative?  Well, this particular Amish Farm has its own web site and Facebook page.

Reason three - Infrastructure.  Bike trails are better funded, get more government attention (including maintenance), than hiking trails.  Trailheads are abundant and spacious, usually have restrooms, and often have other services nearby.

Reason four - although there are dogs, they aren't aggressive.  This includes the kind out walking their humans on leashes as well as this unaccompanied mascot of Ferris State University at Big Rapids, who happily posed with Hat number eighteen. 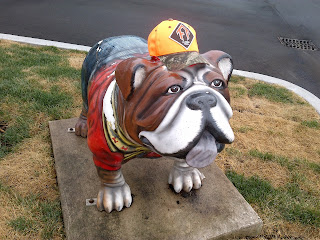 Finally, reason five - serendipity.  I'll be hiking lots more trail in the woods once I finish the White Pine Trail.  In most places the hiker doesn't have two distinct options to choose from.  But here I had a chance to do something different.  A chance too good to miss.

The five days covered in this report started near Grand Rapids and ended at Big Rapids.  Here are the screen shots of the GPS tracks. 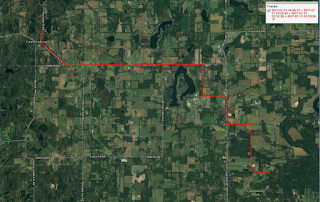 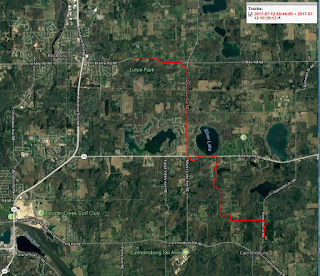 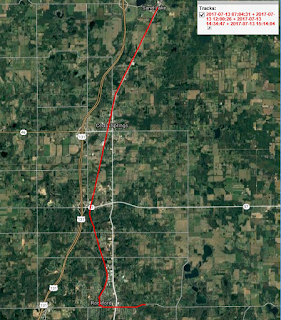 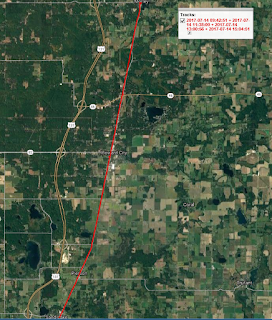 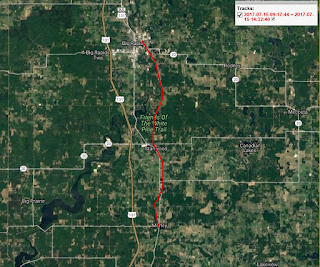 And here, for reference, is the interactive map - the big picture, which can be zoomed to see much more detail.