Some well-kept Trail - a hero who keeps it so, and the frightful road walk to get there 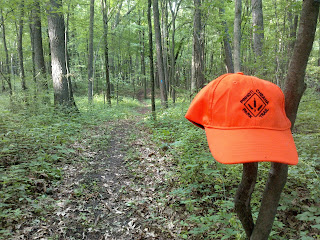 This is the spiritual core of the Chief Noonday Chapter of the North Country Trail Association, one of 40 local chapters and affiliates that are the National organization's 'boots on the ground' when it comes to making the trail work.

Whenever I run into a maintainer on the trail, I go out of my way to thank them for their work, and that was the case when I met Mick Hawkins in Yankee Springs doing a trail reroute around a sensitive habitat area for a newly Federally Listed threatened rattlesnake, the Eastern Massasauga.

We had a nice chat there, and then met again a couple hours later as I was finishing up a trail leg and Mick arrived to replenish brochures in the Kiosk.

Mick is low-key, but he's a mover when it comes to his local club.  And his local club's section of the trail stands out among the others as being better maintained.  Best of all, they have blazed their road walks.  Here's Hat number thirteen with an unusual trail marker, placed by a local enthusiast who actually lives on the route. 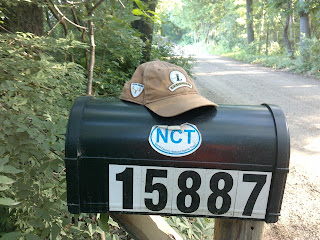 Of the North Country Trail sections I've hiked from central New York to here in SW Michigan, only one other local chapter has stood out as head-and-shoulders above the rest.  That's the Wampum chapter in far western PA.

The North Country Trail through Yankee Springs Rec Area features a close encounter with Hall Lake with its two significant islands and water lilies in bloom. 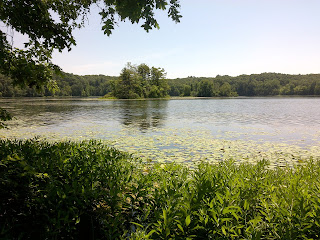 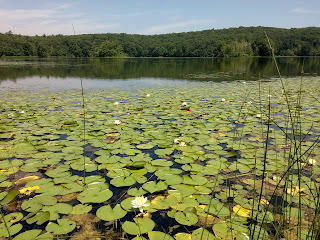 And just north of there it features a significant climb to Graves Hill overlook.  It was about 125 feet according to my GPS.  The actual overlook is on a side trail, and it's overgrown so that it no longer has a view, but just the climb was something significant for me after 400 miles of flat hiking.

These hills are made up of glacier-deposited piles of sand and gravel.  And unfortunately where there is a resource like that just sitting there ready for the taking, there are people ready to exploit it.  On my road walk approaching Yankee Springs from the south, I was regularly blown off the road by the monster tandem gravel trucks. 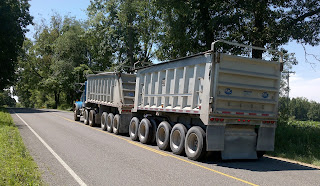 The roads here have little or no shoulders.  There's no place to hide.  Can't blame the local chapter for this, unless it's for not finding off-road trail options--a nearly impossible task through privately held land.

So I just clenched my jaw and 'Carried on Bravely.'

Here's the GPS Tracks of the approach road walking and a topo map with the route through Yankee springs showing the many various gravel and sand hills, many with geometrical shapes from having been dug up and hauled away. 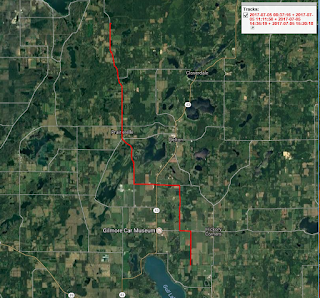 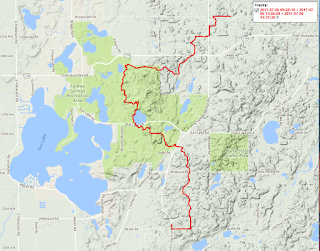 If you want more detail of the route, zoom in on one of the maps below - the segment through Yankee Springs, and my overall Personal Continuous Footpath track.