Two days in the woods then a change of plans 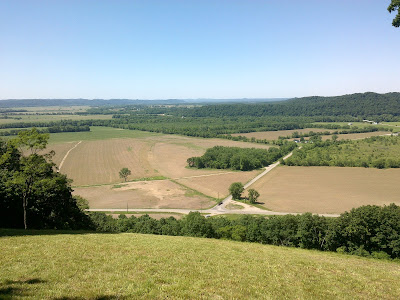 Lemons often become lemonade if you take the time to let the sour meld with some sweetness.  For me there's nothing sweeter than discovering non-motorized trails that connect with one another--trails that can take me from horizon to horizon, trails that let my heart soar as I ramble cross-country day after day using only the soles of my two wandering feet.

With one of my two support vehicles in the shop for major body work, I've had a chance to do some trail scouting.  The car is at a shop in Chillicothe, Ohio, about twelve miles from the closest pass of the Buckeye Trail.  But I've discovered that Chillicothe has its own trail, right in the heart of town.

I first noticed it driving in and out of town.  It's a paved bike path.  Lots of cities have them, so they're not something I normally pay much attention to.  But with my changed circumstances and a new frame of mind, this time I decided to do a quick Google search for "Chillicothe bike trail" and I discovered that what I had seen beside the road was just the tip of quite a gigantic iceberg.  One that may sink the Buckeye Trail's ship.

More on that in a moment.

With my changed circumstance I'm currently limited to hiking out-and-back day hikes with one vehicle--park at a trailhead and hike into the woods and back out.  Since the other vehicle went into the shop I've done just two of those, taking three other days to take care of a mountain of paperwork and logistics.

The bits of trail I hiked were on either side of US 35 between the quaint little town of Londonderry and the Scioto River at the western boundary of Scioto State Forest. 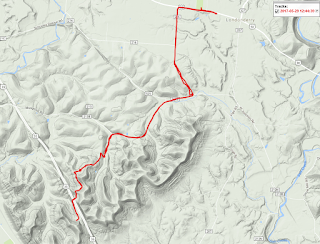 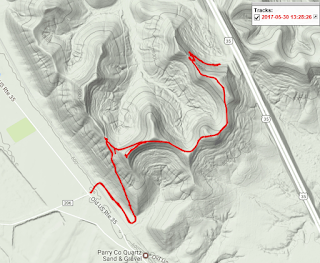 I passed through Londonderry on Memorial Day, and the Friends Church there has a huge cemetery with a veteran's memorial. 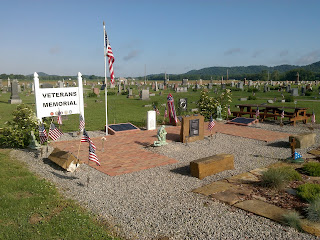 People were assembling there for a Memorial Day Parade followed by a Memorial service in the church/meetinghouse.  I was there a bit too early and didn't take the time to stick around for the parade, but I saw some antique cars and a number of fire trucks driving in, and could hear a band or two warming up in some staging area down the road.

Outside of Londonderry there two nice trail sections on private land.  One crosses a rolling pasture that I was sharing with a herd of mama cows and their calves.  Fortunately no bulls.  Fortunately cows don't have the same mindset as bears when it comes to protecting their young.  They vacated the area and left me with the wind in the grass and a few old oaks for company. 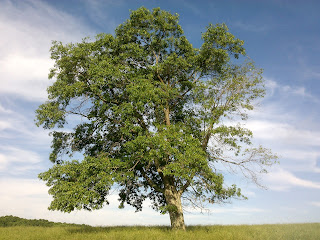 After a two mile road walk south of the pasture, the trail enters the woods again on private land and later passes under US 35 through a hiker-dedicated culvert. 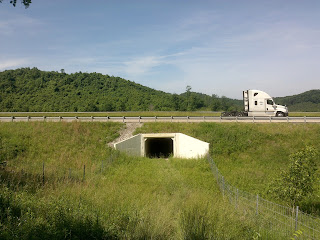 It then parallels the freeway where it cuts through the side of a hill.  The culvert is visible again in the second photo. 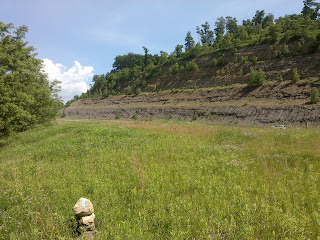 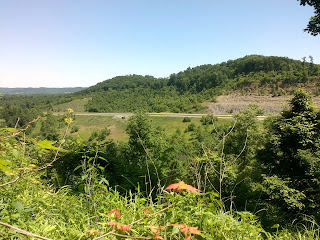 Between the sites of the above pair of photos is a section of hand-built foot-only trail, newly opened just a couple years ago as far as I can tell, that has been utterly neglected since it was built.

I found this section totally overgrown with blackberry thorn bushes.  The lower part had been well blazed, but the upper part of it was so badly blazed (not blazed at all) that it was trial and error, and the only clue to the course of the trail was the side-hill hoeing work buried deep beneath the overgrown vegetation.

It was a bushwhack, and tougher than most bushwacks that I’d actually attempt. Each step I had to gingerly push aside thorn bushes or step over or duck under them. So it was really slow going . . . and then I had to hike back through it on the way back to my vehicle.

Pretty discouraging, especially at a time when I'm fighting off a general sense of discouragement.

Worse yet, the vegetation I was wading through was heavily infested with ticks. I picked dozens and dozens off my legs as I walked. Most of them were the pernicious little deer ticks that carry Lyme Disease. When I got back to my two-ton steel tent I kept finding more, eight or ten I pulled off my legs and flung out the window as I drove. And back at the motel I found still more. A dozen more before I finished finding them.

Back on the previous reported hike in Tar Hollow State Forest I had encountered equally overgrown trail and nearly as many ticks.  Suddenly my 'gold standard' woods-trail hiking was losing some of its luster.  I normally seek out and look forward to the woods trail sections, but these I would recommend avoiding until maintenance can be done, and had I known the conditions beforehand I would have bypassed them.

There were good times too, though.  Once up on the ridge the route passes what I estimate to be Ohio's best viewpoint--certainly the best I've seen by a long shot.  It's from 'Hang Glider Hill' beside a microwave tower and overlooking the Scioto River valley.  The photo up top was taken there.  Here's a look at the nice grassy knoll where the Hang Gliders launch. 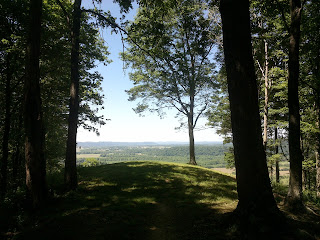 So as I reported with Tar Hollow State Forest, the hiking was a Jekyll/Hyde sort of experience.  Immediately ahead of me on the Buckeye Trail is Scioto State Forest.  Then a road walk, then Pike State Forest.  And on ...

What if there was an alternative trail where Dr. Jekyll is in control of himself, and Mr. Hyde seldom appears?

This brings us back to that bike path in Chillicothe.  My dream for this country is to build an Interstate Trail System that is every bit as robust and connected as our Interstate Highway System.  Ideally this would include government acquisition of continuous public rights-of-way where necessary, and government funding to build and help maintain the trails.  I'll be posting more about this concept soon.

One of the great existing sources of rights-of-way is abandoned railroads.  It turns out that the bike path I noticed in Chillicothe is part of a 34 mile paved rails-to-trails bike path called the Tri-County Triangle Trail.  It roughly parallels US 35 west-northwest from Chillicothe to the town of Washington Court House.  But that's not the end of it.  After an unfinished gap, the trail resumes east of Jamestown and continues through Xenia and all the way to downtown Dayton, where the Buckeye Trail just happens to pick up the bike route heading north out of Dayton.

Suddenly I have two viable choices:

A.  Follow the Buckeye Trail to Dayton.  This alternative involves 355.0 miles of trail, 192.3 miles of which is road walking including some particularly dangerous road in the vicinity of Cincinnati according to BTA Director Andrew Bashaw, and more than half of the off-road portion is woods walking in State Forest land, which my experience has shown is seldom hiked and unevenly maintained.

B.  Take the Tri-County Trail, the Jamestown-Xenia Connector, and then the Creekside Recreational Trail straight to Dayton.  Including the 12 miles to get from where I'm currently hiking up to the start of the Tri-County Trail in Chillicothe, this involves 92.2 miles of trail, only 30.4 of which is on roads and virtually all of the rest is paved, tick free, underbrush-free, non-motorized bicycle trail.

I've chosen plan B.  From my perspective this is the more 'connected' route (much less road walking).  I'm already having some regret, wondering what I might be missing in the woods.  But the fact is, it wasn't a hard decision.  I could always go back and hike the woods sections later.