Took four .45s to the body. Still ticking, but I’m off trail 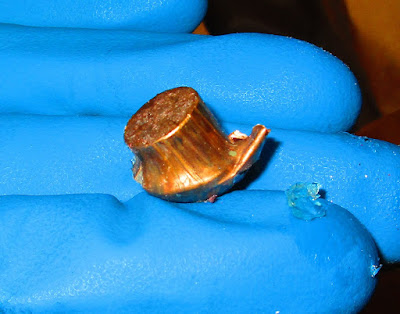 … until the auto shop can fix the damage. 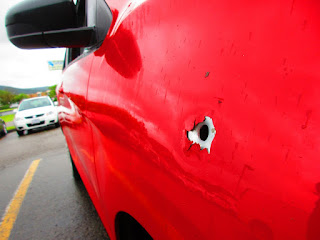 No, I’m okay, really. It was overnight vandalism to my unattended car. You see, I have two vehicles with me, hiking “leapfrog style.” 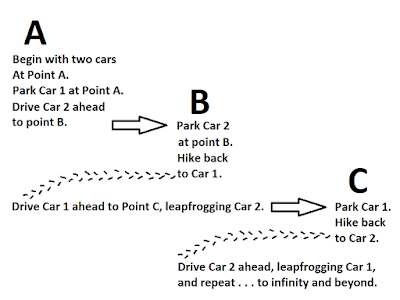 Amazingly, the car took no mechanical damage.  I could drive it away.

Two side windows were shattered, though, making for a drafty trip back to the two-ton steel tent.

Bullet one was aimed toward the engine but got stopped by the framework inside the quarter panel. That’s the hole in photo above.

Bullet Two passed clear through both front doors and would have hit me in the legs if I was sitting in the driver’s seat. 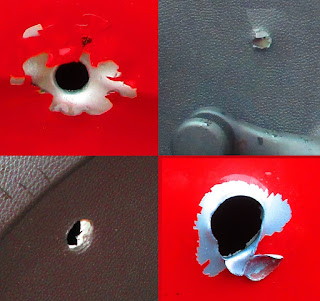 Bullet Three came through the passenger front window and lodged in the driver’s side door frame right behind the window. That bullet would have gone through my torso, had I been sitting in the driving seat, and might have been fatal. 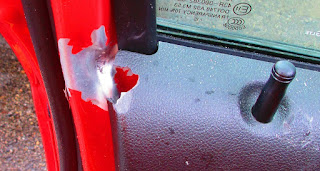 Fourth bullet hit the right rear door at the window line and shattered that window. 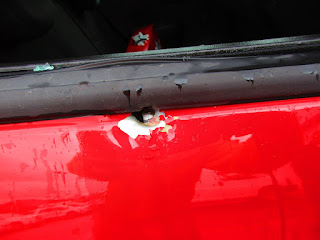 It's all covered by insurance, except for a deductible.  I may have the option of having the insurance company cut me a check then do the repairs as I see fit.  Potential big profit ... if I leave the bullet holes.  What do you think?  Should I get the four bullet holes fixed or should I keep them as conversation starters? I’m still thinking about that. Maybe I’ll keep one. Maybe the photos are enough. Yeah, the photos and the memories are probably enough.

The vandalism occurred in Tar Hollow State Forest. The officer who responded is a State Natural Resources Police.  He was wonderful and helpful.  He's determined to track down the culprits.  He retrieved two of the slugs.  That's his hand holding one up top.  And he found all four shell casings at the scene.  Likely these are carrying fingerprints and tell-tale DNA evidence.

Of course the purpose of my being in Tar Hollow State Forest was to hike the Buckeye Trail section through it, so I still need to report about that.

Hiking Tar Hollow was a real Jekyll/Hyde affair even without the punctuation of the vandalism at the end of my last leg through the forest. The trail varied from virtually grown shut with shoulder-high thorn bushes to freshly weed-whacked with a boulevard-wide swath cropped right down to the ground. 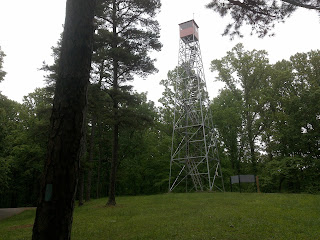 The day before I entered Tar Hollow found me doing a road walk with rustic farm scenes like this, 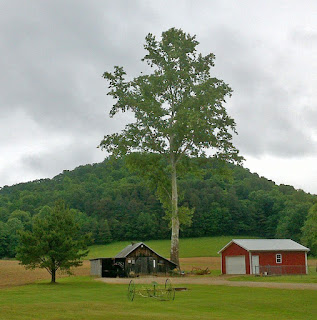 and some newly blooming tall weeds. 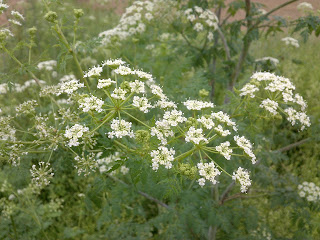 The most interesting part of the road walk was on a truly gnarly 4WD road. 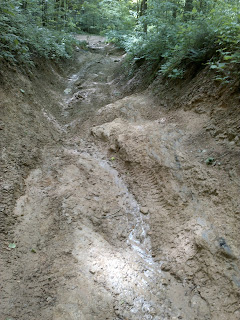 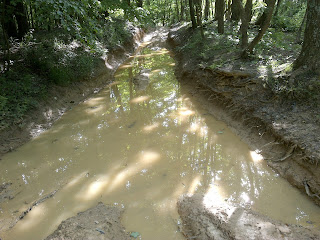 And there was a nice section in the woods on property owned by the Buckeye Trail Association. Here there was a campground, some pretty woods walking 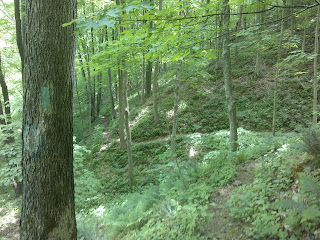 And an excursion through a recently clear-cut area that provided contrast, if not scenery. 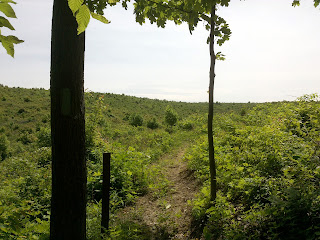 I don’t know how others would react to the experience of such mindless vandalism, but I guess I knew something like that would happen eventually, leaving a vehicle unattended overnight in unfamiliar territory. I’ve read plenty of examples of it happening along the AT. I’m inclined to go on as before. I have a few days to think about it while the repair work proceeds, so in the meantime I’ll be doing out-and-back hikes using my other vehicle.

Here are screen shots of the GPS Tracks for the three days covered here.  Interactive maps are available through my Wikiloc page. 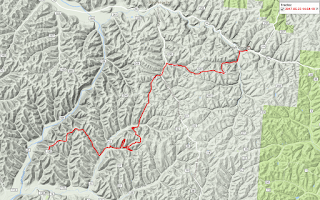 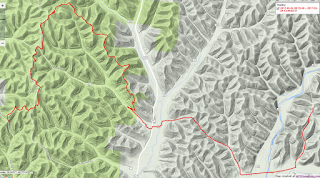 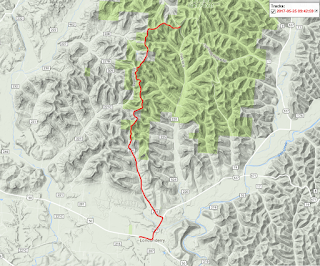