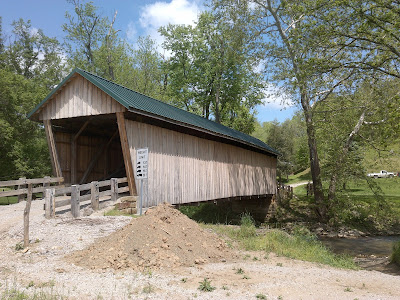 It was three days of road walking, mostly on very quiet roads.  But it was still road walking, meaning that even when you're in the woods, you're buffered from nature by a wide, dead, gravel or asphalt surface.

There were some fine sights along the way, though.  The Williams Covered Bridge, built in 1872, was perhaps the highlight (see above).  I crossed the Muskingum River at the Lock Six dam in the town of Stockport.  Water was roaring over the dam. 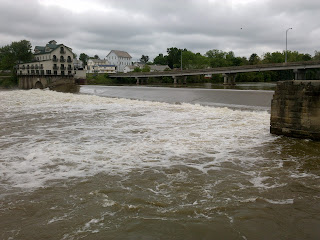 That building on the far side is an Inn.  You can rent a room with a balcony overlooking and overhearing that wonderful white noise of cascading water.  Here's Lock Six itself.  It's still in use, apparently, though it dates back to the nineteenth century. 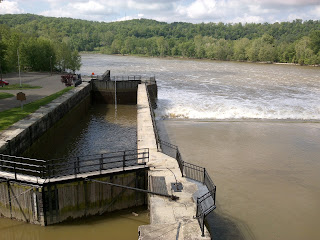 Along Olney Run Road, the creek itself offered a nice cascade on a much smaller scale. 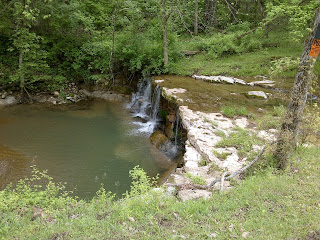 For the fourth time in my hiking career I gained canine hiking companions for a mile or more.  These two young gals barked at me as I passed their farm, but then became amiable and curious scouts until we approached a house with another dog. 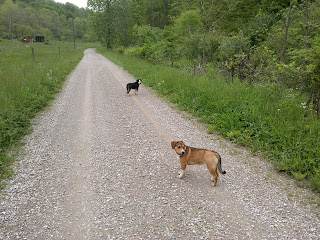 What possesses a dog to leave its home and follow an itinerant wanderer I do not know.  I wonder what it says about their masters.

I have to confess that in the middle of the second day of this road trek there were two one mile stretches in the woods on former roads across private land. 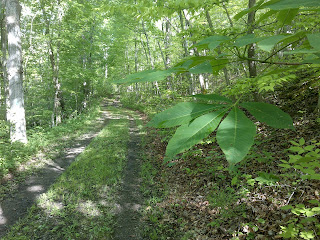 That's a buckeye leaf in the foreground, the namesake of the Trail and the state tree, Aesculus glabra.  It's in bloom now.  Its clusters of flowers aren't very showy until you look closely, then they resemble little 'jack-in-the-pulpits' or pitcher plants. 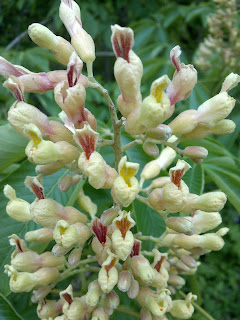 More conventionally showy flowers are abundant now too.  Here are wild blackberry blooms with a backdrop of domestic roses and iris. 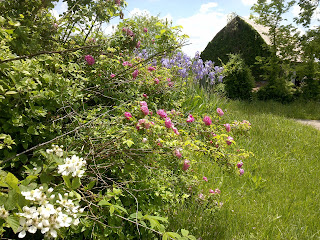 Four times during this three days the roads the trail uses were so minor that they didn't have bridges over creeks. 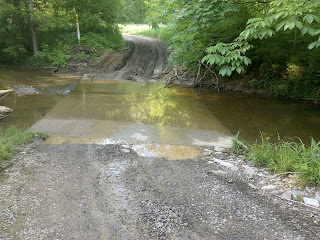 But they're still roads, not trail.  Thankfully by the end of the third day I was on the verge of a good chunk of popular foot trail around Burr Oak Reservoir.  On the third day, at the town of Chesterhill, the American Discovery Trail joined the route of the Buckeye and North Country Trails.  Wow.  Three Trails for the price of one. 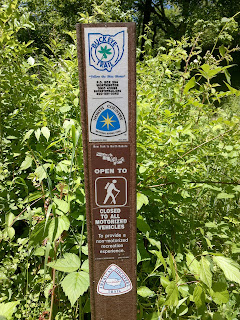 Here's the GPS track screen shots for the three days, as I worked my way generally toward the west. 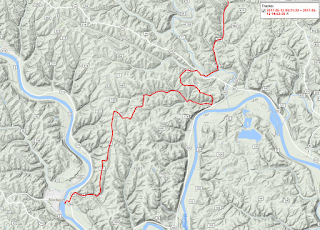 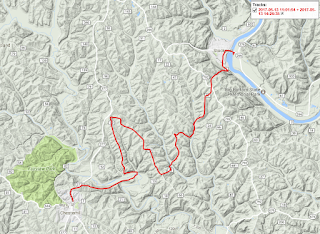 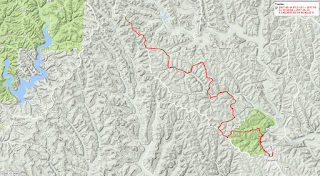 I'm not presenting the interactive maps from Wikiloc because there are a whole raft of them.  To study my route in all the intimate detail you want via the Wikiloc maps, you can always go to my 'Hopping Rocks' page.

So tomorrow its into Burr Oak State Park.  I can't wait.