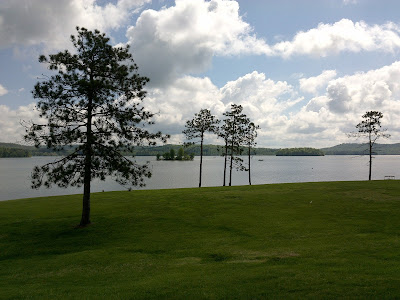 Some of the scenes along the roads were fun.  The 'money' shot (above) of Senecaville Lake was taken from the highway where it crosses the dam.

But the foot trail was just 'green tunnel' stuff--fun to be in the wild, but lacking much of photogenic interest.  I noted only one sight along the foot trail worth sharing--this rickety old orange-painted Fire Tower. 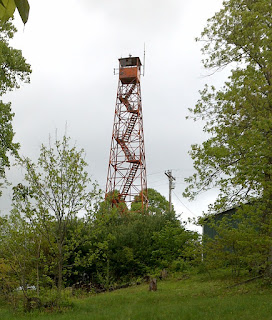 I happened to run into the owner of the property here.  Matt was out turkey hunting.  He told me that he wouldn't want to climb that tower.  It's been abandoned and neglected for decades.  He and I shared a bond, having both lost our fathers in the past year.

The road walks were mostly on quiet roads.  More nasty loose dogs than cars.  But there were some decent views, enhanced by the cumulus clouds on this breezy cool day. 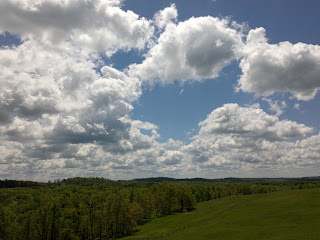 And there was another quirky old rusting structure.  This old oil storage tank on Pipa Road has been converted to an oversize trail marker. 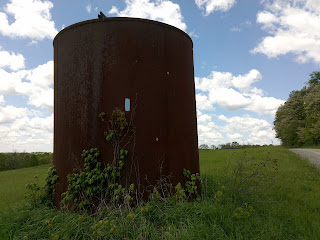 Otherwise the profusion of May flowers got my attention.  Here are shots of the wild white hydrangea and of the wetland yellow iris growing in a roadside ditch. 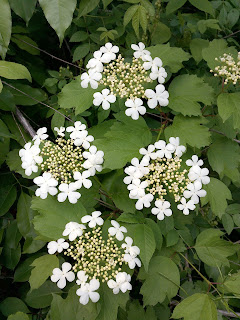 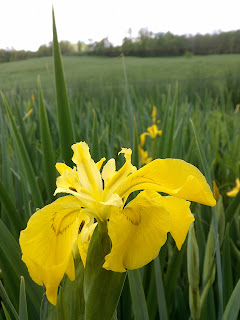 Below are the overview GPS tracks for the two days, followed by the five individual interactive segments generated on Wikiloc. 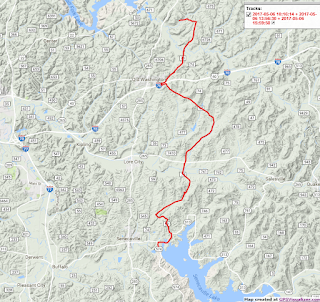 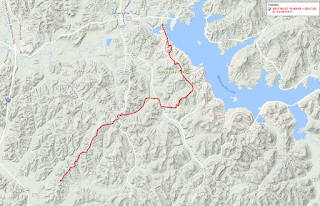 
All of the off road trail is included in the following segment:

The Saturday weather was cloudy and started rainy and ended with some showers, Sunday featured morning sun and a few later afternoon showers, but none of it was more than a slight nuisance.  Tomorrow threatens to be in the 30's but my van is doing some worse threatening.  I'm afraid my brakes are shot--horrendous noises coming from the right front wheel.  So I'm going to a repair shop first thing in the morning and will not be sorry to miss the chill.
Posted by PJ Wetzel at 4:41 PM