Can you see it?  It's in the gap in the trees above the mailbox, just a distant hazy silhouette.  A real mountain!

Hanging Rock State Park is the first mountain venue that the westbound Mountains-to-Sea (or should I say Sea-to-Mountains) Trail visits.  And I got my first glimpse of it today, still about 20 miles distant.

It came into view just after I crossed into Forsyth County, number sixteen in the County count. 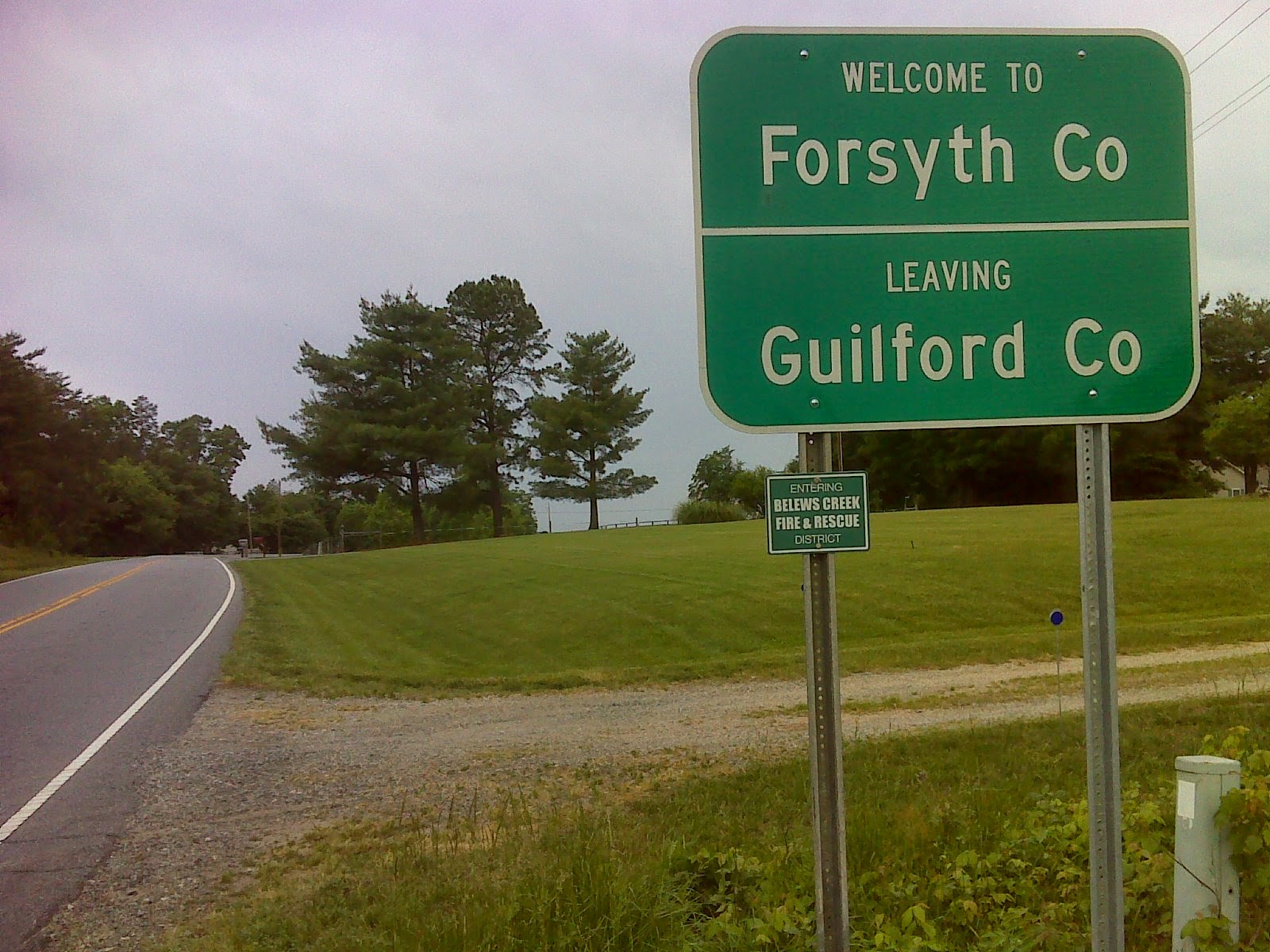 The day was all road walking, the weather was mostly cool because of some welcome sprinkles of rain.  And besides the momentary thrill of seeing a mountain, two themes developed to dominate the day's hike.  The first one is entirely trivial.  The second is a bit of Revolutionary War history set in Summerfield that would make a great Historical Novel.

Here's the trivial one.  I decided to begin a little photo-documentation of the twelve hats I wear.  Yes, I cycle through twelve ball-caps, wearing a different one daily.  The intention is to find some roadside 'model' to 'wear' the hat, and to have said model pose, prominently displaying the hat:


So this is Hat Number One - purchased at the Town Hall in Duncannon PA, right on the Appalachian Trail, in April 2012 as I was passing through town on my double thru-hike.

Okay - on to the Historical Novel.  The tale is a little complicated, but starts with the Bruce Monument on Summerfield Road, right in front of the elementary school and right across the street from the Bruce Family Cemetery plot.


Charles Bruce was a prominent Summerfield Citizen during the Revolutionary War era.  He was so prominent, in fact that Summerfield was formerly called Bruce's Cross Roads.

Now ... at the home of Charles Bruce, on the morning of February 12th, 1781 (there's some dispute about the date--it may have been the 11th or 13th), Colonel Otho Holland Williams and his 'Light Corps', including the now more famous "Light Horse Harry" Lee - Lt. Colonel Henry Lee, father of Robert E. Lee, were gathering for breakfast.  Among others present were the Corp's 14 year old Bugle Boy, James Gillies.

From here I'll let a Google Group member only identified as 'Catherine' tell the tale in a somewhat embellished form - (she's got the kernel of a great script for a Historical Novel!):

Before the hungry men could eat, a farmer, Isaac Wright, rode in with foam dripping from his pony and shouted to Colonel Lee  (more likely Williams, as described here by historian J. D. Lewis) that he had seen a party of British soldiers up the road (toward present-day Oak Ridge).  Lee (or Williams) immediately detailed Captain James Armstrong and his company to investigate.  With conditions as they were, Wright's word was held in doubt, and Lee (probably Williams) ordered him to go along as a guide with the searching party.  Wright replied that he did not have a horse fast enough to enable him to escape if the British soldiers were found in large numbers.

At this point, fate took a hand in the affairs of an anxious lad on the sidelines. Lee unhorsed his bugler and gave the horse to Wright.  As his horse was his only possession except his bugle, Gillies could not stand to see his horse taking off, so he jumped upon the farmer's flea-bitten pony and followed the soldiers.

After going two miles in the direction that Wright led them, there was no glimpse of the British.  Armstrong halted and accused Wright of being mistaken.  Wright said, "I may be mistaken as to the distance, but not as to the soldiers.  If you will send two men with me, I will go on and prove to you that I told the truth."  So Wright and two soldiers rode away and the boy rode with them.

They had not gone more than a mile when they came suddenly upon the British Dragoons.

The retreat and pursuit began.  Wright and the two soldiers had nothing to fear.  But the little bugler boy, riding with all his might, found the enemy gaining on him. Gillies was pulled from his pony and literally cut to pieces by the swords of the British.  Wright and his two men reached Captain Armstrong and told him what had happened.  The party rushed back to the rescue and found the Dragoons still grouped around the dying boy.  It was too late to save his life.  But a fierce fight took place, in which fourteen of the British were killed and the other made prisoner.

The sorrowing Bruce and his friends slipped away to find the pitiful little body of the bugler boy.  It was brought back to the Bruce home and buried in the family graveyard.  The seven British Dragoons, left sprawling after the fight, were thrown with little ceremony into a common grave.  The State sign erected on Summerfield Road marks the Bruce family cemetery, and the burial ground of Gillies, the Bugler Boy.

The fate of the bugler boy became one of the best known and immortalized chapters of the American Revolution in Guilford County.  In 1898, the Athenian and Philomathean Literary Societies of Oak Ridge Institute place a monument to his memory in Guilford Battle Ground National Park.  It reads,

"GILLIES.  Light Horse Harry Lee's Bugler Boy.  Dulce et decorum est pro patria more ("sweet and fitting it is to die for one's country").  Erected by the Literary Societies and Alumni of Oak Ridge Institute May 6th, 1898 to the memory of the gallant Gillies who fell under the swords of Tarleton's Dragoons near Oak Ridge, N.C. February 12th 1781, a noble sacrifice to his own generosity and for his country's freedom."

In 1922, the Guilford Battle Chapter of the D.A.R. erected a monument to Charles Bruce and to Gillies the Bugler Boy, which stands by Summerfield Road in front of the
present Summerfield Elementary School.  The south face reads,

Sometime after his death, a marker was placed on the spot where Gillies was killed, probably of soap stone, and in 1913 the student body of Oak Ridge Institute moved this marker to a spot in sight of the new macadam road from Oak Ridge to Summerifeld. This marker deteriorated and was replaced with a permanent granite monument by Robert Oscar Holt, a native of Oak Ridge, in 1939.  The monument is beautifully kept by the owner of the home in whose yard is stands, Frank Miller, Jr.

Just across the road, in 1941, the Joseph Kerner Chapter of the D.A.R. from Kernersville, erected a monument on the exact spot of Gillies' demise.  It is in a dell on the south side of the road, on the old road bed, and the area is kept cleared and beautified.  It reads:

Catherine is spot-on in her description of that little monument marking the exact spot of Gillies' demise.  It's really hard to see, in a shady spot well below road level with no possibility for cars to pull off to look, so I am lucky that I didn't miss it: 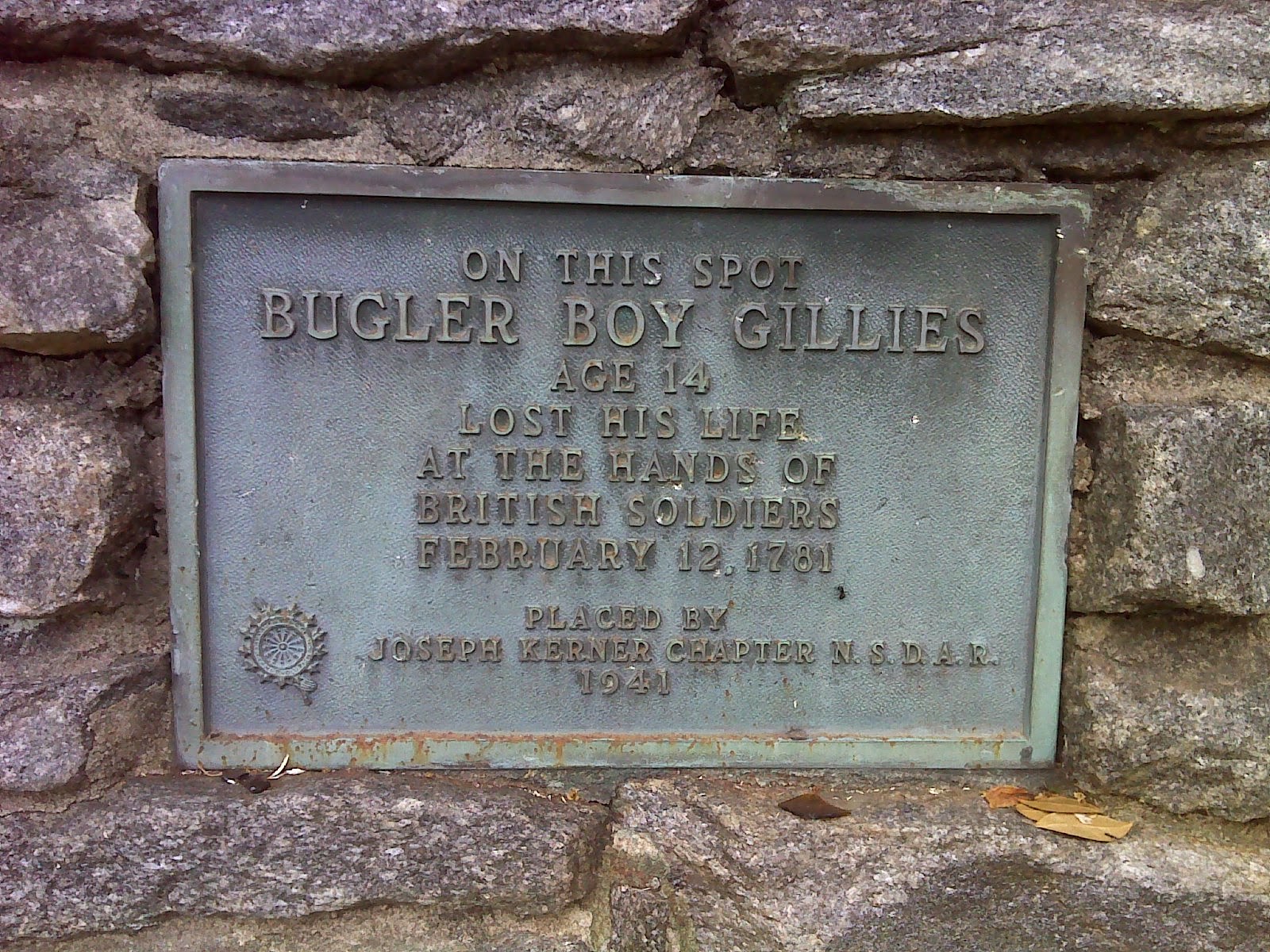 If you want to find it, it's on Oak Ridge Road (NC 150) near a power sub-station about a tenth of a mile east of where the MST turns on to Eversfield Rd.  It's on the south side of the road.  Thanks, Catherine and J.D. Lewis, for providing me with some in-depth local flavor to supplement my visual experience.


I got some in-depth local color too, in the form of one of the most purely blue flowers on the planet, the cornflower, Centauria cyanis, and its far less common purple variant: 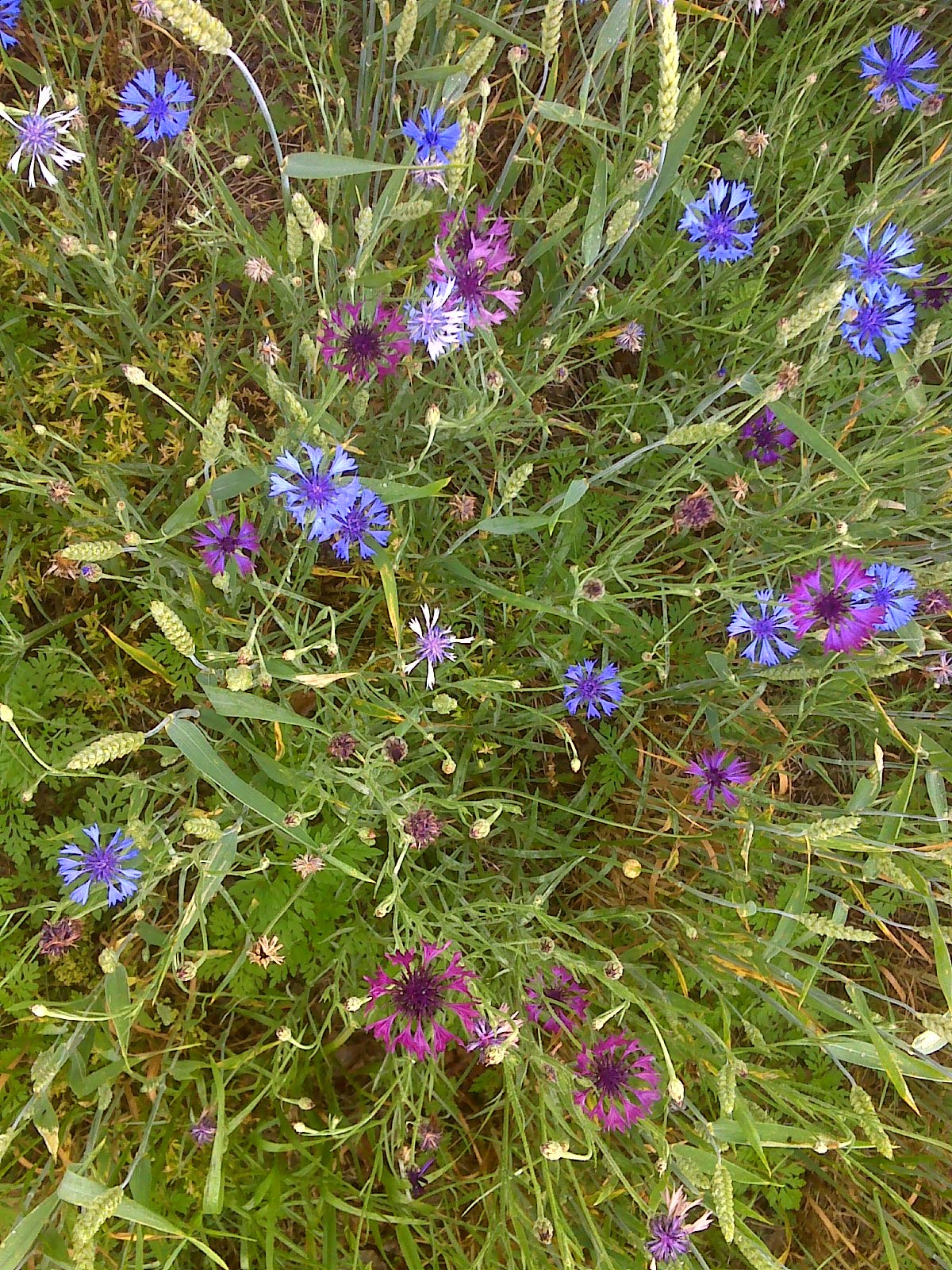 The trail has now passed out of the Cape Fear River watershed for good, and has moved into the Dan River basin, which is part of the Roanoke River watershed, and sprawling Belew's Lake is the first notable landmark therein: 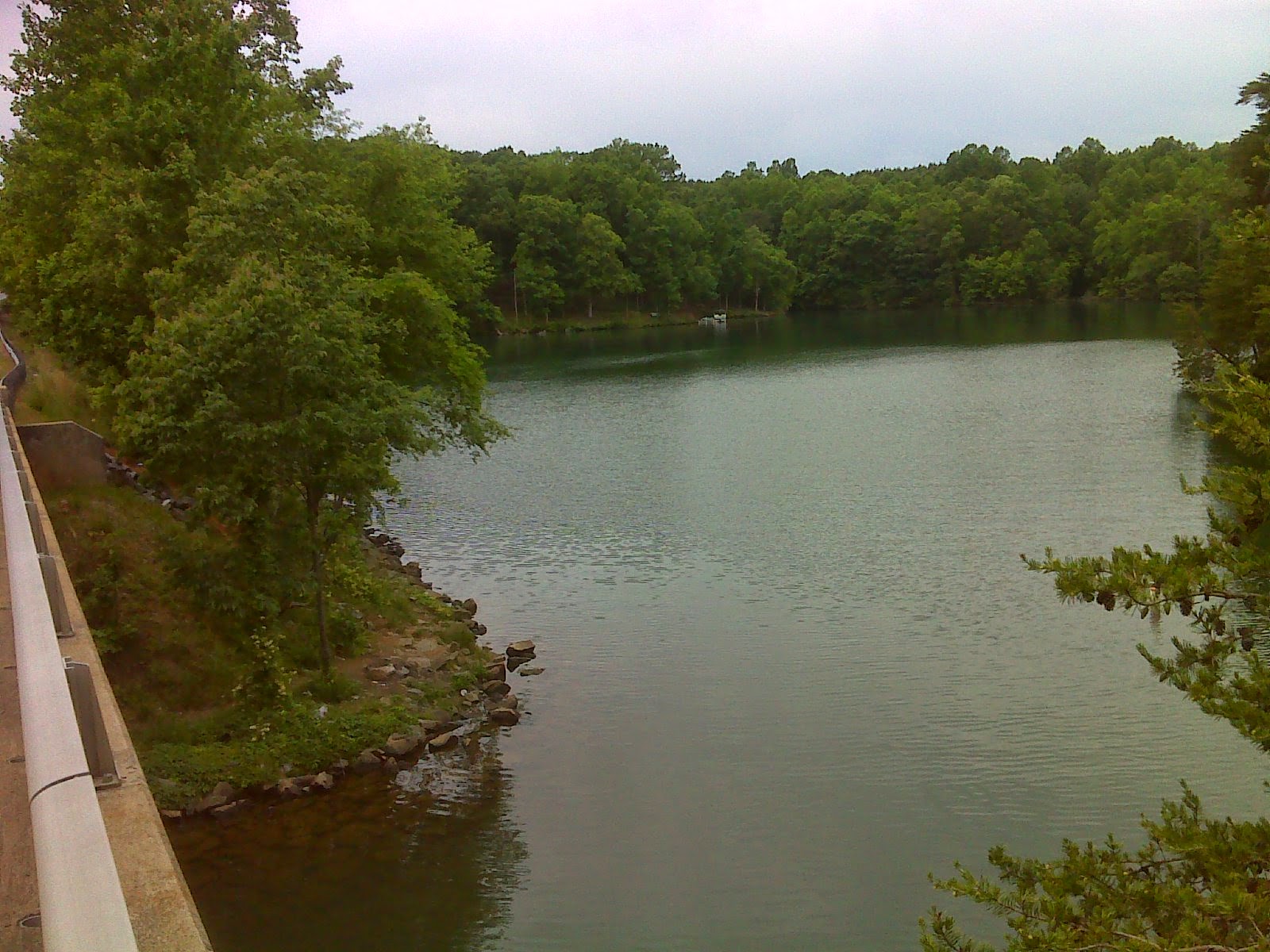 More road walking tomorrow, and I should be able to make it to the threshold of Hanging Rock State Park.  I'm very much looking forward to it!

Here's a map of today's hike with a link to a full slide show:


MST Day 56 - Summerfield and Stokesdale at EveryTrail
EveryTrail - Find the best Hiking near Greensboro, North Carolina
Posted by PJ Wetzel at 12:37 AM