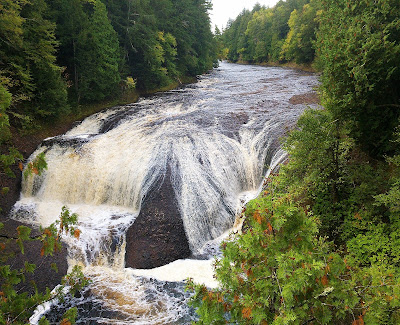 The last trail in the woods covered two big rivers and a sorry bit of trail connecting them.  I won't go into that because it appears a reroute is under active development.  I'll focus on the walks beside the Presque Isle and Black Rivers.  Here are the GPS Tracks. 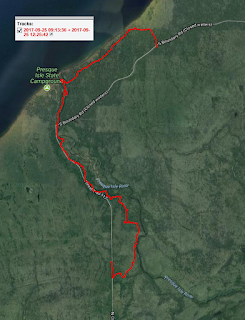 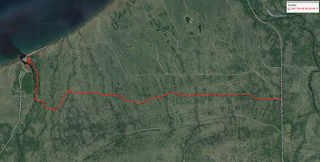 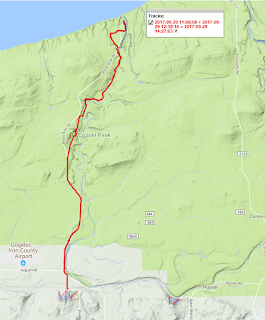 Waterfalls abounded.  Most of them happened where the rivers were carving their way through unusual conglomerate rock made of large rounded stones cemented together with silt and sand and time and heat.  Here's Hat number 89 with my walking stick and my hiking Crocs lounging on a fine example of that lumpy conglomerate. 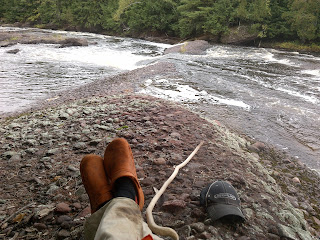 And here's Hat number 90 on the same sort of material at Rainbow Falls on the Presque Isle River. 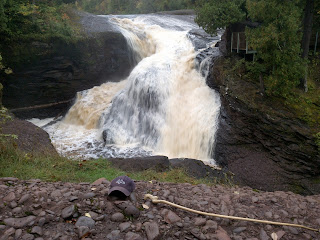 Not only is this the last of the woods trail in Michigan, but this is the last photo documenting my hat collection. (I can just about hear the sighs of relief.)

The waterfall collection continued, though, on the Black River.  The headline photo featured Potawatomie Falls.  Though it was not as photogenic on this dim cloudy day, Gorge Falls had by far the most gravitas, with its thundering sound and rising mists. 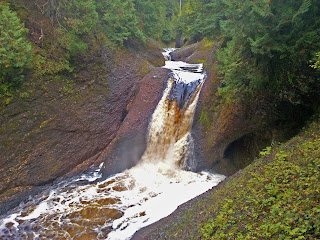 There were several others, but that is enough tumbling water for one post, and then I was out of the woods.

The road walk took me past Copper Peak's chairlift and ski jump hill. 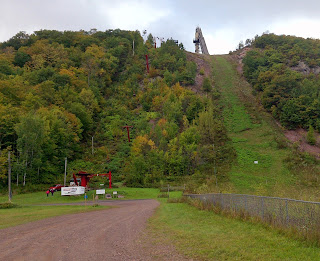 They don't have any other ski slopes there, just the jump.  But they do have a network of nicely maintained bike trails that I suggest the NCT ought to consider using. 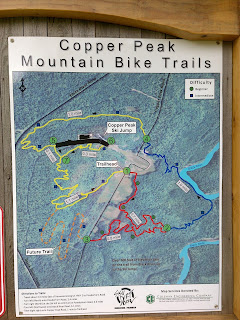 Connect points 3 and 4 and you'd have another nice 1.8 miles of trail in the woods.

From there, as you can see from the third of the GPS tracks, I hiked on south to Powderhorn Ski area.  From there I'm following the route of the Iron Belle Trail and deviating from the published map road walk of the North Country Trail.  I didn't even know the Iron Belle Trail existed until a couple weeks ago, but it turns out that I had been hiking it most of my way across Michigan.  It is Michigan's state trail.  It has a biking route and a separate hiking route.  It partners with the North Country Trail for the hiking route except at either end of the state.  It starts at Belle Isle in the Detroit River and it ends on a wonderful, brand-new paved bike trail that the official hiking route uses from near Powderhorn to the Wisconsin State Line in Ironwood.  More about this in my next report.