With 91 miles of well maintained trail and some of the best scenery this side of Pictured Rocks, Michigan's Porcupine Mountains Wilderness State Park deserves to be showcased.  There are plans on paper for the North Country Trail to someday be rerouted to take in the best of the Park, including the view shown above, but right now the trail skips along the south edge of the park, missing all of the mountains and views of Lake Superior like this: 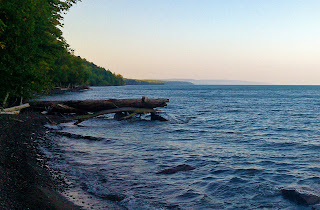 I couldn't pass up the opportunity to absorb all this beauty, so I fashioned my own hike through the park.  Here's the overview map of what I hiked and where it deviated from the NCT. 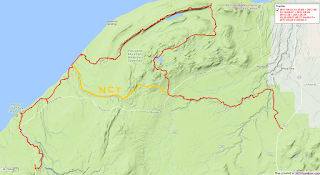 The Escarpment Trail, with its breathtaking views overlooking Lake of the Clouds, is the highlight of the park.  That's where the headline photo was taken.  This is trail worthy of the Gods.  Here is a sampling of more of the spectacular vistas. 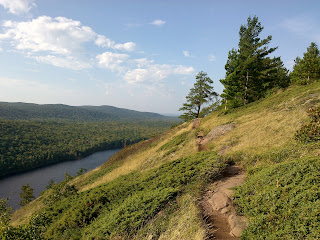 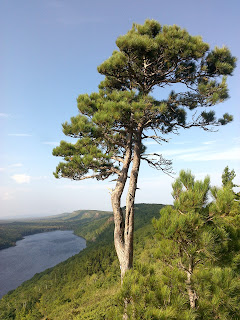 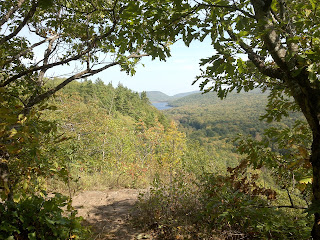 There was also this elevated glimpse of the Lake Superior Shoreline off to the east. 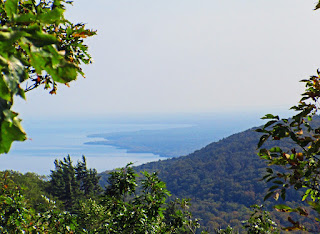 And the same four miles of trail also passed a rock outcrop that I'm calling Michigan's "Old Lady of the Mountains". 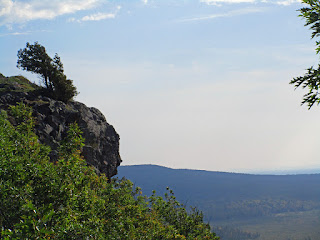 The ridge of exposed bedrock that allows all these views is glacier-smoothed solid bedrock.  Here Hat 87 and my walking stick highlight some glacier scratches, the signature of moving stones embedded in the glacier being scraped against the bedrock. 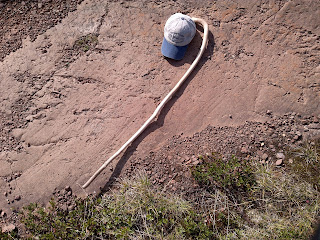 The scratches are from lower left to upper right, whereas the natural grain of the rock itself is oriented right to left here.

Off the escarpment there was some good gnarly trail.  This blaze seems to forewarn of the many climbs, up and down the banks of the river gorges and of course the mountains themselves. Getting down to the rivers meant several miles along the wonderfully noisy Big Carp River on the trail of the same name. 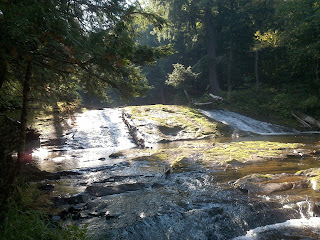 Along the Government Peak trail is another couple miles beside a frisky mountain stream with dozens of cascades, Trap Falls being the only named one. 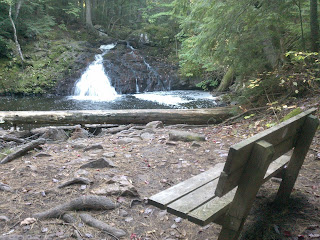 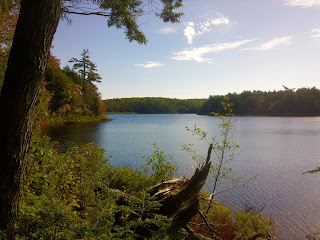 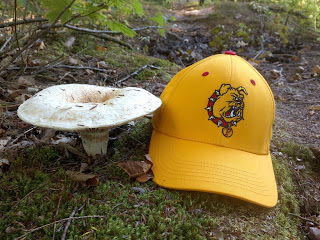 And with the maple leaves dropping, Hat 91, sporting the colors of my Dad's Alma Mater, found itself in its natural element.  Can you find it in this scene? 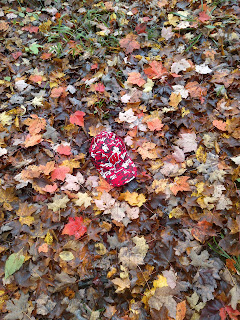 This park is truly special--a place truly worth preserving in its natural state. 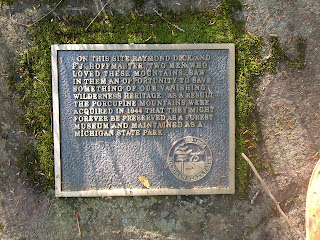 It all lies in primary forest, full of huge trees and not touched by loggers in ages; and the DNR has built a number of rustic cottages that are for rent, as are dozens of prepared primitive campsites with fire pits and bear poles.  It's the only place in Michigan that I've met backpackers out doing multi-day hikes, taking advantage of all this infrastructure.  It was so much fun to talk trail and not be talking to myself for a change.
Posted by PJ Wetzel at 2:31 PM