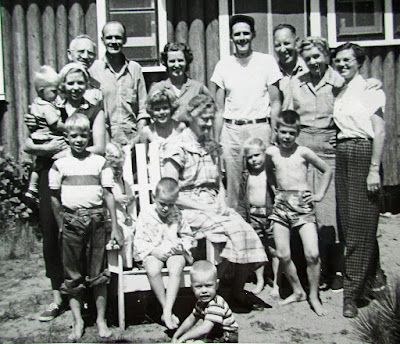 It's a smallish, unremarkable lake by Wisconsin standards.  It covers 175 acres, averages 17 feet deep, and is 40 feet deep at its deepest point, but the statistic that matters is that the Wetzel family vacationed there as many as twenty times between 1946 and sometime in the 1970's.

The photo above is from our 1954 family reunion in which we rented all three of the cottages owned by Margaret and Earl Barber on the northwest side of the lake.  In it are all four of my grandparents, all four of my aunts and uncles, and all six of my cousins.  I'm the kid in the chair holding a little cat.  The distinctive vertical log siding on the cottage has survived on two of the original three cottages.  Here are side-by-side photos of one of the cottages taken in the early '60's and the same cottage as I found it today.

I could write a whole post about my memories--the thrill of fighting small-mouth bass as they struck my lure trolling past the lily pads where they were lurking, the time I hiked into the woods alone, without telling anyone where I was going, and got so lost that I came closer to full-blown panic than ever before or since, bonding with my cousin Mark, closest to me in age, who we lost to a tragic accident in 1970, the ice man delivering a new block of ice for our old-fashioned ice box (before the owners upgraded to a real refrigerator), fresh fish dinners featuring the abundant walleye, bass, and perch that we caught, followed by playing the distinctive German card game 'Sheepshead' around the dining table.  I could go on and on.

The lake views are standard stuff, but here's my best shot of the waterfront where I spent countless summer hours as a kid.  The cottages are all hidden in the tall white pine trees. 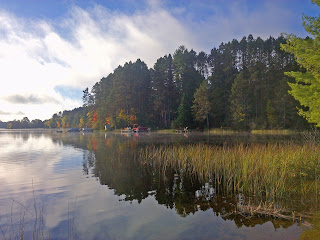 Hunter Lake is surrounded  by a lot of public forest land.  There aren't any genuine trails leading there, but Vilas County maintains forest roads and fire breaks that are almost as quiet and pleasant. 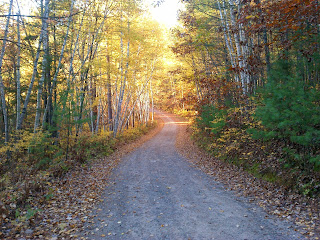 Here are the GPS tracks of the route I fashioned to follow all those forest roads from St. Germain and the last several miles of the Heart of Vilas Bike Trail to the mid-point of the 'Three Eagle' bike trail that starts in the bustling tourist town of Eagle River. 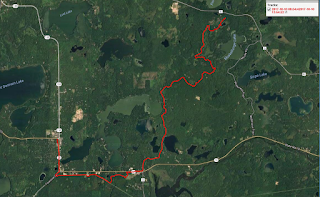 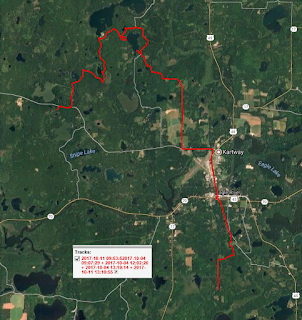 Back when we vacationed there the modern open-cockpit lightweight snowmobile as we know it had not yet been invented.  Its meteoric rise in popularity in this area has led Eagle River to call itself ... 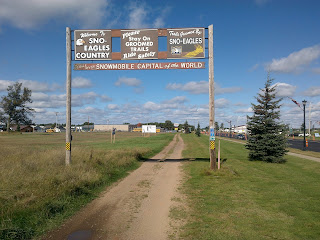 At the beginning of this segment I was hiking the last of the Heart of Vilas Bike Trail, which was the subject of my last post.  At the end I was on another bike trail that impressed me even more, although it is little more than 12 miles in total length.  It traverses Tara Lila, a large private holding of some very 'silent sport' friendly conservationists, who are building a network of snowshoe and cross country ski trails to complement the bike trail.  The bike trail itself features several impressive boardwalks crossing wetlands.  Here is the Four Women Boardwalk. 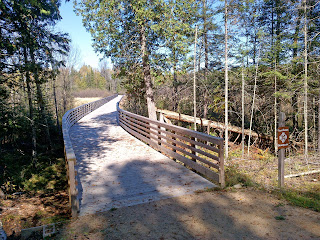 And that isn't even the best part of the Three Eagle Trail.  The good stuff came the next day, and I'll cover that in my next report.
Posted by PJ Wetzel at 3:01 PM