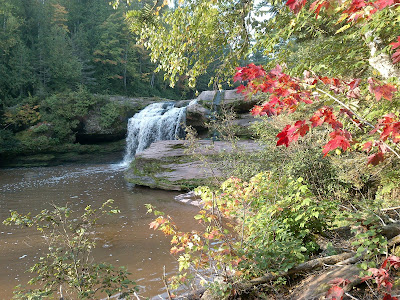 Another day of hiking Ottawa National Forest, with few breaks from 'green tunnel' trekking.  The highlight was definitely O Kun de Kun falls.  Named after a native American chief, this is a waterfall you can walk behind--my favorite kind.  But I didn't realize that until I looked at some of the online photos later.  I didn't explore the falls in depth while there because of the group of smoking, out-of-shape, middle aged folk crawling all over the area who had come down (illegally?) in a caravan of off-road-vehicles.  The really good places are often too popular, too trampled, and too crowded for my tastes.

I let Hat number 82 pose at another viewpoint and then headed on. 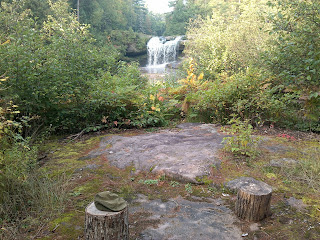 There's a huge sturdy suspension bridge over the Baltimore River that the national forest installed for hikers just below the falls. 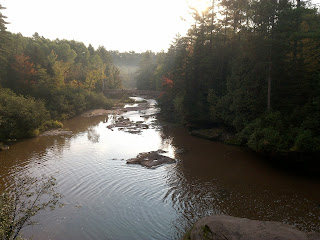 Yet very few people hike the NCT beyond the falls.  As soon as I crossed the trace of the trail became faint, and remained so.  Several miles on down the trail there's another, nearly identical footbridge over the Middle Branch of the Ontonagon River.


Ontonagon means 'I lost my bowl' in Ojibwa.  The legend goes that one of the women in Chief O Kun-de-Kun's band was washing bowls in the river when a sketchy looking, unkempt white man came by in a canoe asking about the name of this river.  She was so unnerved by the man that she dropped a bowl in the river and uttered the exclamation - and the name stuck.

But I digress.  This bridge, set deep in the remote wilderness of Ottawa National Forest, clearly gets very few hikers.  Other than the infrequent visit by local chapter maintainers, it seems that only long distance section hikers and thru-hikers bother with this nondescript section of trail.  Probably only five or ten per year.  Making a guess about the cost of this bridge, including the not inconsiderable cost of transporting the materials to this remote location, and assuming the bridge has been in place for 25 years, the math produces an amazing number.  The bridge cost the government about $2000 for every hiker that crosses it.

The rest of this day's hike was about what I saw in the woods.  A few nice mini-landscapes like this one. 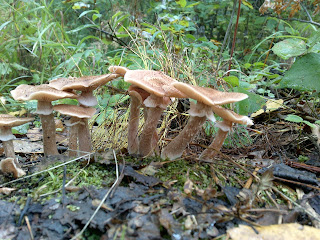 The second day covered in this report was cloudy and dreary after a heavy overnight severe thunderstorm.  I was supposed to ford another branch of the Ontonagon River this day, but because of the rain and the wet summer in general, I chose to do the high-water-bypass road walk instead. 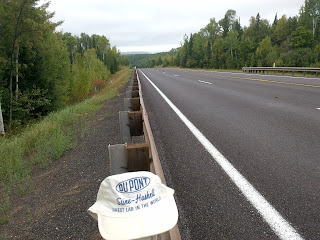 Hat 85 shows the weather, the traffic-free US 45 through this remote area, and a view of an area called the Military Hills, named, apparently, for the original purpose of this highway. 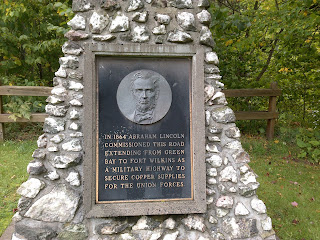 Here I got a look at the muddy river from the highway bridge; 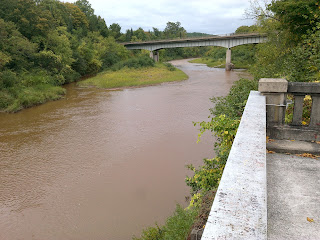 and that helped seal my decision to skip the ford.  As it turns out, taking the bypass may not have been necessary.  The ford is downstream of a dam, and is only dangerous when water is being released down the spillway.  Apparently the spillway has been closed lately, but I didn't know that until I talked to a local at the late 19th century log cabins of the Old Victoria mining town restoration later in the day 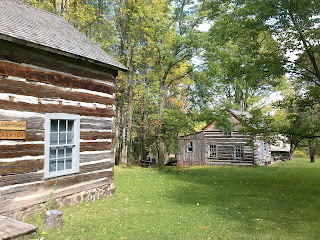 and then saw the dry spillway from a viewpoint the following day. 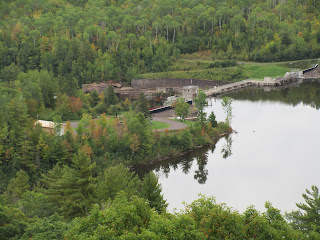 Here are the GPS Tracks of the two hikes, the first in the woods, the second all on roads until the last mile near Old Victoria.