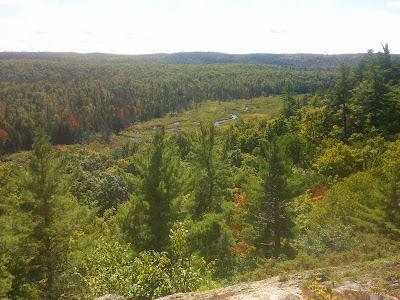 It was a long, tough day.  I had come to the first of the Michigan Mountains, and the country was so remote that I had eighteen miles to traverse between access points.  These were no milquetoast miles.  The terrain was a match for the Appalachians.  It rose to more than 1000 feet above Lake Superior, then kept plunging back down to cross boggy wetlands with no bridges or boardwalks, and then back up to the crests and escarpments.  The boggy areas were full of roots.  Some had serious streams that needed careful fording or risky rock hopping. 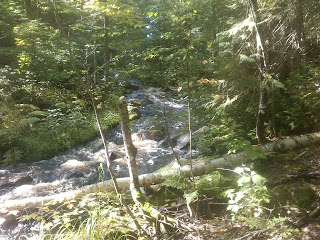 The slopes and ridges were rocky under foot.  To add to the challenge, for 6.6 miles in McCormick Wilderness there were no paint blazes, so good old fashioned tracking skills came in handy.  Fortunately there was a visible trampled track in most places and no side trails or forks.  Some simple cairns helped - just a stone or two on top of another.  There were occasional flat-cut sawn logs where maintainers had cleared away deadfalls.  But with all that, it was a relief to get through without getting lost.

The morning started out with frost. 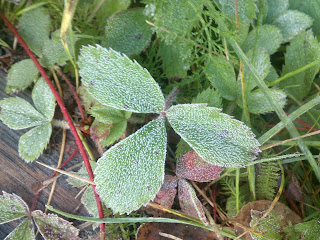 The advantage of the rugged terrain became apparent early, as I climbed up to the first vista, where Hat 74 got to pose. 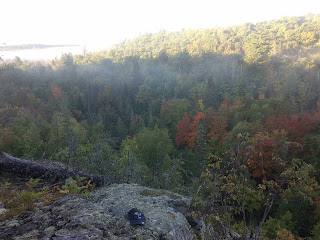 In the middle of the day there was one well-built foot bridge near a road that provided access to this roaring chute of angry water. 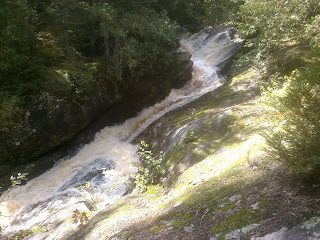 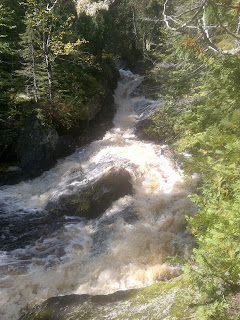 Mountain stream to be sure.

Besides the morning frost on the strawberry leaves shown above I caught a couple other of the small sights.  Here's a first (for me) from the fungus domain--sea-green mushroom caps with beige stems. 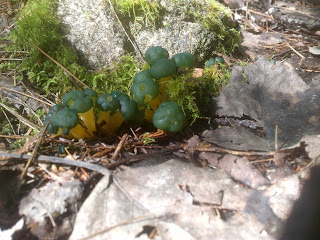 And the bottle gentians were blooming.  As the latest blooming flower of the year, they are a sure sign of fall. 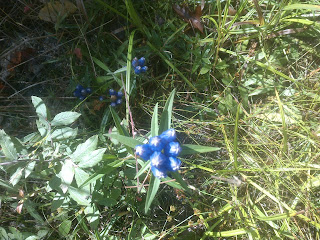 Here's the long winding GPS Track for the day, presented in interactive mode so you can zoom in for more detail.