Marquette - hats along the waterfront

It was a gorgeous cool day to walk Marquette's waterfront.  Much of it is public parkland.  A considerable section is sandy beach; and all of it, from Presque Isle well to the north to the Welcome Center three miles south, is connected by a paved bike-path/pedestrian-walk.  The North Country Trail uses much of that bike path, but diverts inland at Hawley Street toward the big Sports Complex and the extensive Noquemanon North trails network.

I got off the bike path and walked a long stretch of beach between the Harbor Lighthouse and Shiras Park. 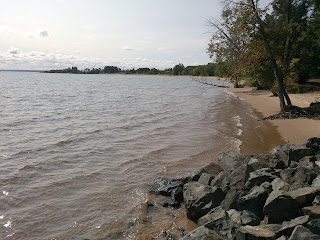 Along the way I found this guy stranded on the beach, in some sort of distress. 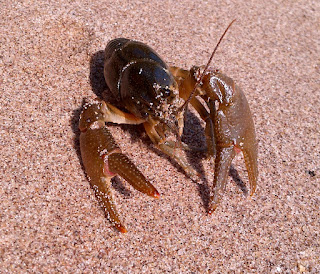 It's probably a rusty crayfish, and although it's native to Indiana, SW Ohio, and northern Kentucky, it's considered invasive here, displacing native crayfish species and reducing the abundance of some fish and aquatic plant populations.

Down at Mattson Park, the harbor area is dominated by this massive work of art 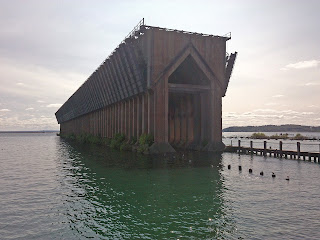 Well, actually it's an out-of-service ore dock used to load iron ore onto ships by gravity feed from above.

And speaking of iron ore, also along the waterfront at Mattson Park, stands this plaque honoring the local Vietnam War casualties. 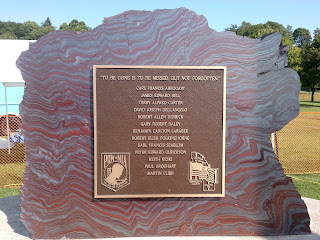 What prompted me to take the photo was the striking polished Banded-Iron-Formation rock that the plaque was mounted on.  The thing is 2.1 billion years old!  It dates from the era before earth's atmosphere had oxygen because all the oxygen that the early life created went to clear the acidic ocean of huge amounts of dissolved iron.  The resulting iron oxide settled on the sea floor in seasonal or other cyclical bands.

Although Marquette is a healthy, thriving town, it's notable that its population hasn't grown at all since the 1960's.  Long, cold, cloudy, snowy winters are surely the cause.  Marquette gets less than 80 hours of sunshine *per month* during the 'lake effect' months of November and December; and in Jaunary they get measurable snow on two days out of every three.

Marquette is a town that iron ore built.  Today the city continues to be known for shipping pre-processed pelletized iron ore, consisting of about 65% iron.  So much of the stuff is delivered to Presque Isle harbor by train that the tracks leading to the dock are littered with it. 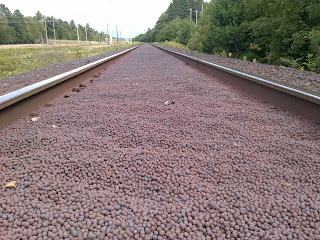 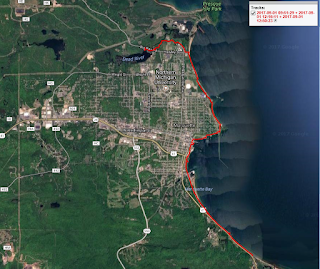 Today's walk was a little break from walking in the woods, but it doesn't last.  Since Marquette did not grow during the era of urban sprawl, it has no suburbs.  As you can see from the satellite view, the woods comes right up to the edge of town.
Posted by PJ Wetzel at 7:57 AM