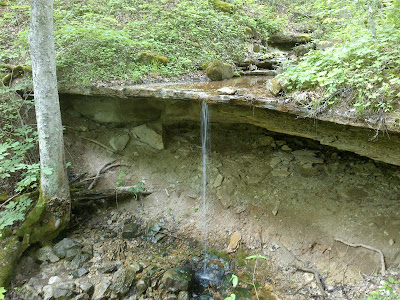 Reclaimed land.  It was land thoroughly raped by strip-mining, and most of the reclaiming appears to have been done by mother nature.  The huge multi-state American Electric Power owns the land, and it is of little use to anybody, so it didn't take much 'altruism' to open the land for what they call ReCreation.

Cynicism aside, the 25 miles of Buckeye Trail through their vast holdings in Noble and Morgan Counties, Ohio was the kind of wild experience that I crave.  Before I go into the report of my two days on AEP property I have to make a disclosure.

Just before entering AEP ReCreation Lands from the north, at the town of Belle Valley, the Buckeye Trail splits and offers two routes.  The 4600-mile North Country National Scenic Trail (NCT) follows the longer of the routes in order to pick up 32 miles of off-road trail in Wayne National Forest in far SE Ohio.  The other route takes the hiker through AEP's 25 miles of off-road trail.

When the North Country Trail chose their route, this AEP trail had not yet been opened, and now that it has, NCT has not chosen to consider a change here.

The problem with the North Country Trail route is that it requires 85 miles of road walking in order to access the Wayne National Forest woods walking.  Whereas the AEP route, which is much more direct, involves only 4 miles of road walk before re-connecting with the longer route.

Sorry, North Country Trail.  As is clear from the way I started this post, I chose to forsake you for the shorter route.  I've deviated before.  On the NCT I'm not striving to be a purist.

And I'm glad I made the choice I did.  As a major fan of waterfalls with pure free-fall that you can walk 360 degrees around and stay dry, I found the fifteen-foot-high fall shown as the headline photo to be the highlight of the 25 miles.  There was even another waterfall of 25 feet.  I could only get a look at the upper part of this one without some serious bushwhacking. 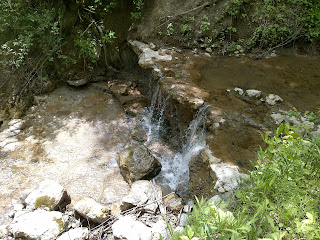 The second distinctive highlight was a half-decent long distance view from the top of an artificial cliff overlooking a strip-mined valley, where the birds were soaring. 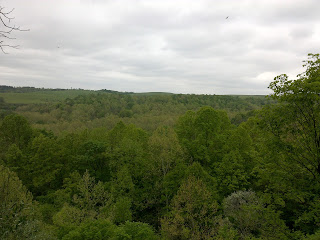 Ohio is pretty flat and getting more so as I move farther from the Appalachians, so having waterfalls and viewpoints is becoming more rare and precious all the time.

The third distinction of this AEP property is its multitude of strip-mine ponds. 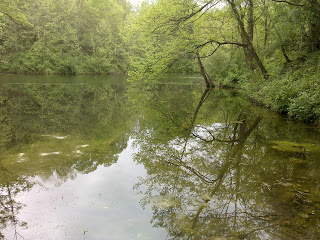 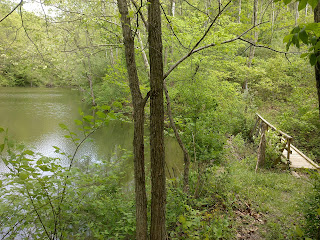 Typically they are a couple hundred feet wide and as much as a mile long, and there are dozens of them along with hundreds of smaller ones including lots of beaver ponds and wetlands. 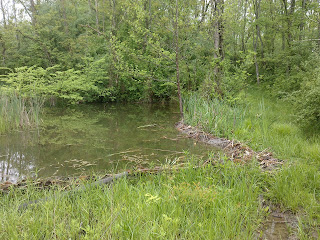 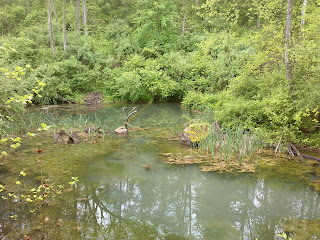 Otherwise the woods hiking was of two very different venues.  The first was in undisturbed upland woods on ground never mined because the seam of coal was too deeply buried.  These sections were pure joy to hike, but probably only consisted of a third of the hiking.  The second was on abandoned haul roads that now have wide grassy surfaces and went through young woods re-growing on ground that had been ripped up and moved around.  There were a few more open areas where the soil was so poor that their tree planting efforts hadn't taken yet. 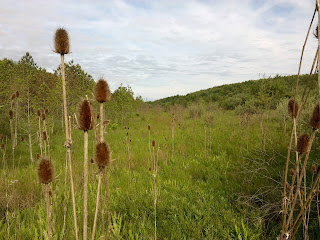 But otherwise it was just typical woods walking.  When walking along without views or water features, my eyes focus more on the little things. 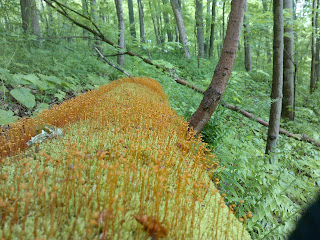 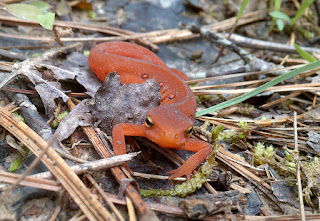 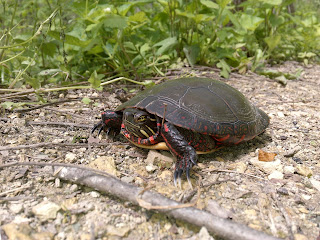 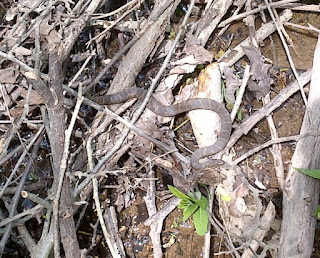 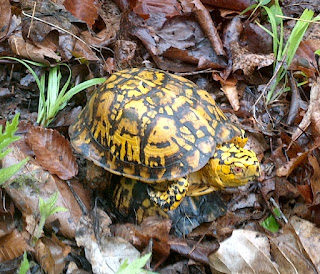 ... including a wild turkey egg that had gone astray, perhaps raided by a raccoon ... 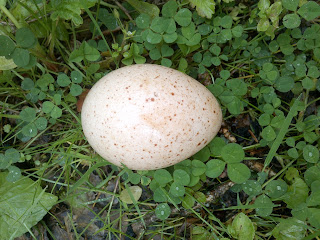 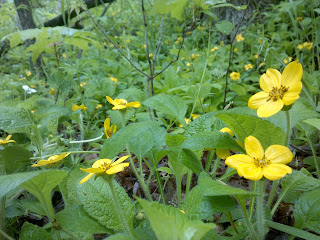 My van has been successfully repaired and the cost was less than I feared.  Weather during these two days in the AEP woods was far from ideal, being cloudy much of the time and with way too much wet foliage to trudge through, particularly on Wednesday, after an overnight rain.  But these are typical hiker challenges - the spice of life - the price we pay for those moments of pure wonderment and bliss.  No complaints.

Below are the screen shots of the GPS tracks overlaid on terrain, where you can see the strip mined areas snaking across the landscape. 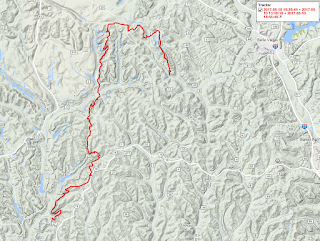 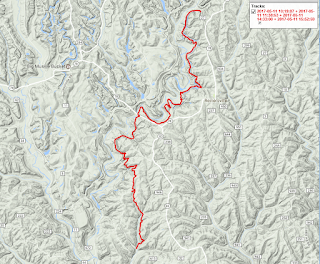 And instead of presenting seven different interactive Wikiloc segment maps for these two days of hiking, I'm just presenting the overview map.  To see the latest tracks just zoom in on the tail end in Ohio.