Craggy Gardens is one of North Carolina's mysterious high mountain summit balds--peaks and ridges that are free of trees even though the climate is warm enough to support them.  Nobody knows for sure why these false-tundra remnants of the ice age linger on selected summits in the southern Appalachians.  But whatever the explanation, I love them.  The Roan High Balds on the Appalachian Trail are larger and 'balder,' but as I hiked from Rattlesnake Lodge to Glassmine Falls Overlook, that section of the Mountains-to-Sea Trail instantly leapt to the top of my favorites list.

Ecologically they call Craggy Gardens a 'rhododendron heath' because the prominent plant is the pink flowered Catawba Rhododendron.  What I found as I hiked through in late July was that there are also loads of blueberry bushes and the first of these yummy juicy sweet treats were ripe!

What I like most about hiking these open high ridges is that I'm out of the 'Green Tunnel.'   There are constant views of the surrounding country and of the weather.  The views were prodigious, but in this hike report I'll show just two examples--the view from Lane Pinnacle on a clear Sunday morning, and a view of Mt. Mitchell from near the summit of Bullhead Mountain.  I've put many more views and general trail scenes on the EveryTrail trip report linked to via the map at the end.  Each of the little red 'push pins' there represents a photo, and most are not shown here because ... 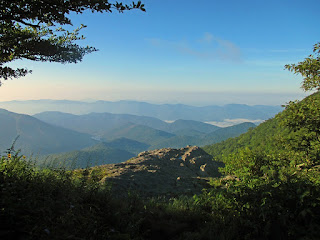 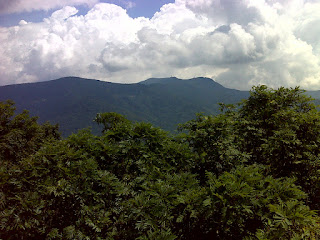 ... because the primary focus of this report will be a photo-tour of the abundant mid-summer bloom, both along the Parkway and on the trail.  Late July at lower elevations is not so colorful.  The spring flowers are done and fall leaf change is still a distant prospect.  But up above about 5300 feet, where all the following photos were taken, I felt as though I was constantly walking through a flower garden.  At first I just looked, but as I began to note the variety and abundance of bloom, I felt the urge to begin taking photos of each new species I saw blooming, just in order to have a record for future reference.  It became a project, lasting three days--stop and smell the flowers!

The photos go somewhat beyond just flowers, as it turns out.  I've spent quite a bit of time selecting and preparing about fifty of the best shots.  All these photos were taken during three consecutive days of hiking.  Not all the species have been identified, but check the captions for my best guess at species or common name.  Enjoy.
﻿

Below is a map of the trails and Parkway hiking that produced the above show: