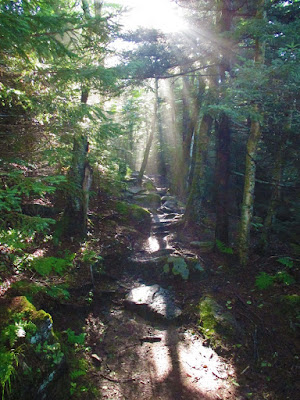 I love hiking early in the morning.  It's a time that I can hear my heart and feel my breath.  The wind goes quiet and the smell of earth and green is in the air.  Leaves are dripping the last remnant of the sun-fueled thunderstorms of yesterday.  The moss drinks in the dew, the wood thrush serenades me with her territorial claims, and the sun fills the forest with filaments of fresh-risen mist.

It was a magical time, this particular morning.  Before me the gates of heaven seemed to be opening, luring me upward as I climbed to the highest point that was part of the United States prior to the Louisiana Purchase.

And when I got there I had the place all to myself! 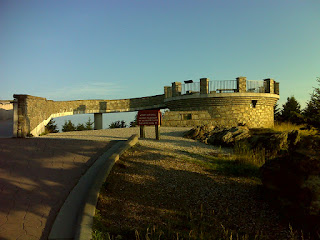 Mount Mitchell is a popular tourist destination because the hike to the summit from the parking lot, gift shop, and concession stand is a gradually-graded quarter mile stroll.

But tourists are not early birds,  I got there soon after the gate opened at 7AM and did a loop hike with 1000 feet of descending on the Mitchell Trail, a half-mile connection on the blueberry lined Commissary Trail, 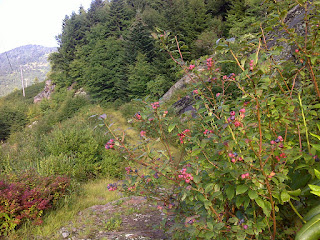 and 1000 feet of climbing on the Camp Alice and Old Mitchell Trails.  And when I got back to the stadium-sized summit parking lot at 10AM there were still only a handful of cars.

A dozen eager day hikers were gathering for a Carolina Mountain Club "Mount Mitchell Ramble".  Four teen girls couldn't find the start of the summit trail.  An older couple cruised up in their snazzy top-down BMW convertible.  A trio of rolling-thunder Harley riders arrived, seeming to be expecting more companions.  I could hear the rumble down below.

The world was waking.  Time for me to move on and find a quieter piece of trail.

The day before I had hiked up from Balsam Gap, where I found definitive proof that hiking can slim your figure.


On the way down from Blackstock Knob I paused to emblazon a mossy trailside log with a bit of guidance for those who would come after. 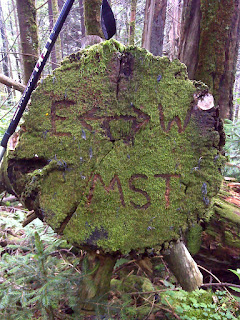 And I strolled the Parkway high above Asheville's scrupulously pristine watershed. 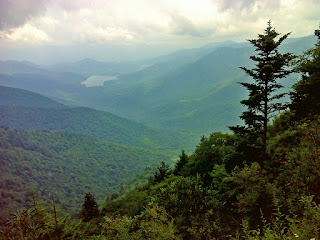 Surely no city east of the Rockies has more control over the source of their water.  It's probably why several big western mega-craft brewers such as Sierra Nevada and New Belgium are flocking there to build east-coast breweries.  Once the rain hits the ground it's protected like gold in Fort Knox.  Unfortunately Asheville has no control over what's in the rain, and their population contributes its share to the toxic sputum that taints the rainclouds. 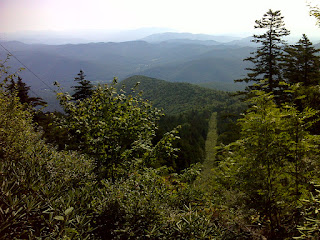 On the east side, the following day, I came the rest of the way down the venerable old Mitchell Trail to Black Mountain Campground.  This is a trail that is much older than the MST, and its 3700 foot climb over 5.8 miles from campground to summit has long been a popular day hike for the ambitious and the eager, the fit and the foolhardy.  The unwary and inexperienced will find that the descent is tougher on the legs, especially the knees, than the climb.  There is a set of subtle skills to descending for long distances that only seasoned hikers learn.  Vary your stride, walk bent at the waist at times, walk sideways for a while, let your weight fall rather than using muscles to control it.  These are techniques that are easier to do than to describe, but they do not come naturally.  They are usually learned the hard way.

The Mitchell trail shows its age.  It is deeply rutted by a hundred years of trampling and erosion, exposing the raw flesh of clay subsoil and the bones of tree and mountain--roots and bedrock.  It's very reminiscent of many of the popular trails in the White Mountains of New Hampshire, both in the vegetation and the character of the footing.

In the middle of this ascent/descent, the MST shows the observant hiker the contrast between old and new trail.  Between 4300 and 4800 feet elevation there is an alternative, amateur/volunteer-constructed new trail called the Higgins Bald trail (though there's no actual bald).  I wouldn't recommend this detour, since I enjoyed the Mitchell Trail alternative much more despite the erosion, but for reasons that escape me, the MST routes the hiker up/down Higgins Bald instead.

At the end of the day, down in the valley, Black Mountain Campground got my attention.  I decided to stay the night when I learned that my National Parks Golden Age pass gave me a tent site for half price - $11 for a tent pad, fire ring, drinking water, super-clean hot showers and flush toilets, and a store that sells t-shirts and ice cream, not to mention the Toe River rushing past, with its fishing and splashing opportunities.   Here's where it literally pays to be old.

Below is a map of my ramblings during three days of out-and-back day hikes centered on Mt. Mitchell: