I love Asheville.  If I chose to live in any city east of the Mississippi, Asheville would be it.  It's the east's answer to Boulder, Colorado near which I lived in a previous life (before legalized pot and craft breweries).  Asheville is full of amazing, interesting people and exciting cultural experiences, and it boasts unrivaled natural beauty on its doorstep. 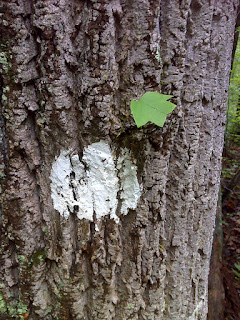 The white-circle-blazed Mountains-to-Sea Trail and it's motorway cousin, the Blue Ridge Parkway, exemplify that beauty.  The nearly nineteen miles of MST that run in a semicircle around Asheville's south side from the French Broad River to Craven Gap features pleasant quiet walks through mid-latitude hardwood forest.  (The species of tree in the photo above does not occur above about 3500 feet, can you identify it?)  There aren't a lot of spectacular photo opportunities.  The serenity and simplicity of the setting are the attractions.  The trail is popular among morning joggers, and it gets busy again in the afternoons, hosting after-work strolls to unwind and decompress.

Unwind and decompress--necessities for city life.  This is why I will not move to Asheville.  It is, in the end, a city.  All cities have too much crowding and congestion and noise for me.  Even the Blue Ridge Parkway is crowded here.  Locals use it to get around town.

The MST uses the Blue Ridge Parkway corridor to do the same thing -- to get around Asheville.

Long distance hiking trails respond to cities in one of two ways--either avoiding them, sort of pretending they don't exist by seeking wilderness-like corridors, or embracing them by plunging fearlessly into the city's core using urban greenways.  I like both.  The MST and the Appalachian Trail do both at various places along their routes.  But here, around Asheville, it's all avoidance - a good kind, and very successfully done.

So let's talk about the people for a minute.  The people I meet on trails are usually kindred spirits, coming to the wild to seek some of the same things that I'm here to find.  So it's always fun to chat with them and discover their 'story'.

Everybody has a story - a narrative to which they self-identify.  And I believe that any randomly selected pair of strangers will discover that they have common threads to their stories.

That's especially true for me when I'm hiking a footpath through the woods or high on a mountain.  When I met Heather and little Iona at the overlook above the Parkway's Haw Creek Valley Overlook (MP 380 - photo up top), the conversation began by discussing Iona's weight and the exercise benefits of 'backpacking' your child.  But before long we discovered that Heather "grew up on Topsail Island" where I live!  Her family owns a cottage there, and though she now lives in the Asheville area, she still goes back there regularly to get her beach fix.

I was hiking Asheville on a weekend, so locals were abundant.  And it was a summer weekend, so out-of-state tourists were also in abundance.  I had many conversations, and even hiked for a mile or so with Tim, originally from West Palm Beach, Florida, who has recently chosen Asheville to settle with his young family.  His wife and three daughters were back 'home' visiting in Florida that weekend, so he was taking the opportunity to hike at his own pace.  He, too, usually hikes with his youngest on his back and his three-year-old setting the pace.  I remarked that my pace these days is probably not much faster, to which Tim graciously did not respond.  He also likes to discover the stories of strangers, so our conversation wove back and forth, forming a tapestry of connecting threads between our lives.  It was a wonderful magical half hour.

Now a little about the natural setting.  As I said, I don't have many distinctive photos to share, but here's one of a 'shedding shroom' 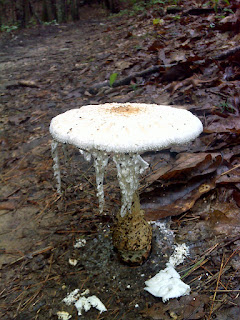 And here's the look at the French Broad River from the MST/Parkway bridge. 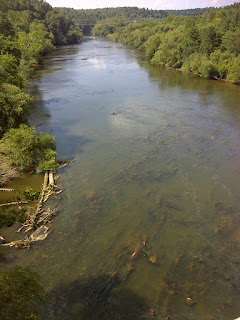 The MST crosses the Swannanoa River in a much more interesting way.  It goes under the parkway, crossing this grassy meadow that is the flood-plain of the river, then crosses the river on a little old bridge that leads to dead end roads and a tunnel under I-40. 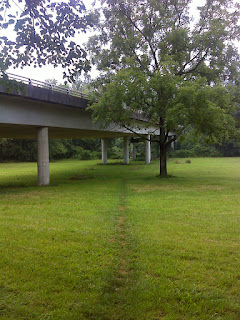 The only other scenery of note was that overlook where I met Heather.  Here's the view straight out over the valley. 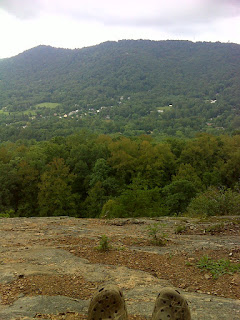 And finally a quick note about culture.  The MST is routed right past the front door of the Folk Art Center, and a stop there is worth the time.  But since they don't even allow photography inside, and since I'm not much for indoor 'museums', I'll simply say that the place is huge, beautifully laid-out, and the staff people I interacted with were enthusiastic, pro-actively helpful, and genuinely pleased to engage me in conversation.

I think it goes with the territory.  How can you not help but have a positive outlook on life when you live in a place like this?  Asheville, I'll be back.

Here's a map of the way around town, with links to a few more photos.  Unfortunately I lost (accidentally deleted) a small piece of the track in the vicinity of the Parkway Visitor Center.  I guess I'll have to go back and hike it again so I can 'prove' I did it :-/