The Pinhoti Trail, it's a biker's trail.


The Bear Creek network of Mountain Biking trails is one of the best in Georgia.  So says Tre, an avid biker who was out training for the Sept. 19th Fools Gold 100 ultra endurance race in Dahlonega (where the other great network of trails is located).

The Pinhoti Trail is part of this network.  All of it is open to bikers in this area, and it was a weekend, so I encountered a two or three dozen riders.

"Hiker!" the lead biker of a group shouts, startled, as he whips around a corner and spots me already standing aside.  I heard him long before I saw him.  It's quiet in the woods when you're walking.

A stream of the leader's companions come roaring by with a whirr of chain, the thumping of knobby tires, and a gust of wind.  Each one has a "hi" or "enjoy your hike" or my favorite "nice beard."

The vast majority are males (I saw only one female), and they're getting an adrenaline rush out of the breakneck speed riding the downhill sections, and an endorphin rush from pumping the pedals on the uphill parts.

It looks like fun, and as an added benefit the trails wind through some gorgeous scenery, with noisy cascading streams plunging through deep shady ravines. 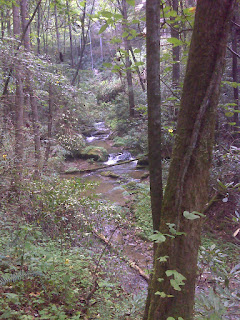 But somehow I think all that beauty is wasted on them as they whiz along, conveyed by their mechanical contraptions.  I'm sure they'd disagree.

To each his own.  I like the quiet of my walking pace.  I see the little things.  The fungi that look like ice crystals 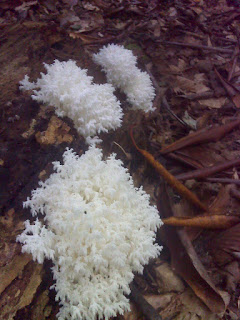 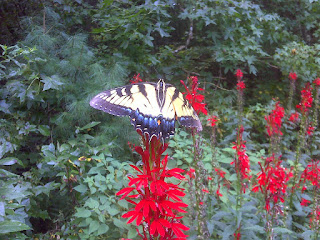 There are spots where those bikers who are in less of a hurry might stop.  The massive old Gennett Poplar.  Tulip poplars are a fast growing species, and they don't usually age this well.  I planted one as a tiny seedling when I was nine years old and it's trunk is now four feet in diameter and it's dying.  This one has far outlived the majority of its kind. 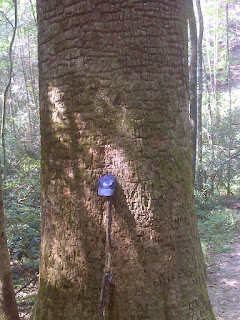 Not on the Pinhoti Trail but on my return road-walk, I passed this panoramic viewpoint and another like it 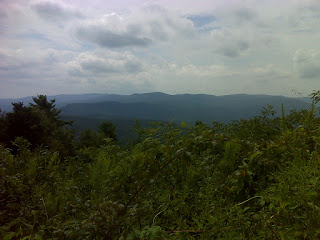 Trail built primarily for bikers doesn't have some of the steep rocky footing that hiker-only trails present.  The surface is generally smoother and more gently graded, so it's fast walking.  Where trail crosses a stream, there are likely not to be stepping stones.  They just get in the way for bikers.  So in the first dozen or so miles of Pinhoti Trail I had half a dozen fords to negotiate.  Here are two very different examples.  Wide and slow moving Jack's River, and a much shorter ford above a cascade on Crenshaw Branch. 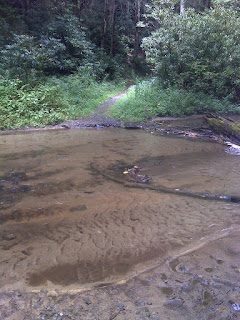 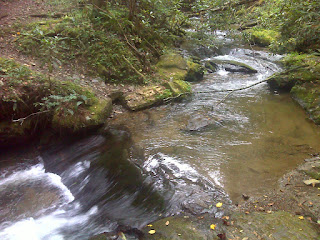 And with the exception of the climb up over 3200 foot Buddy Cove Gap, the trail kept to lower elevations, ranging from 1700 feet to no higher than 2400 feet through this first section of Georgia's Pinhoti Trail.  Definitely a different experience from the Benton MacKaye, and different is good.  I look forward to more.

Here's the map of the route I traveled in two segments over a day and a half.  For a few miles of the road 'walk' I got a ride with Bret and Paul who had to abandon their biking when Paul's chain broke, and later with a young couple headed to Lake Conasauga.  It would have been a 24 mile day without their help.